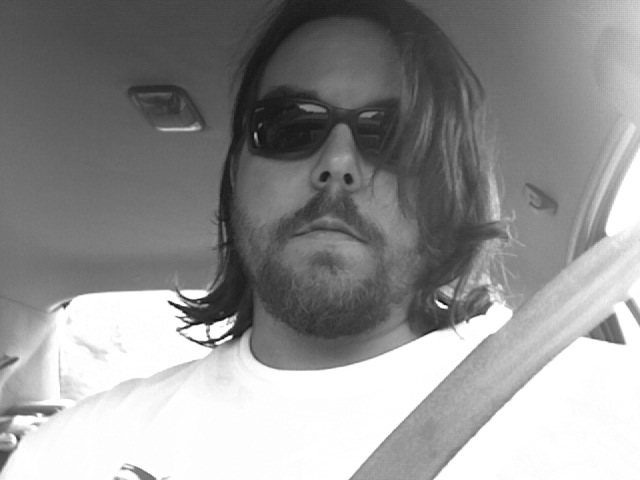 If you're an artist, what kind of art do you make?
Installation, Sculpture

I am...
I am a husband, father, sculptor, and lecturer. I work in many mediums from paper to steel. I love blue jeans, white t-shirts, and steel-toe boots. I have a beard, long hair, and tattoos, and my students say I don't look like a teacher. I am a co founder of an incredible artist studio in Boone, NC, the Collective on Depot.

About my artwork
My sculpture is inspired by ancient civilizations, world religions, and primitive art. My work revolves around the altar and its infinite forms. I explore the similarities between the altar and the object, and ask the viewer to personally determine the difference between the two. Form and craftsmanship is very important to me, and I believe beauty in art is an extension of God. (Check out my flickr site for pics of my work)

What exhibitions are good at the moment?
PS1 was pretty captivating and Socrates Park is always interesting. I'm not that interested in Jeff Koons, but his work on top of the Met was pretty amazing.

Centre of the artworld:
my studio, online

AHMED SHALABY said…
A new method of sculpting the wall.

I hop products my Wall sculpture art (or sell it).

Wall sculpturing art is a subject to fixed standards and measurements but here our artist has another imagination where he used thickness not exceed than one centimeter with different width and heights.

Here creativity appears because it transmits the viewer to a live wall sculpturing through the reflected light on work, so it gives unreal deepness (sight Illusion).

The artist used this new technique that was originated by nature since 1982 in his earliest shape until it reached spontaneously to what it is now.

Then at the top of the page you'll see something that says All Topics. click there and you can either click on Arts which is already a topic. or what I do is go to search bar and type Sculpting....

then click stumble in the top left corner of the page. you'll find alot of cool things.

I found of interesting sculptors on there.

Hope you're summer is going great!

Stacy Tompkins said…
Thanks! I'm glad you like the work. Your pieces are quite nice as well. I love the combination of textures and the natural look to the pieces, great color palette too.....beautiful. :)

Michael Bowdidge said…
Thanks for your comments here and on Flickr Sean - they're much appreciated. I'm looking forward to seeing your new work.

Mark Dicey said…
Hey Sean,
wow I like the way you think (at least from what I see through your work!). great free exploration reacting to your materials. Poetic. The walker/confessional piece and box spring piece are a gas! (just to mention a few). good to see and I look forward to seeing more. Mark.

mari said…
How you mix the materials, put them together- I really like it. It is soft and hard at the same time, powerful but subtle, mysterious but also direct in a way.

Mik Godley said…
Hello Sean!
I'll have to try and get back to you when I've looked through your Flickr site - probably over the weekend. I'm afraid I've run out of time tonight - too much on with all the teaching at the moment I'm afraid. I guess you know how that is?
Catch you later.
Mik

I've had a good look through the work you've posted here (though admittedly not your Flickr site - do flag something up if you feel I ought not miss it) which I found very interesting - you have an obvious eastern influence to your aesthetic.

Actually your interest in altars kind of connects to something I was working on until about five years ago, a couple of examples of which I have on another site (see here and here)
the first part of a fairly large body of paintings looking at ideas of and from altarpieces (yeah - not the same as altars, but close); the second a slight tangent from that - though also from a body of several works - after seeing - and being totally gobsmacked by - a retrospective show of James Lee Byars in Hanover, Germany, having never heard of him before (I must have led a very sheltered life).

I've moved away from those concerns, as my Silesia project hit me and whisked me away, but I imagine I will return to thoughts on altarpieces at some stage - though probably very differently.

Anyway, good stuff, and nice use of materials... And you've been in touch with Lewthwaite too - at this rate we'll have to make you an honorary Nottingham Artist!

By the way - I probably look every inch an art-lecturer, though I've given up on the shaved head look these days - I've got used to the idea of living up to the stereotype... well maybe a little. They keep asking me things like what music I listen to, but I don't tell 'em these days - it might frighten them!

mike hinc said…
Good to meet you too. I like your stuff.