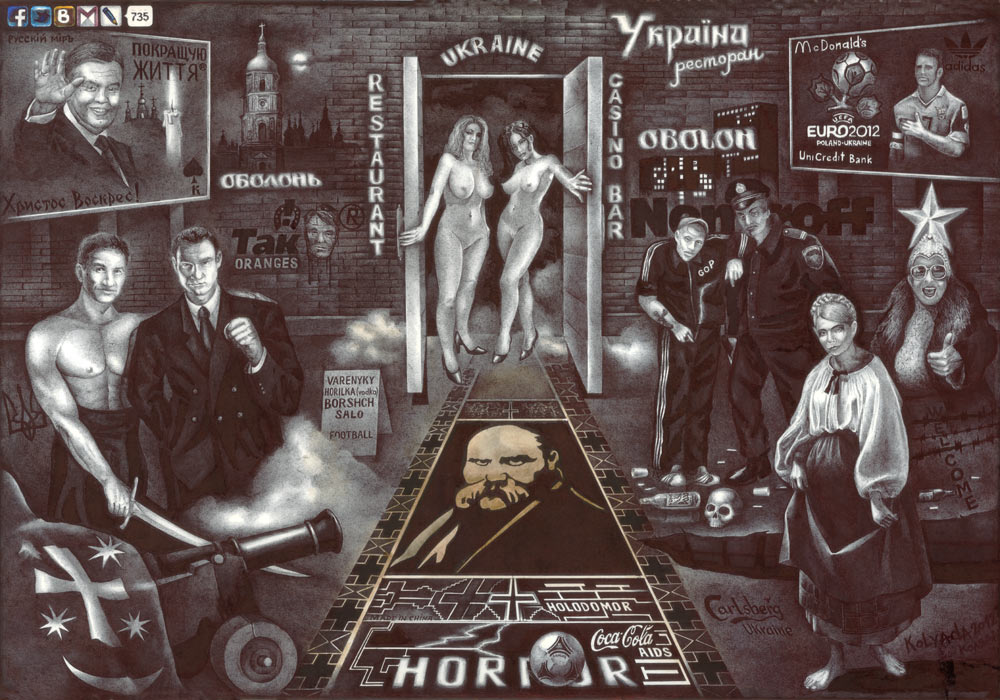 "Serhiy Kolyada got in hot water with Kyiv's art establishment with his ballpoint-on-construction paper productions, portraying Kyiv as a melancholy zone of shadows. Check out his Web site (www.kolyada.com) to see his nude or semi-nude women depicted against shadowy backgrounds of corporate slogans. It's art as social commentary: gutsy reflections on money, power and gender issues in Ukraine." ( "50 Great Things About Kyiv" KYIV POST, Oct 20, 2004) *By Florian Bardou
I try to show the true daily life of Ukraine in a postmodern way, taking images of traditional Ukrainian culture and art (but not only Ukrainian) and mixing them with today’s images of pop-culture. I define my art as a postmodern work. I use a ball-point pen on paper, sometimes adding watercolors or collage details. Also, I still have problems with censorship here in Ukraine. Even if I organized my own shows, some of my paintings would still not be accepted. So, actually, my art is still underground..

I was born in Odessa, Ukraine, in 1972. During my childhood I attended drawing classes at the State Art studio and continued while I was studying at the University. I tried to spend all the free time I had drawing. In 1989, I was part of the State University of Foreign Languages in Zaporizhzhya, but in 1991 I was excluded from the University for taking place in democratic anti-communist regime campaigns and I went to Sweden to ask for political asylum. Ukraine got the independence few months later and I came back.