Reflecting reality, system: An analysis of a Delier exhibtion

According to the German philosopher Martin Heidegger, a work of art gives an audience a starting point (punchline) to think about the “reality” and the “thing,” because Heidegger considers the reality of art as “the coming of reality.” The concept of “approaching reality” occurs in the work of art.

Not every work of art reflects reality onto the audience. Hence, the fine line between the “hard-boiled realism” and the sense of humor in artwork is something hard to create.

However, Burak Delier, a Turkish artist, succeeds when reflecting the sense of his work of art to the audience, without using the hard-boiled realism and with sense of humor.

His new show at Outlet Gallery first amazes the audience when they enter the gallery. Do not expect to see large installations or paintings or video work. Delier carried Outlet’s office to the entrance and changed the place where the office staff works.

In fact, by doing this, Delier tries to reflect the problems that working people deal with everyday. He starts with questioning the lives of people who work in large buildings. There are no borders between work life and social life. It is possible to work, to dine and do sports all in the same building. Carrying the Outlet Gallery office to the entrance reminds audiences how the capitalist system transforms the working and social lives of people.

However, Delier not only draws attention to the capitalist system and its deficiencies. What artist tries to reflect is the harsh environment of the working life or how to survive in it. Like his other works, once again Delier “presents” another detailed work.

Like all of his works, he emphasizes his work with documents. Delier searches for “qualifications or required skills” in the job applications and discovers some of the qualifications are particularly very popular, such as being presentable, can work in flexible working hours, easy to communicate, have the ability to analyze, be dynamic and ambitious, etc.

Delier removes the boundaries between working and social life. This is a kind of a questioning the system for Delier. The required skills, which job applications require are the qualifications that everyone or every artist should have. So, can we say that an artist is also a part of the corporate system? Where do artists stand in a corporate life? This may lead us to Adorno’s essay titled “Schema of Mass Culture.” In “Schema of Mass Culture,” Adorno says the commercial character of mass culture causes the difference between culture and practical life to disappear. Delier criticizes the situation by removing the boundaries and borders between the practical life and corporate life. So the system leads a no boundaries or no borders situation in people’s lives. In this scene, human beings look for a moment of independence. But this moment is lost in the process, writes Adorno. (Theodore Adorno, Culture Industry, “Schema of Mass Culture)

This approach can be analyzed in his other work titled “We Will Win.” 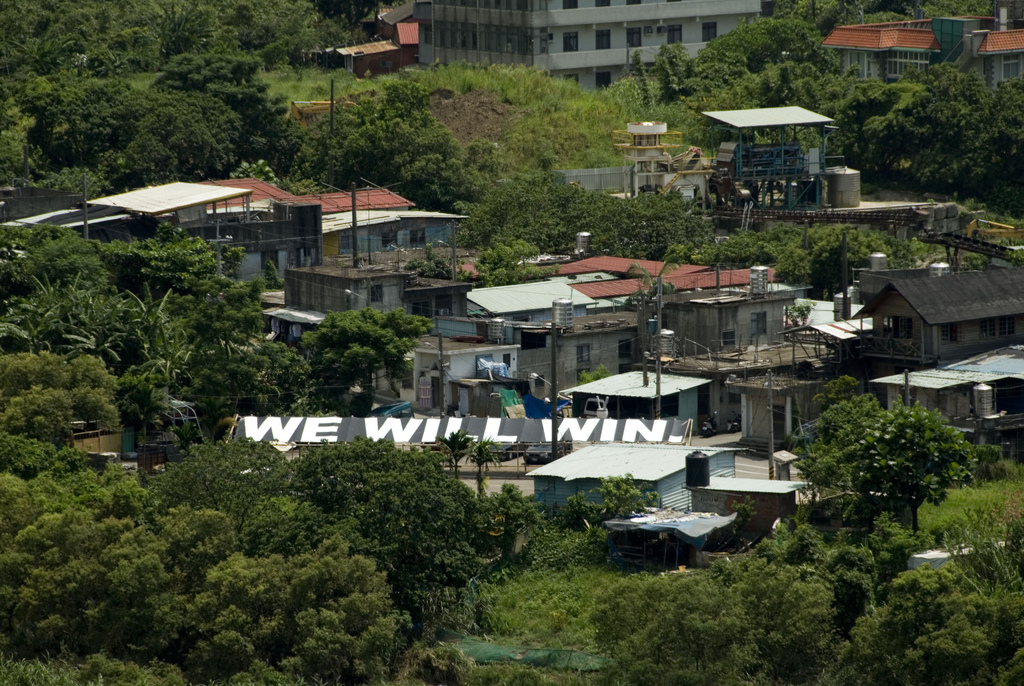 Delier first starts from an intervention that he held in 2008 titled “We Will Win.” However, he does not stop there, Delier makes the audiences face up to “criticizing and questioning the artwork.” Once again he does it very professionally by using a large survey.

His intervention “We Will Win” is a site-specific intervention among the Shijhou Tribe. His project stands at the center of controversial plans to dismantle housing on an area of land that has been flooded by typhoons. It has been proven that this site has been flooded three times in the past 30 years due to a simple defect of blocked gutters.

Delier gathered with the people from the village and prepared a large banner that had “We Will Win” written on it. He tries to arouse awareness to how society lives.

Later on at a 2010 biennale Delier expanded his project and he published a booklet on testing both “We Will Win” intervention and revealed the questions that face the culture industry.

Delier starts from a question: “Is it possible to provide critique at an art biennale?” He thinks that there is no simple “yes” or “no” answer to the question.

“On the contrary, to say yes or no – accepting the system unquestioningly or carrying romantic attitudes of escapist rejections – forms the very obstacle to being critical. Whereas criticism is only possible in an area where absolute judgment is delayed,” writes Delier in his text that appeared in We Will Win survey catalogue at Taipei biennale in 2010. (Translated by Michael Ziya Dikbaş, published by Taipei fine arts museum)

In the survey Delier asks questions such as, do you agree that art should be a critical power? What is the most important thing in an artwork?

With these questions Delier also emphasizes how an artist exists in society or haw he or she can exist in the society. In the book published by Taipei Fine Arts Museum, Delier writes that he believes an artist, as a distinct subject that we can validly call “an artist,” no longer exists. In this day and age, it is only within the art market that the artist subjects can survive – if you call it a life.”

Another important work of Delier might be the “Parkalynch” product that he by himself produced. As an artist, Delier not only creates art, he also produces products and works with research companies to evaluate how this product’s feedback returns to the market.

By doing this, Delier not only criticizes the system, he also draws attention to how things work in the system, because Delier is not an artist who screams like he is against something or against a thought or system. He prefers to show the audiences why he is against or in favor of using documents of paper, with research and with utilizing lots of facts and figures.

In his work titled “Parkalynch,” Delier’s product of the same name and is the debut product by his imaginary corporation called  “Tersyön,” is evaluated by a research company.

“Parkalynch” is clothing designed for protection against lynch attacks and it is resistant to stones, sticks, batons and punches. The project deals with the process of carrying out feasibility research at the imaginary corporation “Tersyön.”

His installation is composed of three zones. Two zones feature looping videos and the third one is a meeting-room like space that is separated by glass walls in which the data gathered through the research is presented. The audio can only be heard in this room through earphones.

One of the videos (Field) is compiled from the “in-depth interviews” which is a starting point of the market research.

The other one (Meeting) is realized in a “focus group” room with a participation of business professionals.

Delier succeeds to carry the perception of art to another level with his projects. The project says that the art is not a part of our current entertainment culture. It is something more. Delier questions the perception of art in the human mind and discovers a new dimension in it. He not only questions the art and the place of an artist in it, he also tells us he discovered something new in art and that’s why he names his show as “I slowly came to discover that it is more meaningful and subversive to engage in experimental investigations of art than create some self-contenting, easily commoditized anarchist gestures.”

After seeing the exhibition, understanding his “raison d’ être,” it becomes meaningful to understand what drives Delier to create these art projects.