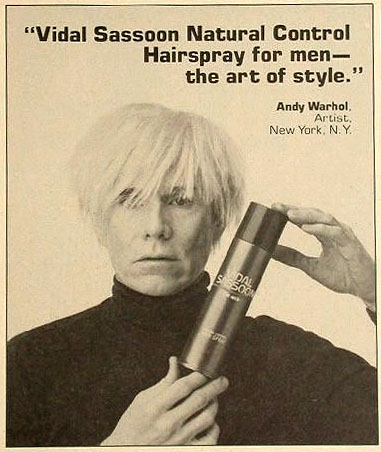 Today I went to the ‘Pop Life’ exhibition at the Tate Modern and was really impressed by it. It totally showed how artists like Andy Warhol bridged the gap between Fine Art and popular culture. I particularly enjoyed seeing all of Warhol’s ad campaigns he took part in, like his Vidal Sassoon (shown above), Absolute Vodka, and cassette tape adverts, which really made you realise how he made art into popular culture and himself into a celebrity. Also on show was The New York Post from 23rd of February 1987, the day after he died, which read ‘Life and times of a media genius, see pages 4, 5 & 7’, which I thought was pretty apt for the exhibition, that the artist was written about as a media genius rather than an artist! I also thought the re-creation of Keith Haring’s pop shop was really cool. It made the exhibition into a real experience. Haring really crossed the boundaries from fine art to popular culture by drawing his work on disused ad spaces around New York, and disregarding the usual channels of the gallery and museum to get his art out there. He started his pop shop in the 80’s selling his own designs on t-shirts and other commodities, using merchandising to get his art to the masses. Pop Life showed a video of Haring painting Grace Jones up for an appearance on MTV, but I found another video of him collaborating with Madonna, as he designed the backdrop for her hit ‘get into the groove’ (posted below). He’s pretty cool. I like the fact that art is so involved in everyday life now. The exhibition also showed the work of Damien Hirst, Tracey Emin, and Takashi Murakami, who has gone beyond Warhol’s model of factory produced art, and has employed several hundred assistants to design and fabricate his artworks, completely immersing his work within consumer society. He's even got a deal with Louis Vuitton! This exhibition was a really interesting look at art becoming part of popular culture.