Lost in Venice: The Venice Biennale 2013

Lost in Venice: A visit to the Encyclopaedic Palace: The 55th Venice Biennale

Said so often of the Venice Biennale, perhaps most notably by Bruce Nauman two years ago, it has achieved the status of a post-Sebaldian trope: You have to walk and preferably get lost to see the show. As many of the national pavilions and all of the collateral events of the biennale are so spread out across the city, beyond the walls of the Arsenale and the Giardini, visitors are obliged to approach them on foot, along and across labyrinthine passage-ways and canals, with the ever-present possibility, through enforced digressions, of encounters with unexpected delights, so that half the fun and half the point of the show is to get lost, though much of the fun element and all of the point is, admittedly, lost when the sought-after exhibit is never found (the Palazzo Peckham, for instance, somewhere off the end of the Via Garibaldi) or closed, either for the day through some quirk of scheduling or maladministration, or permanently (Ai Wei Wei, arguably one of the stars of the show, whose collateral event at the Church of St Antonin closed in mid September) if you were foolish enough to risk an early autumn visit, towards the end of the biennial, in order to avoid both the heat of summer and the swarming crowds of tourists decanted from their monstrous cruise liners.

In fact, the idea of loss might well be seen as the motif for this 55th edition of the first ever amongst a currently burgeoning number of biennials. The curator, Massimilioni Gioni, seems to have lost the plot in his over-arching concept of the Encyclopaedic Palace. Based on the design for a palace of the same name by the self-taught Italian-American artist Marino Auriti, in 1955, Gioni sets out to "house all worldly knowledge" and in the process has created less of an exhibition of contemporary art than a museum of curiosities (though, with some considerable irony, he manages to "lose" the character and spirit of the Arsenale by converting the first section of the Byzantine ropeway into the ubiquity of a white cube). Art is often secondary to invention and artifact and the whole tells us less than we might expect about the contemporary art world. He eschews the professional - "If we look upon contemporary art as simply a profession it becomes mere visual entertainment" - and gives undue prominence to non- and outsider artists, including Jung, and his Red Book, Rudolf Steiner and the occultist  Aleister Crowley, with his satanic Tarot Card designs. His selection of artists is scarcely contemporary, forty out of 140 are dead, leading one critic to describe the exhibition as in "necrological mode", which merely adds to Venice's reputation as part of the art business community, providing ratification for established artists rather than a forum for new art. Interviewed about his curatorial approach, Gioni expressed a desire to establish "a certain intolerance of politics", distancing himself even further from the notion that the biennial should present new works by current artists that reflect the contemporary world: so, no art, no artists, no politics!

Fortunately, the curated part of the show takes up only about half the Arsenale, the Central Pavilion alone in the Giardini and plays no part in the 47 Collateral events or the 88 National Pavilions. Free of the dead hand of central, curatorial authority, the national pavilions, seen by many as dinosaur relics of a bye-gone era, are in fact the repositories of a vibrant creativity that reconnects the biennale with a wider reality, yet are far from being the “cliched national caricatures” that Mark Wallinger identified in 2001. The French pavilion houses the German exhibition which, in turn, centres around the work of the Chinese dissident artist Ai Wei Wei, though Jeremy Deller, in the British pavilion, does rather buck the trend by incorporating an interactive tea room installation, serving real tea, in a room at the back. There is no provision for any kind of censorship by the organisers and most national pavilions are free of interference. Bahrein, a newcomer to the biennale, is funded by the ruling family yet has works by female artists that confront the contentious issue of the role of women in Islamic societies. 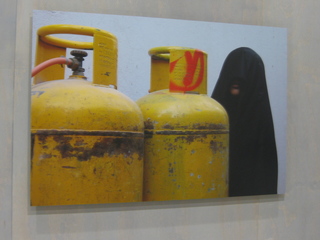 A Villager’s Day Out

As with many of the collateral events, on the issue of political relevance the pavilions seem closer to the vision of Paolo Baratta, president of the biennale, who commented in an interview for The Art Newspaper that “Art without history or politics becomes a game”.

Alfredo Jarr’s work at the Chile pavilion relates to both history and politics, focussing on existential loss in an installation “Venice, Venice”, in which a scale model of the Giardini rises from a tank of water (the waters of the lagoon or the waters of the globalised economy) before disappearing again beneath the surface, a literal reference to Venice in Peril as well as a metaphor for climate change. 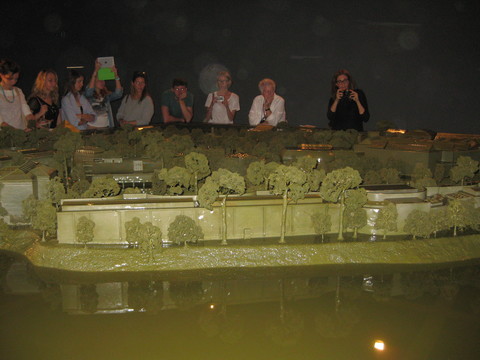 Similarly linked to the issue of the environment are the pavilions of newcomers Tuvalu and the Maldives, with the latter incorporating “The Ice Monolith”, by Stefano Cagol, a block of ice from the Alps placed in the water by the Arsenale on the opening day and gone by evening, the ultimate, ephemeral art work and, like the so-called “eternal ice” of the Arctic, an irreplaceable loss. Not a national pavilion but a collateral event, “The Garbage Patch State” by  Marina Cristina Finucci, is an installation of balloons and plastic bottle-tops that spills over the edge of the Grand Canal and references the five huge patches of mostly plastic rubbish, one the size of Texas, floating around the oceans of the world. Concentrated in the North Pacific and known as the Pacific Trash Vortex, they represent a growing environmental threat to marine life and ocean eco-systems.

Nor does the biennale ignore the recent global financial crisis. A number of the European pavilions concentrate on social and economic issues. “History Zero” by Stefanos Tsivopoulos in the Greek pavilion uses film to show the country’s current tragedy as an opportunity to build anew on the basis of an alternative economic model, with an archive manifesto exploring alternative currencies and exchange systems, from American Hobo Nickels to India’s anti-bribery Zero Currency. “ 25% - Catalonia at Venice” documents the lives of eight unemployed people from a wide social spectrum. Each was invited to comment on their individual circumstances which were then linked to their attitude to the arts based on their views of an object of emotional significance to them from their homes as well as a work selected from the national collection in the Barcelona Museum of Contemporary Art.

The most powerful of the Middle Eastern national pavilions was probably Lebanon’s - for Iraq, Egypt and Syria it was very much a matter of “make do and get by” as one critic put it. Akram Zaatari’s  mesmerising film “Letter to a Refusing Pilot” was a poignant indictment of Israel’s war on Lebanon in 1982 as well as a parable for peace. It tells of a rumour that an Israeli fighter pilot had refused to bomb a building that he recognised as a school in the small town of Saida. He dropped his bombs harmlessly in the sea. Later, another pilot returned to bomb and destroy the school but the memory of the story has persisted. 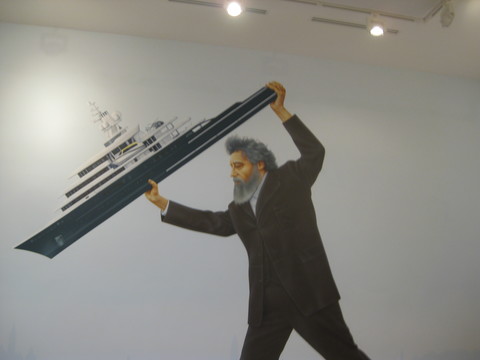 On a significantly lighter note, in the British pavilion, the image of William Morris, father of the Arts and Crafts movement, casting the yacht owned by the Russian billionaire, Roman Abramovich, into the waters of the canal was satisfying on so many levels as to be beyond reporting; whilst the Venezuela pavilion, the one nearest the exit and therefore either the unwitting victim of culture fatigue or the visitors’ last port of call, provided a fitting finale for the pure joie de vivre of its dazzling urban art and  its pulsating Latin music - so, really, what’s wrong with contemporary art as "simply a profession [and] mere visual entertainment”?