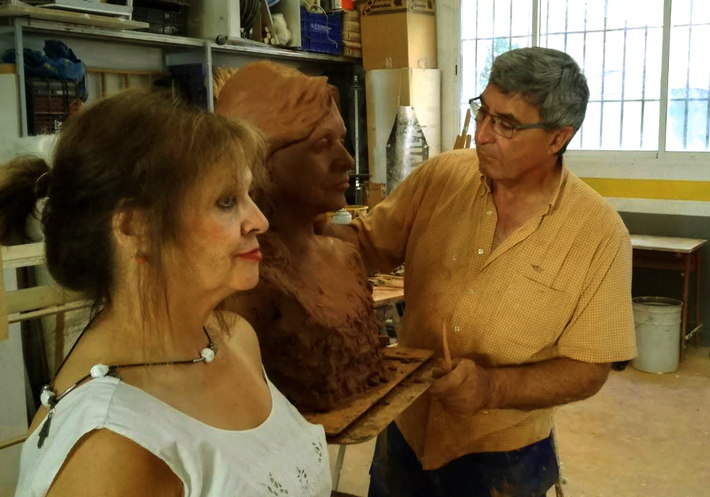 Julio Abad Saiz and the model 2019

Born in Cuenca in 1949, Julio Abad Saiz defines himself as a self-taught figurative sculptor who from an early age became interested in art in its most diverse forms. Already at a very young age he began to draw the characters of the movies he saw in the cinema. During adolescence, he began to excel in the subject of drawing while developing his skills in this discipline. However, he was fascinated to see how a sculptor molded the mud with his hands. It is at this time when he first comes into contact with the sculpture and discovers his ability to shape the volumes. When the painting is parked, Julio Abad Saiz makes his first sculpture at the Granero de Cuenca academy. After completing a mold-making course at the Royal Academy of Fine Arts of San Fernando in Madrid, he turns to the sculpture and continues to make numerous sculptures after more than thirty years of dedication.

Among all his sculptures, portraits constitute the most extensive part of his work. They are faces treated with realism, naturalness and serene expression that portray relatives, friends and numerous artists such as the Cuenca painters Víctor de la Vega, Óscar Pinar, Emilio Morales or Damián de Dios, the musician and watercolorist Alfonso Cabañas, the poet José Luis Lucas Aledón, the ceramist Tomás Bux or the Valencian painter Alejandro Cabeza. In addition to portraits, he has demonstrated great mastery in the modeling of the human body. His nudes reveal his admiration for classical sculpture, by masters such as Mariano Benlliure or Cuenca imagers such as Leonardo Martínez Bueno or Luis Marco Pérez.

Throughout these years, Julio Abad Saiz has participated in several collective exhibitions in Castilla-La Mancha: the traveling exhibition “Arte Manchuela” in the province of Cuenca and Albacete in 1995; the exhibition of the association Pro-mural painting of the church of San Juan Bautista de Alarcón, at the Carlos de Antwerp Foundation in Madrid in 1996; Almudí Room of Cuenca and Caja Rural de Toledo in 1996; “The artists, with Holy Week Cuenca” in Cuenca in 2000 or “Universal Heritage Art” in Cuenca in 2018. His work is distributed in private collections, as well as in different towns in the province of Cuenca or Albacete.