In the art scene resemblance kills

It is a widely known fact that contemporary art is open to all kinds of speculation. Currently Turkish art scene witnesses a peculiar incident in that viewers have noted a resemblance between Burçak Bingöl’s and Ai Wei Wei’s works.

Everything started when Ai Wei Wei created a surveillance camera and displayed it in London’s Lisson Gallery. The inspiration behind this work was the surveillance camera that Chinese authorities installed in 2009 to observe the traffic going in and out of his workshop. The work was titled “Surveillance Camera,” and is a commentary on the Big Brother state in which Ai Wei Wei lives.

The Lisson Gallery’s vast window was recording the gallery’s own CCTV camera outside and the schoolchildren in the playground across the road. 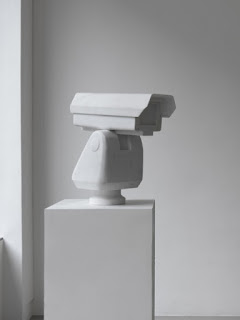 The camera made by Ai Wei Wei in China has drawn attention of Turkish audiences as they saw another surveillance camera made from ceramic (Ai Wei Wei’s was marble) by Burçak Bingöl, a Turkish contemporary sculpture artist. Bingöl created a surveillance camera using flower patterns and titled this work “F(ol)lower.” In doing so, she said she was inspired by the Beyoğlu neighborhood where she was living for about nine months. 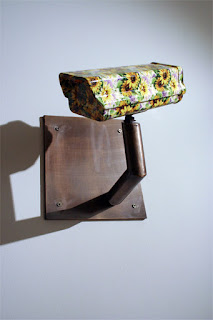 However, when the Turkish contemporary art audience discovered that the surveillance camera “idea” was also used by Ai Wei Wei and informed daily Radikal’s art critic Ayşegül Sönmez, who is also an artist, the “ideas” of the two artists were encountered on the same platform and then collapsed.
On the other hand, another work by Bingöl titled “Close Circuit,” which she also made from ceramic tubes, was the main attention of the reader, as Ayşegül Sönmez wrote in her column, the tubes also resemble a work that Ai Wei Wei made and exhibited before, under the title of “Field” for the 2010 ArtBasel exhibition. 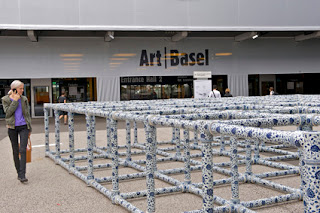 “Is this a new genre that we are witnessing?” wrote Sönmez in her column. “Should we think that a new category has been born, a category of versions?” said Sönmez, speaking to Hürriyet Daily News
“The resemblance between the pieces and works are discovered by the viewers, not by an art critic or a writer,” she said, adding that this is important because this time not an art critic but the viewers had a say in contemporary Turkish art.
Sönmez used the metaphor of “playing cops and robbers” to describe the event. “I used it just as a metaphor,” she said. 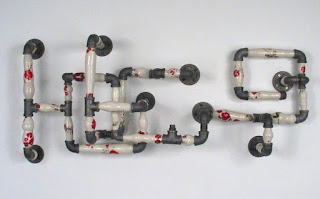 “This event should be evaluated in a broader sense. We should be interpreting this event. In fact the main thing is not the resemblance. The main thing is how original is the idea behind the work.”
Noting that she does not mean to say there is plagiarism in Bingöl’s work, Sönmez said an original work is still the most valuable piece and the question is, “Who thought of it first?”
However, on the other side, Bingöl’s approach to this incident is entirely different. In the “open letter” that Bingöl sent on June 16 via the Gallery Zilberman newsletter and addressed to Ayşegül Sönmez, she said it is very unfortunate and sad to read a piece under the title of “cops and robbers,” while it is also very disappointing that Sönmez questioned the originality of the work.
Bingöl also said: “The general soul of the article that you [Sönmez] have written is stuck in the magazinish and easy ‘here we got the plagiarism’ tone.”
In her solo exhibition titled Cabinet of Curiosities, which is still exhibiting at Gallery Zilberman, Bingöl’s main aim is to sum up what she has done and created so far in different parts of her life. The ceramic work titled “Close Circuit” was exhibited first in Eskişehir in 2004 and later on in New York in 2006 in different forms, said Bingöl in the open letter.
Answering the Hürriyet Daily News via e-mail from ArtBasel, Bingöl said: “At ArtBasel, we are witnessing lots of ideas repeating themselves.”
On the other hand, Bingöl said she had a chance to meet with a representative from the gallery that exhibited Ai Wei Wei’s surveillance camera. “Ai Wei Wei’s exhibition opened on the same day that my exhibition opened,” she said.

Not the first, nor the last

Incidents like this are not the first and will not be the last. In fact, finding inspiration in another artist’s work or not knowing what other artists have created before may have hard consequences for contemporary artists. 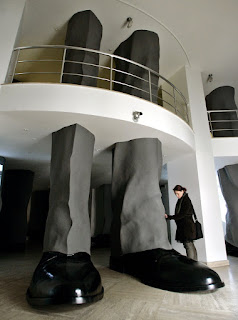 After this incident, in the interview that Block was giving to Ayşegül Sönmez, she said: “If I had seen Ilya Kabakov’s work, then I would say something to Hale Tenger about the resemblance of their two works.”
Another resemblance took place at the Contemporary Istanbul Fair. Artist Halil Altındere created a video using Yahşi Baraz, an acknowledged art expert and gallery owner in Turkey, under the title of “Portrait of a Dealer.” In the video, Baraz puts his head through a painting by Burhan Doğançay. 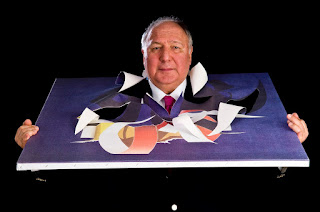 However, later on it was discovered that photographer Erwin Wurm had created the same work long ago using classic art expert Peter Wolf. Wurm created his work to highlight the relation between art and money in the art scene. In Wurm’s work, Wolf put his head through a Renaissance painting. 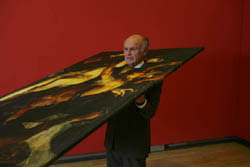 Erkmen, Friedl and the Giraffe 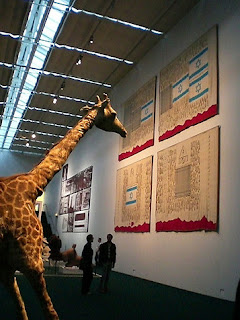 Ayse Erkmen and Berlin-based conceptual artist Peter Friedl had another incident that created a big impact in the international contemporary art scene.
Erkmen proposed to work with the Qalqilya Zoo in Palestine’s West Bank, particularly with the taxidermists there. What she was interested in was the transformation of the zoo into a natural history museum by freezing and saving life along with stories that are unfortunately or sadly funny. Brownie the Giraffe died as he fled the sound of gunfire, falling down and breaking his neck. Then 10 days later his pregnant partner Rudi had a miscarriage because of sorrow and Brownie and his unborn giraffe son were preserved and put on display together in a special exhibition space inside the zoo.
Later on Friedl used the same story. His piece is a stuffed giraffe from the Qalqiliyah Zooi also named “Brownie,” that was killed in an Israeli bombing raid during the second Palestinian Intifada in 2002.
Freidl has been garnering a huge amount of attention at Documenta 12, in Kassel Germany, for his artwork The Zoo Story.
Friedl was subject to a lawsuit when artist Ayse Erkmen alleged that The Zoo Story infringed on her copyrighted idea of borrowing the giraffe from the zoo, which she had attempted to do (but been denied) in 2004.