I Hate Those Flies of Beelzebub 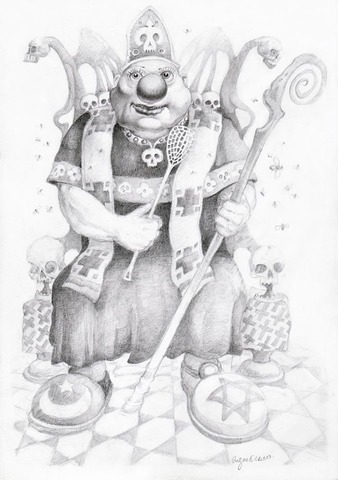 From the very beginning of the drawing to start to make its shape, I found out about some facts that attracted my attention and seamed to be of interest.

One of the friends of Satan, named Belzebool, was also known as Lord of the Flies. Please don't consider the one that you see on the drawing as the Lord of the Flies. It may be just a showman from our times, and he is just irritated by flies. Maybe there are too many flies in this world.

Some of them sting, some bite and some just stink.

There are ones that are harmless, just hanging around with flowers, nectarines and sweets...

But there are still a lot of those who like a good piece of meat, blood and all the other stuff that rots, remains and old grumblers.??? Those are the ones that let out millions of eggs, they do not stay in one particular place, as the wind moves them away from their original places.

Very often, especially crazy ones can get alive into your mouth or eye, but mostly they would try to escape.

They run away from those who move. Those who do not move, they have bigger problems, those are just eaten out by the flies.

In Hiroshima after the explosion of the atom bomb there were a lot of people all over, on the ground and on the debris, who were still alive, but who from the terrible heat produced by the explosion, had their skin absolutely burned off.

Those people were absolutely paralyzed by the shock of the scene.

They could not show to those who were close by there to assist them that they are still alive.

That is what the flies were good at using, they just covered all the tasty space and had a fist over the God Creation, a human.

Charles Darwin considered neither homo sapiens nor the monkey for the most ingenious invention on earth.

What happened was that after his daughter's death these were the worms that he started to investigate. That seems strange that he tried to calm his heart's pain, working on something that nowadays is already known as his biggest lifelong joy, making research on worms when his love was long ago buried. Sadly, but what can anybody want from the poor scientist, simple mortal. He was not heated on the fire. When knowing more about these insects he was surprised by their level of importance in the processes of functioning of the whole world. I don't know whether he studied also flies or just stopped at worms. We definitely know that the first stage of the fly is a worm.

The romantics would love a worm to transform into a clover, because it is beautiful and vegetarian after all, is it not?

But the reality is that instead the servant to Beelzebub is born, the Fly.

Talking about Beelzebub, in the 16th century, there was an inquisitor (just the one who judged and burned people, as you know, that was possible because of the general ignorance of people in those times), the inquisitor was named Binsfeld. He classified demons by the seven deadly sins. Beelzebub was associated with doubtfulness of the character or the demon of gluttony sin.

In his time, in 1801 some British occultist named Barrett, made his own classification of demons. There Beelzebol took a different place,  that was the place of The Prince of False Gods.

While we try to classify demons and each other into believers, wrong believers, nonbelievers, and prattle about living according to the laws of God, where you can't kill, usually only the ones that believe in the same God, at the same time flies have their party and show people make even more extravagant covers.

That is the harmony over the universe, where even the dollar bill declares "In God We Trust".