Francisco de Corcuera, The Impossible Existence of a Mathematician 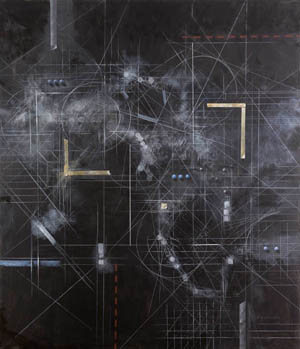 Oil, acrylic and pencil on canvas,

rosenfeld porcini presents The Impossible Existence of a Mathematician, the inaugural

The exhibition will show large scale works on canvas across both floors of the gallery space. It will present both a series of Corcuera’s black paintings alongside a series of lighter, more colour intense works. The materials used are a combination of oil-based mediums, acrylic and graphite on canvas. Born in Chile in 1944, Francisco de Corcuera has lived for many years outside his native land.

Immersed in the arts since childhood, he has always considered himself first and foremost a painter. Throughout the various decades, his works have retained a constant philosophical preoccupation – he is, by his own declaration, a conceptual artist yet equally importantly a painter.

Raised in a strong Catholic background, he has been haunted by the impossibility of living life by the rigid structures which organised western religions impose upon the believer. He has endlessly posed himself the question: can one live life by order and rules alone or will life itself inevitably get in the way? His paintings, notwithstanding their formal development, have conceptually always illustrated this dynamic quandary.

He begins the process of painting by drawing a complex grid of geometric lines, mathematical theorems and algebraic symbols. However, once this foundation is complete, the artist begins making marks with a far greater sense of freedom; areas of colour emerge as do strange forms which appear raised off the canvas like strips of coloured paper. Yet these are, in reality, skilfully painted illusions – a homage to the trompe d’oeil tradition of the eighteenth century.

“Since very early on, I have been fascinated by illusion, particularly the magic in art, in the transformative power of painting. The turning or changing of flat surfaces into an image of convincing reality was my main concern” - Francisco de Corcuera

As with all great art in whatever medium, the unravelling of a work’s narrative content (even true for abstract art like Corcuera’s) will always be open to interpretation. The critic Thomas Michael Gunther has also written about the artist’s work and found a very different way to read the paintings:

“Blueprints of time, architectonic models, cosmic patterns, universal formulae, the paintings of Francisco de Corcuera trace the possibilities of change. Conceived in the dark night, like the poems of Saint John on the Cross which inspire him, these canvases explore the manifestations of the dynamic principle that moves the world.” - Thomas Michael Gunther

Corcuera’s own words further articulate his vast ambition: “For the past three decades or so, I have been trying to chart, to measure, to embody the very nature of thinking. That is, not only the image itself but also the ontological "all in one". Neither object nor subject but rather "sobject".”

A 16th Century ancestor Rodrigo de Corcuera was an extremely well-known cartographer therefore the ideas of drawing lines and mapping out systems, real or imagined, have remained in Corcuera’s family lineage.

In the constant evolution of painting as a discipline and a medium, Corcuera’s work offers a distinctive voice. The lightly but densely constructed mesh of marks and delicate seductive colour draws the viewer into a world that allows them to enter into a profound dialogue. Each individual painting seduces us through its visual beauty and at the same time creating a tension in the opposing ideas which confront us in the lines of the canvas.