Elements of Recall by Gail Flanery

Brooklyn, NY - An indigo sea, a yellow plain, purple mountains and a salmon sky: the vivid colors and painterly contours of Gail Flanery's recent monotype prints may bring these landscape images to mind. However, this new body of work, Elements of Recall, comprises studies in abstraction, each piece derived from a thoughtfully conceived palette of bold, yet harmonious hues. Flanery, well known for her adept application of unabashedly beautiful colors, takes her work to a more complex emotional level with these pieces. The exhibit features four large monotypes, which display a generous use of handwork, not only in the print-making process, but also in Flanery's subtle addition of pastels. There are also several smaller prints including a group of deftly rendered bare tree trunks and branches, inspired by the discarded photos of a fellow artist. These monotype prints are informed by Flanery's longstanding habit of sketching from life, as evidenced by the strong, confident lines and understanding of structure inherent in these images. This is Flanery's second solo exhibition at the 440 Gallery. Elements of Recall will run from January 10th through February 17th with an opening reception on Thursday, January 10, 6:00-9:00 PM.

Flanery considers herself, first and foremost, a colorist. Color is Flanery's starting point. She typically will take an entire day to develop the palette of colors she will use for a set of prints. "The colors set the mood and lead the mark-making. Next, composition decisions are resolved," says Flanery. She uses her fingers, the heel of her hand, cardboard, brushes and rags to manipulate the inks on plexiglass plates. Then, after the paper has been run through the press and the inks have dried, she often adds pastels to the resultant image. Rubbing, blending and scraping the pastels into the printed surface, Flanery achieves nuanced effects, creating a sense of depth and distance through layers of transparent color. Flanery is constantly sketching, collecting images of views near her cabin in Montana as well as from photographs torn from magazines. While she does not use these as specific references, fragments of these images influence her composition and the atmosphere resulting in a sense of place, one that might be described as remembered rather than observed, in her one-of-a-kind prints.

Flanery is a graduate of The Cooper Union School of Art, where she was influenced by the eminent painter and colorist Wolf Kahn. Flanery has long practiced her craft in the studio of master platemaker and printer Kathy Caraccio in New York City. Her works are in dozens of corporate and private collections, as well as in the permanent collection of the Jane Vorhees Zimmerli Art Museum. Flanery has exhibited extensively over the last thirty-two years with several published reviews to her credit, including in The New York Times. 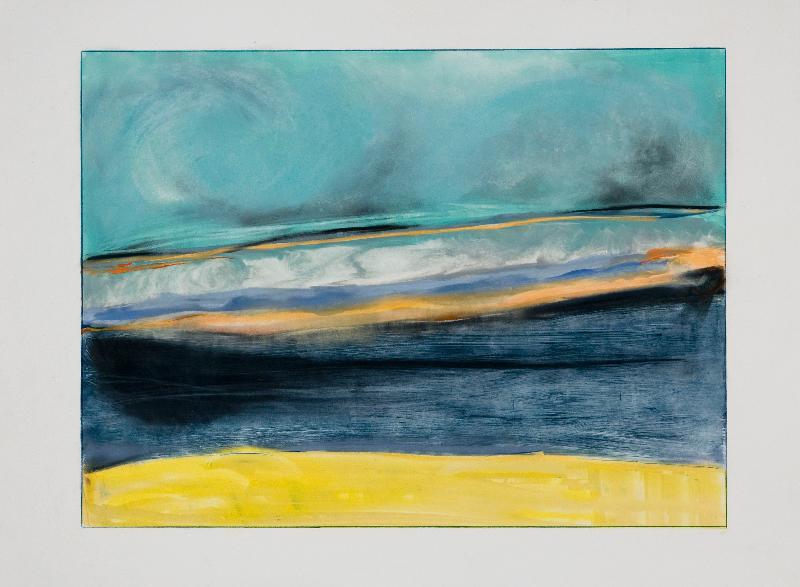