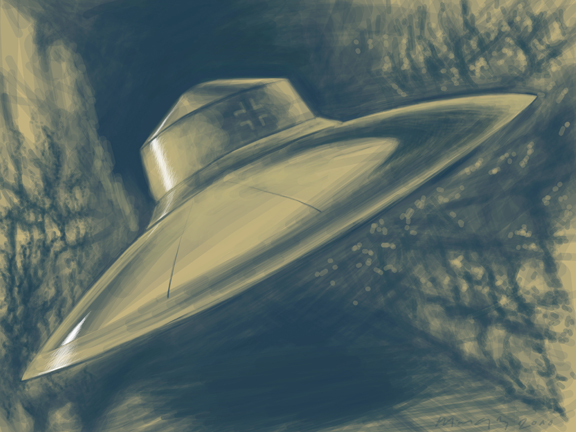 UP there with finding Elvis on the Moon, revelations of alleged weird Nazi secrets have long been the stuff of torrid tabloid headlines. "Hidden Nazi Gold Found at Last!", "How Hitler used Black Magic" and so on. But if the National Enquirer has yet to announce conclusive evidence for the existence of Nazi UFOs, it hasn't prevented serious investigations into whether Third Reich scientists were researching some pretty cutting-edge technology towards the end of the Second World War – like anti-gravity engines, for example.


Whether substantially true or not, the idea that there may have been Nazi UFOs flying around in 1945 has, inevitably, led to a mass of speculative theories and suitably bizarre images appearing on the
internet.

And it is this sheer bulk of "weird science" conspiracy material that has inspired the latest project by respected Nottingham painter Mik Godley.

Godley has just returned from the Edinburgh Festival where his exhibition, brazenly titled Nazi UFOs. is on show at the small TotalKunst gallery in Edinburgh city centre. It consists of over 40 images of Nazi flying saucers – many being artistically enhanced versions of images purporting to be real photographs of Third Reich saucers. All of the original images were sourced from the
internet. Some are clearly fake; others are more convincing.

Amazingly, all of Godley's own images were then produced on his 4GB iPod Touch using 59p artist apps such as Brushes and Paintbook, and then printed out for the exhibition. It's a testament to Godley's traditional skills as a painter that he was able to produce the images
on a small screen using only his fingers.

As you might expect, material about flying saucers has its vocal adherents.

"The most interesting visitors to the exhibition were the ones who were very interested in UFOs," says Godley, who teaches drawing in Chesterfield.

"One guy told me that he'd seen his first UFO in 1963. There was another old hippy who talked to me a lot about UFOs being from another dimension. He also said the world would end in 2012" (the film was right, then).

However, a surface reading of Godley's images as portrayals of weird science misses the greater themes at work.

The UFO art is the latest instalment in a longer running project titled Considering Silesia which attempts to deal with Godley's own Anglo-German identity and, to an extent, the issue of German war guilt.

Godley began the project seven years ago by tracking down material (again, on the internet) about Silesia, where his German mother was born.

This led to a series of sombre paintings and portraits and a wider investigation into how the internet itself has become the dominant, and unfiltered, medium of the world's information.

Fact, fiction, factoid, opinion, speculation: how can anyone know which is which and what to rely on? This was Godley's concern when he read about theories that the SS had engineered arcane technologies such as anti-gravity engines in the tunnels burrowed into the Silesian
Mountains by slave labourers.

But it's immaterial to the art as to whether Godley believes in Nazi UFOs or not.

"There are some valid questions that need to be answered," he says, carefully.

The next stage in Godley's journey into his German identity is a visit to the real Silesia.

See the exhibition video at: -

See the images on this album: -

Comment by Mik Godley on September 19, 2010 at 21:12
Hey Marek - it looks as though the job might have been partly done for me - my boss at college told me he'd been showing my iPod work to Apple - he's very keen to develop touch-screen work - so on Wednesday the man from Apple is coming to give me an iPad!

Apparently I've got to gem up on the iPad to deliver a project to the students next term - what fun!

No grant or US expo mentioned though - but who knows what might happen?

Comment by Marek Tobolewski on September 5, 2010 at 23:31
now when are sending your images to the apple development team
they've been marketing their iPad on the box again

time you made contact and them sending you an iPad to 'play' with
and a heathy grant for the expo in the states!!

Comment by Daniel Mc Keon on September 3, 2010 at 12:07
Mik congratulations on the Nazi UFO's project which I think is an amazing work and I am glad to see it is getting the attention and recognition it deserves.