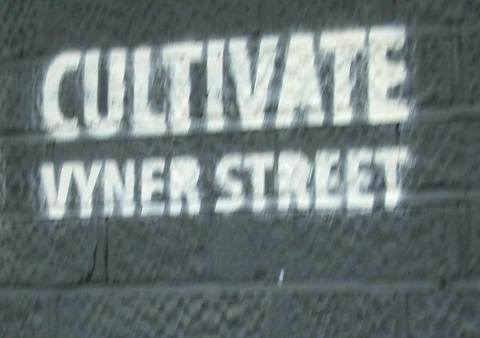 Well this running a gallery space in the middle of what is now, I guess, the East London art establishment, is proving to be very interesting indeed. One month in to the six month project now and we're having a very interesting time, Lots of positive reactions from artists, visitors, art viewers and such, and fair to say just a little touch of hostility from those engaged in the business of art around about us - bigger galleries who tell me there are set ways of doing things, those who seem to make thier living 'advising' artists from their Vyner Street offices and such. I don't know, if it was me on the street and a new gallery had opened and put on four really interesting shows in the first month or exisitance then I might just make te effort to cross the road and have a look and say hello? Let's not start off on a negative note though, so far we've had a very positive very interesting expereince and as we prepare for our fifth show opening and our second First Thursday event, we're feeling rather pleased with how it has all gone..

So yes, we got a little fed up with the way things were going in terms of having to crawl through financial hoops in order to show our work.  The outragious prices a big proportion of the decenty placed galleries seem to charge for hire or commission they take.  And so rather than just go on moaning about it, we gathered together everything we could and opened our own space right in the middle of it all and set out to try and do it a little more reasonably. Let's try and understand the reality of it all from the gallery people's point of view rather than just constantly complain about it all. Of course we have bills to pay, the landlord wants his rent payment at the start of each month, we have no funding, and we're certainly not rich kids. Trying to exist as artists in this city means we're on first name terms with bailifs and such. This is not a funded self-indulgence, we can't exist if we don't at least break even. We have to run this properly, this has to be a commericial venture

Been frantically good so far, we signed the paper work on a Wednesday afternoon, picked up the keys the next day, Thursday, the first Thursday of the month. We put the word out the nght before and put out a call for artists to come help us get a gallery open and a show sorted out and hung in 22 hours.  The call went out at 8pm on Wednesday, the keys were our at 3pm on Thursday, the sapce was cleared, the old beds removed and a quick brush on the walls and such, thankfully the space had already been a gallery, the walls were white enough for a last minute show, so at 3pm a dozen artists started to arrive with paintings and sculptures (we found a plinth on the dump at the end of Vyner Street, clearly the art gods were with us as we rushed to open for First Thursday and everything that that involves in Vyner Street.

First Thursday was a buzz, we felt good about the art we had up, we had a constant flow of people all night, things got rather eventfuloutside our front door what with the unexpected band playing in the van and all the naked men covered in honey and red food colouring... Exciting start

One month is, tired eyes, blistered feet, loads of debate, lots of postive art, the work of around 30 artists hung on the walls so far. A show called What Price Art? where the public have named their prices and we've not had any say, another show Called 22 Hours that documented the opening and hung the work of the artists from that frantic First Thursday in a more considered way. A show called Interim where Steven Rawling invited debate on the process of making/showing art as he worked in the space for ten days.

This coming weekend myself and a painter called Emma Harvery will work in the gallery while our work and the work of others hangs on the wall and people are invited to come in and view/chat/sit... Then we hang our next show on Wednesday and we open again for First Thursday with Red.


I intend to blog about the last month and continue the gallery blog as we go along, lots has been learnt, lots of questions have been thrown up, lots to blog about

Comment by SEAN WORRALL on September 29, 2011 at 15:15
We have Steven Rawlings closing his Interim project tonight, certainlt been an intersting ten days  -

Great topic and good luck to you during this process.