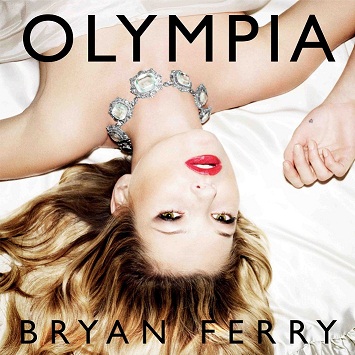 RuArts Gallery is proud to present Bryan Ferry’s selling exhibition “Olympia” that will take place from November 29 to December 5, 2011. Iconic top-model Kate Moss – Bryan Ferry’s current muse and source of inspiration – was an indisputable choice of cover girl for this album.

A quintessential icon of modern music and contemporary culture since his meteoric ascent to fame in 1972, with his groundbreaking art rock band Roxy Music, Bryan Ferry has conceived and art directed every visual aspect of the packaging, promotion and performance of his music.

Originally tutored in fine art by the legendary British pop artist Richard Hamilton, Ferry has throughout his career maintained his founding interest in art and visual culture. As one of the only musicians to be interviewed at length by the leading international journal of contemporary art, ‘Frieze’, Ferry has spoken of the very close relationship between his passion for fine art and his artistic ambitions as a singer, composer and performer.

The artwork for the eight Roxy Music studio albums, created between 1972 and 1983 and displayed in the current exhibition, comprises a sequence of finished images, studies and alternate versions that is as meticulously conceived and crafted as it has proved both innovative and controversial. Described by one critic, on its initial release, as “nothing less than a manifesto”, the artwork for ‘Roxy Music’ (1972) was seen as a bravura visual and conceptual continuation of the vertiginous and seductive music on the album. In a manner which knowingly and seamlessly merges American glamour and European intellectualism, mass culture and fine art, this achievement would be advanced and consolidated across all of the Roxy Music artwork, and further nuanced by the sparser, but no less elegant, portrait images of Bryan Ferry that adorned his solo releases – most famously ‘Another Time, Another Place’, shot by the acclaimed US photographer Eric Boman. Similarly, fashion designer Antony Price’s long standing collaboration with Ferry on the styling of both the Roxy Music and solo album artwork would be a major factor in their overall temper and impact.

In his interview for ‘Frieze’, Ferry likened his approach as an artist to that of Duke Ellington – selecting a cast of creative collaborators in much the same way that a painter would select his palette. This has remained true throughout Ferry’s career as both a musician and visual artist, and achieved particular prowess for his most recent release as a solo artist in 2010, the sumptuous and timelessly modern, ‘Olympia’.

Seen here are a series of 10 exhibition prints of the leading modern muse, Kate Moss, created for ‘Olympia’ by Bryan Ferry in collaboration with Adam Whitehead, a former assistant photographer to Mario Testino, as well as with Moss herself. In a brilliant reprise of the famous painting by Edouard Manet of the same title, ‘Olympia’ (1863 – 1865), Kate Moss - appearing for the first time on an album cover - poses in a series of images as Ferry’s modern day muse. Each of these ten photographs shares a title with a song on the album.

The manner in which Ferry has conceived and styled what he has described as the ‘idealized fans’ on the covers of his records, is both an exercise in pure pop values – creating an exciting, desirable and glamorous commodity, super-charged with aspirational values – and an elegant, mass cultural example of conceptual art. In this, there is a perfect twinning of Ferry’s artistic vision and the choice of Kate Moss – the most successful and iconic model of her generation – to create the cover art for ‘Olympia’. Moss herself is a iconic figure who blurs the boundaries between ‘high’ and ‘low’ culture, having inspired both the mass markets of fashion and beauty products, and contemporary artists such as Damien Hirst, Marc Quinn, Michael Clark and Adam McEwen. Like Ferry himself, she has come to represent both an idea and an attitude – her image is used as code to transmit a state of mind.

"I approached the record with the same intensity as the early Roxy Music albums,” says Ferry, “and I wanted the artwork to represent this. One of the inspirations for the cover was the 19th century painting 'Olympia' by Edouard Manet - a kind of early pin-up picture, and in a sense a forerunner of some 20th Century Pop Art, which I feel strongly connected to. I wanted a cover girl for this record who could convey the glamorous notoriety of the original 'Olympia' painting, and the obvious choice was Kate Moss. Kate has long been the 'femme fatale' of our age, as controversial as she is beautiful, and the most glamorous female icon since Marilyn Monroe. I was still finishing my album at the time of the photo-shoot, so everything happened at the last minute (which is often the way with 'rock 'n roll). The shoot took place at Sunbeam Studios in London, and the designer Gideon Ponte built a fantastic set with the finest linen and the perfect bed...Shoes and dresses were flown-in from Paris, jewelry escorted by security guards, flowers everywhere, a supporting cast of thousands... and everyone involved worked really hard to get the right shot, especially our photographer Adam Whitehead. Kate, needless to say, was incredible - the ultimate professional, and the star that everyone dreams of working with.”