Anita Kunz is a artist and illustrator who has lived in London, New York and Toronto, and has been widelypublished in Germany, Japan, Sweden, Norway, Canada, South Africa, Holland, Portugal, France and England.Her works are in the permanent collections at the Library of Congress, the Canadian Archives in Ottawa, the Musée Militaire de France in Paris, the Museum of Contemporary Art in Rome, and a number of her Time Magazine cover paintings are in the permanent collection at the National Portrait Gallery in Washington DC. Kunz’s critically acclaimed paintings and sculptures have appeared in galleries world wide, including the Norman Rockwell Museum in Massachusetts and across the pond at the Teatrio Cultural Association in Rome Italy.She  is managed by Gallery House, Toronto Canada 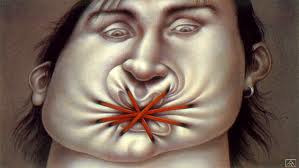 A: I’ve been making art all my life. For me it’s second nature, just another way of communicating. I was brought up to be a polite little girl and never to make waves. But somehow it seemed acceptable to be vocal, violent and controversial with my work, so that’s where all my emotions went.

Q: Who are your top three inspirations, art or otherwise?

A: I suppose travel would be a big one…seeing how other people live and how similar we all actually are. Secondly would be the study of human nature. I find the human condition endlessly fascinating. And education. I’ve tried to remain a student my whole life. I attend the TED conference every year, which is an incredible source of information for me.

Q: What is your biggest challenge personally as it pertains to making your work?

A: It’s a personal thing I suppose. I’m my own worst critic so I’m continually questioning whether or not the work is good enough.

Q: What is the significance of animals, religion and women in your work, why do you find yourself drawn to them and why are they a reoccurring theme in your work?

A: Well the gender area is self evident I think. We live in a society where the playing field is still not a level one. So that’s definitely a recurring theme. And because we share so much genetic material with other species, I think there’s endless room for visual musings. I’m not religious but most people in the world are. So religious iconography and symbolism are good ways to describe ideas and to communicate them quickly.

Q: How has your art contributed to society? Do you think it's important that art gives something to society?

A: I don’t think that’s for me to say. I hope that I will have contributed to society more than I’ve taken when it’s all said and done. I do think that society is improved by art, perhaps only if art is seen as somewhat of a mirror.

Q: What causes artistic blocks? What do you do to solve them?

A: I think repetition causes blocks. I think any creative people suffer them occasionally. I try to do something a bit different and hope they go away!

Q: In the past two decades who do you believe has made the biggest impact in the art world, artist, collector, philanthropist or otherwise?

A: The internet! It’s democratized everything! It has had as much of a profound effect on us as the industrial revolution did. Q: How important do you think it is for artists to know about art history, and why?

A: I do think it’s important if only to understand context, which can be everything!

Q: What's your process? How do you go about starting a piece and then deciding when it’s finished?

A: I start with a quick pencil sketch but don’t become too obsessed with it…that allows me to be a bit more spontaneous with the finished painting. I work layer over layer with watercolours and acrylics. It takes time, and I know it’s finished when I just can’t look at it any more!!

Q: What would you like to be remembered for?