and our everyday encounters-

ID, Please., at the New Galley London, is an exhibition in which three Korean artists, living in the city, explore issues of identity in relation to their nomadic status, and the everyday encounters we as viewers experience. A surprising and enlightening event reveals how closely we engage in definitions of identity on a daily basis, when two visitors turned up with their international driving licences – believing that ID was actually necessary to enter the exhibition. This suggests that there exists in the mind of art visitors a feeling that one needs to be able to prove oneself, to justify identity – and presence - in the gallery space.

ID, Please. is also curated by two Koreans living in London: Dani D. Kim and Yovi J. Song. They told me they perceive their ‘foreign-ness’ constantly, through daily experience. South Korea - historically referred to as part of the ‘Far East’ – is associated with extreme distance, and has very different cultural conventions to the UK, though it has recently mingled rapidly with international culture. The curators wanted to explore identity artistically, as they are forced to do personally in their everyday life.

This questioning of identity is explored through the latest works of three contemporary Korean artists who work with various approaches. Although this exhibition is divided by three main concepts - national identity (Jieun Kim), virtual identity (HaYoung Kim) and sexual identity (Jung Yun Roh), this is not an attempt to confine the issue to any fixed concept. Rather, the artworks are posited as a moving frame in which identity’s confusion, and its ‘inbetween-ness’, can be conveyed. 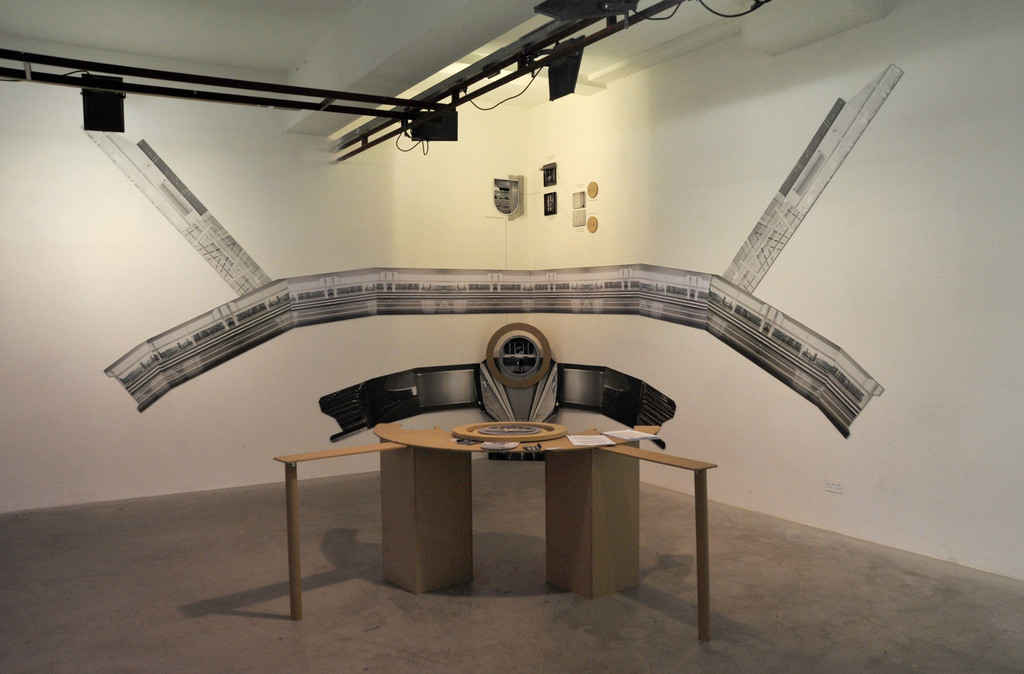 Entering Jieun Kim’s spectacular installation of airport mapping, requires encountering layers of meaning. She took photographs at seven different airports during her travels, but for the installation assembled these images into one, non-existent, airport. This fictional airport stands for a space of non-place and non-national specificity, but simultaneously requires the proof of identity (a passport) for entry. The installation, from a distance, looks spectacular. It requires the viewer to take their journey step by step, paying attention to details in which the artist’s quiet but smart wit is hidden in the photographic images. This parallels the structured experience of travelling through an airport. Jieun Kim’s mind-map captures the moment when identity is accepted or denied – through the trope of the immigration office. Inside the office is a liminal space, separated from after: where those who have been successfully admitted have their personal identity confirmed and are permitted to attempt assimilation; and from before: where those who are denied entry have their personal identity constrained by social and political rules.

An interesting feature of Jieun Kim’s work is the spatial relationship between the two artworks, in the gallery space: NON- (photographic installation variable, 2012) and Constant Movement-A Unit (audio based 4mins 28 sec., 2011), an installation of photograph and sound. A small speaker is hidden on a column behind the viewer, which plays the sound of a train on a track. This surprises the viewer as they wander around the room, and relaxes the predominance of the visual. In this in-between space of visual and aural, the viewer’s cognitive ability to read the work in an immediate visual way is disrupted. Viewing is made physical, and multi-sensory; the viewer’s experience in that moment cannot easily be articulated in a narrative mode, and their sense of clear identity is blurred. 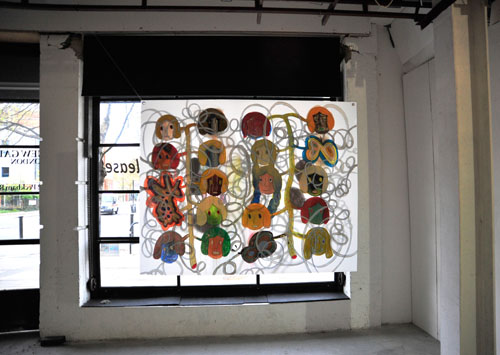 Lively colours and wriggling figures of microscopic cell organisms in Ha Young Kim’s work are typical of the artist’s work’s vitality. She uses biological imagery in contrast to the iconography of cyberspace in order to disturb the mechanical forces (modern science and the internet) that construct contemporary human identity.

The face has long been the clearest marker of our identity. When we encounter a human face, we are naturally tempted to ‘read’ the person’s ‘faciality’ as representative of their character. The ambiguous facial expressions on the faces dangling from the stem cells in Stem Girls, (acrylic on drafting films, 2012) offer no hint of their character and thus make the viewer encounter purely the visual image itself. The juxtaposition of the two disparate images of the body - the scientific stem cell and the imaginative, stylised Manga face - reflects the unstable, ephemeral quality of the drafting film of which they are made.

While internet and post-internet theory tends towards locating the screen as the point of intermediation between cyberspace and the subject’s position at the computer/device, little is said about the face as a point between one conceptual space and the other. In Kim’s work it is precisely the face that is given attention as representative of an element of the non-virtual that is not included into the virtual identity. The lack of facial expression in this negotiation of identity is one that is understood, in this work, as to the detriment of its previous status as the rarified site identification: the face here is represented as ‘numb’, representative of a unused and neglected human element to virtual interaction. Kim tells of her misidentification with her own face after spending too much time online, the sense of being ‘brain-dead’ expressed by the part of the body which had once done most expressive work. Kim gives us a portrait of contemporary society as numb-faced, in which our existence is a fragmented one, not human, not machine and not cyborg, if the cyborg has traditionally been theorised as a harmonious singular entity.  If the face can unlock a wealth of pre-existing personality and individual identity, then the stem cells – associated with self-renewal and transformation – might be seen to represent the potential to develop new identity, in any form.

In HaYoung Kim’s other latest work, In Cyberspace Everybody Has Peanuts, 2012, she navigates the issue of identity in cyberspace. The striking, expressive quality of her biological images disrupts the mechanical, machine-like features of cyber identity. The artist suggests that cyberspace is a space in which, instead of passively accepting identity, we actively create new identities, and in the space of her painting cells seem to compete for dominance. The artist paints from memory, pulling images seen on television or the internet from a bank of memories. The images in the work therefore have no direct reference, and exist between the real and the imaginary. This fantasy space of reference without indexical or clear relation to the thing’s real identity mirrors the virtual space in which similarly there exists no one to one relation between the virtual identity and the real: the virtual identity we create in cyberspace is like reality, but not actually real.

The cells also appear to move and extend beyond the picture plane, yet the material on which she paints is employed to emphasise flatness – it resembles a computer’s monitor. A conflict exists therefore between the flatness of the screen-like surface and the animated image of the living organism, which means the artwork oscillates between being touchable and untouchable. This paradox reminds us of our experience in cyberspace, in which we feel the identities we create to be both virtually real, and yet intangible in reality. Overall, the sensational force of these paintings – striking in colour and movement – directly affects the viewer in contact with them. They disrupt our habitual expectations about viewing, and our identity as viewers, because they make the viewer an active participant in the space the artist sets up. 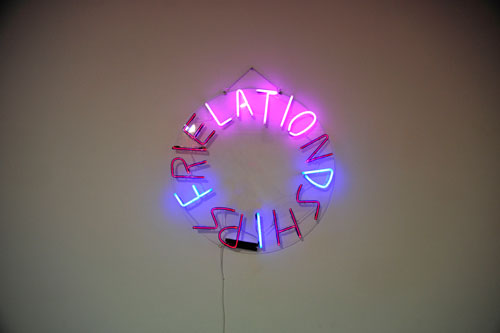 Jung Yun Roh’s conceptual work deals with the arbitrary delineation of sexuality, and its inherent ambiguity. Her work explores, visualises and questions the very process of creating identity. Departing from her familiar field as a painter, this experimental attempt at installation gives her work a freshness, and the instability of the medium reflects the transience of her artwork’s theme. The artist’s interest in this subject derived from her personal experience. In liberal London she is questioned about her sexual orientation, something she never experienced in South Korea, where heterosexuality is almost always the expected norm. She started questioning the ambiguous, unfixed relational boundaries between poles of sexuality in various societies. The poetic murmuring and scribbling of questions in I am A… (video, 2011) reflects Roh’s process of challenging to it. The viewer thus encounters a transitional moment in which we have to navigate the ambiguous state of sexuality ‘in ourselves’.

Also she questions the identities we create with others in the neon work FRIELAITIONDSHIPS, (2012) a compound word of ‘friendship’ and ‘relationship’. This humorous juxtaposition of these two words must chime with many viewers’ experience – that there is often little outline between being ‘friends’ and ‘lovers’ with another person. The pleasurable neon colour of letter itself has ephemeral, unstable materiality that effectively represents the concept of her work.

In Is A Tomato A Fruit or A vegetable? (5 drawing books, 2011), Roh challenges the identity of the humble tomato. The idea derived from her experience that in London the tomato is categorised as a fruit, while it is considered a vegetable in her country, South Korea. She writes contradictory statements: ‘A tomato is a fruit or a vegetable’ and ‘A tomato is a fruit and a vegetable’, and ends finally with the questions, ‘So, is a tomato really a fruit or a vegetable?’. She prompts us to consider the things we eat every day, and exactly what we consume. This trivial question about the identity of ‘our food’ challenges the easy categorisation of ordinary objects that become part of our bodies (ourselves) on a daily basis.