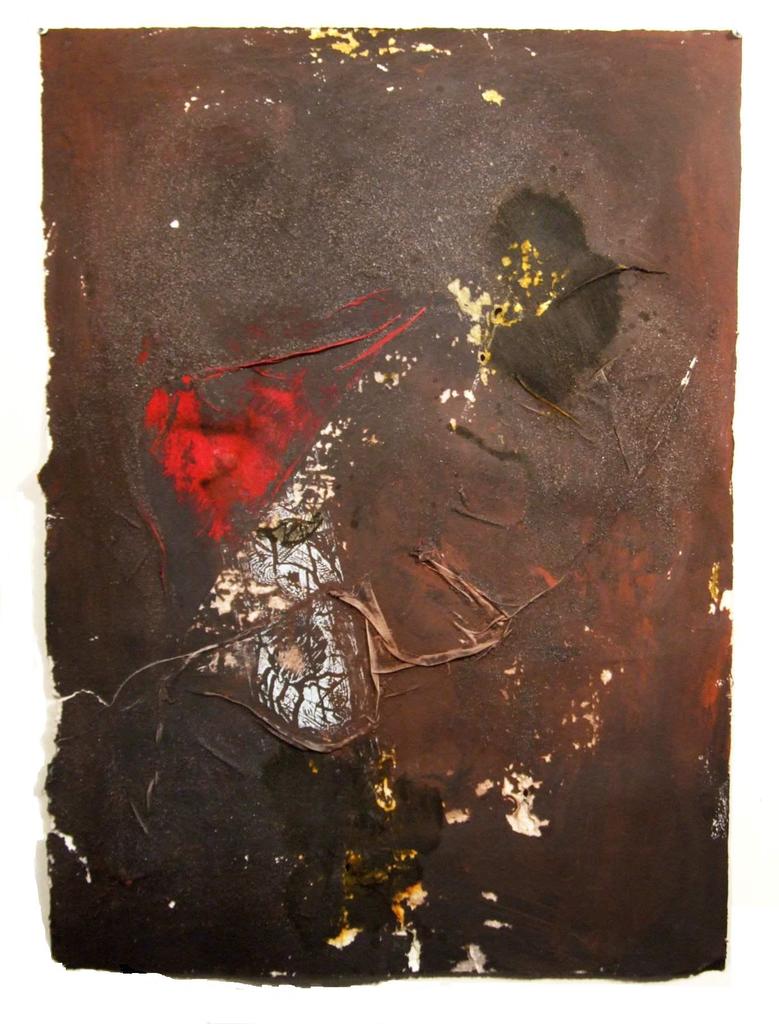 Puisano - Dialogue, 2013, mixed media on paper, 22x30.5 inches
Thabiso Phokompe
Tracing Home
April 18th – May 25th, 2013
Skoto Gallery is pleased to present Tracing Home, an exhibition of recent mixed media work by the South African-born artist Thabiso Phokompe who lives and work in Brooklyn, New York. This is his first solo show at the gallery. The artist will be present at the reception on Thursday, April 18th, 6-8pm.
Thabiso Phokompe is an artist currently creating work that reflects his life as a contemporary African artist living in New York City. Drawing on continual themes of bringing polar opposites together, his recent works comment on the experience of living in the African Diaspora.
His early works focused on the spiritual influence in African daily life. However, living under apartheid South Africa conditioned the ways of being in the world. It was during this early period that Phokompe frequently portrayed the black body as a site of injustice, echoing the concerns of people living in the townships. After the collapse of apartheid, Phokompe’s imagery shifted towards abstraction influenced by prehistoric rock painting. He was inspired by the power invested in the mark making process, which was also endowed with magical powers. This exploration led to his interest in abstraction, incorporating both natural and artificial materials.
Working between paintings and sculptures, Phokompe incorporates natural fibers, wood and soil as materials that metaphorically connect him to his ancestral home in Africa. These materials are combined with industrial substances such as: oxides, color pigment or cement, plastic sacks, nails, bottle caps, staples and acrylic paints. They confuse, compliment and conflate the complex narrative associated with the experience of crossing borders both physical and spiritual. His paintings are built with highly textured surfaces and dark colors resembling both the mud walls used in traditional African building, and painting techniques found throughout South African caves. In making these references, Phokompe seeks not only to validate the contributions of African culture to present-day society, but also to reclaim the cultural heritage of South Africa. For Phokompe, the process of recording and translating everyday experience through such mark making, is a spiritual act through which to study the past and envision the future.
Phokompe trained as an artist at Fuba (Federated Union of Black Artists) in Johannesburg during the 1980s, where he worked alongside established artists such as Kay Hassan, Tony Nkosi and Dumisani Mabaso. He subsequently studied at the Johannesburg Art Foundation in the late 1990s, where he first became interested in abstraction. He was involved in projects, such as a Thupelo Art Workshop, which brought together artists from around the world. This opportunity afforded local black artists an occasion to experiment with new materials and ideas. During this time, Phokompe’s increasingly sought to incorporate his concepts of African symbolism and spirituality into a new language that offers a vision of contemporary Africa today. He is a widely exhibited artist whose work is in several private and public collections at home and abroad. He is also included in the exhibition Earth Matters: Land as Material and Metaphor in the Arts of Africa, April 22, 2013-January 5, 2014 at the National Museum of African Art, Smithsonian Institution, Washington DC.
Tumelo Mosaka
March 2013
Princeton, New Jersey
SKOTO GALLERY 529 West 20th Street, 5FL.
New York, NY 10011 212-352 8058
info@skotogallery.com   www.skotogallery.com