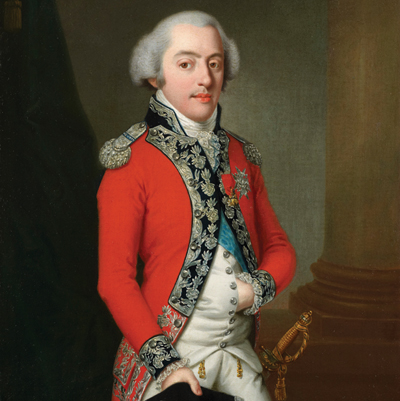 KASPAR BENEDIKT BECKENKAMP (German 1747 – 1828) Portrait of Louis, Comte de Provence, later King Louis XVIII of France and Portrait of Charles,
Comte d’Artois, later King Charles X of France, Oils on Canvas (Exhibitor: Nicholas Bagshawe)"
VISITORS to the 2013 Chelsea Antiques Fair, which takes place from Wednesday, March 13
through to Sunday, March 17 at Chelsea Old Town Hall on the Kings Road will see several
changes to the fair that was established in 1950.
The Fair is extremely pleased to be supporting two charities – Parkinson’s UK and Hearing Dogs
for Deaf People and Faith Clark – daughter of Lady Wright, one of the founders of Hearing Dogs
will open the Antiques Fair at 2pm on March 13.
Fiona Eddings, of Hearing Dogs for Deaf People, commented: “As a non-government funded
organisation, Hearing Dogs for Deaf People relies on the support of the public and fundraising
events like these to ensure more partnerships between deaf people and hearing dogs are created.
We are delighted to be a chosen charity and hope it will be a great success.”
Fair Organiser, Caroline Penman, said: “The Chelsea Antiques Fair is the ideal destination for all
those looking for that perfect painting, piece of furniture or beautiful decorative vase for their
house, making it also a wonderful resource for interior designers. It's the perfect place to go, if
you want to add to an already existing collection or even to start collecting as you will get the
chance to talk to lots of different dealers who will share some of their expertise with you. Never
has there been a better time to buy antiques, while prices are so tempting in the current climate.
Regular visitors to the fair will see several changes including a new stand plan, which incorporates
a diamond-shaped central space – making the fair feel a lot more open and light. They have also
recruited the services of Events Organiser & Antique Dealer Alasdair Brown to “dress” the fair and
create atmospheric lighting and wonderful floral arrangements. In addition, there will be new
catering with freshly prepared food and a bar.
The fair which comprises 37 exhibitors includes several new faces such as Hickmet Fine Arts
from Portobello Road, Eastdale Antiques from Shropshire – who specialise in Silver as well as
Mark Stacey’s ‘Vintiques’ from Brighton.
Highlights of the fair will include the glistening jewels of T Robert of Norfolk; fascinating works of
art and jewels from Shapiro & Co from Grays Antiques Market and some of the finest designer
costume jewellery from Monika.
19th – 21st Paintings will be offered by Nicholas Bagshawe of St James’s as well as Baron Fine
Art of Chester; Paul Mayhew and Saunders Fine Art of Solihull. Silver will be represented by
Paul Bennett of George Street, London and S & A Marsh of Surrey.
Furniture includes the stylish Art Deco pieces from Jeroen Markies of Sussex; Oak Furniture of
Peter Bunting of Matlock, Derbyshire; 17th – 19th century furniture by Midwinter Antiques of
Shropshire. George Wakelin of Wakelin & Linfield of Billingshurst, West Sussex will be offering
Fine English and Continental furniture carvings and accessories dating from 1690 to 1900.
Violet’s Antiques of Swansea will be displaying a myriad of objects such as treen and smaller
items. Rugs will be represented by Pars Rug Gallery of Hampshire,
Among the wonderful array of ceramics and glass will be Richard Hoppe of Devon, who is noted
for his scent bottles; M&D Moir, who specialise in Art Nouveau and Art Deco glass and
Christopher Sheppherd of Kensington Church Street will be offering Ancient and Antique Glass,
as will Brian Watson Antique Glass of Norfolk. Jupiter Antiques of Brighton will be bringing
Fine 18th/19th century British and Continental Porcelain and Sue Norman of Chelsea, who will be
offering her distinctive blue and white pieces. Caroline Stoddart-Scott of London will bring
English decorative 19th century porcelain & pottery and Roger de Ville of Staffordshire, will be
offering 18th and 19th century British Pottery. Event Details:
Chelsea Old Town Hall, King's Road, London SW3 5EE
Open Wednesday 2-8pm, Thurs-Sat 11am-6pm, Sunday 11am-5pm
Admission: £5
Details & E-Tickets: www.penman-fairs.co.uk. T: 01825 744074
For more information, images, special ticket offers or to interview Caroline Penman or any dealers
exhibiting, please contact us by emailing antiques@exclamationpr.co.uk
or call Silke Lohmann (07932 618754) or Rachel Aked (07790 732448).
• Hearing Dogs for Deaf People trains hearing dogs to alert deaf people to important sounds and
danger signals, providing independence, confidence and companionship. Deafness is more than
hearing loss - hearing dogs also help to relieve the stress, isolation and loneliness that deafness can
often bring. With hearing loss in the UK on the increase and almost 10 million people in the UK deaf
or have hearing loss, this number is set to grow as our population ages. For more details, please
visit www.hearingdogs.org.uk
• About Parkinson’s - Every hour, someone in the UK is told they have Parkinson's. It affects 127,000
people in the UK - which is around one in 500 of the population. One in 20 people are under 40
when they are diagnosed. Parkinson's is a degenerative neurological condition, for which there
currently is no cure. The main symptoms of the condition are tremor, slowness of movement and
rigidity. Parkinson's UK is the UK's leading charity supporting those with the condition. Its mission is
to find a cure and improve life for everyone affected by Parkinson's through cutting edge research,
information, support and campaigning. For advice, information and support, visit
www.parkinsons.org.uk or call the free, confidential helpline on 0808 800 0303.