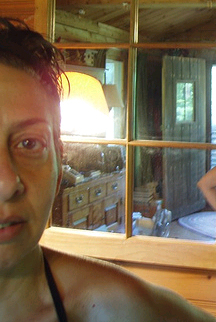 If you're an artist, what kind of art do you make?
Conceptual, Painting

Scenes of the apocalypse and disasters both natural and man-made could now be considered New York-based artist Joy Garnett's signature subjects, yet they retain their capacity to frighten. In her latest works, which once again incongruously deploy sumptuously applied paint to render open-source images culled from the Internet, the artist depicts vistas from around the world taken at ostensibly the same moment. Although they verge on abstraction, the canvases provoke memories by drawing on the lingua franca of documentary news photographs. Garnett's talent is for simultaneously imbuing these sublime landscapes with a hushed vastness that nearly nullifies their perilous circumstances.

The smog-filled serenity of the sun rising over a densely packed city and undulating horizon in Morning in China, 2007, is suffused with anticipation. Here Garnett's loose, impressionistic brushwork and colorful palette underscore the pace of China's rapid transformations, whether positive or negative--increasing population, burgeoning economic force, looming environmental concerns. This sense of bated breath gives way to trepidation in the twilight ambience of Harbor (2), 2008, in which a blaze of red paint seems to stretch from the land out into the water, signaling danger in an otherwise romantic seaside landscape reminiscent of Karen Kilimnik?s paintings. Though Garnett's new work may seem like a departure from her more recent themes of "strange weather" and global warming, perhaps these landscapes should be considered through another definition of weather--as an inquiry into how long we can withstand our current conditions. Right now, they seem like a forecast of things to come.

Joy Garnett's exhibition consists of four large paintings: an urban vista in early morning, an explosion caught at midday, a seascape at dusk and a burning structure at night. Although these scenes look like they could be representing imaginary places, they are in fact based on news photos from the Internet. By charging her source material with Munch-like painterly intensity, the artist transforms impersonal images that ordinarily warrant a passing glance into scenes that rivet the eye.

The results throw into sharp relief the vast differences in "speed" between painting and photography: Between the time it takes to snap a picture and create a canvas, and the degree of contemplation required for looking at art as opposed to perusing pictures on the Web.

In Noon, a rainbow of colors explodes from some unnamed site, and indeed whatever events led to the violence in this image could have taken place almost anywhere at any time. Similarly, Night uses a simple palette of red, black and white to depict the smoldering aftermath of 9/11, but despite Garnett's evocation of glowing flames and structural remnants, one wouldn't necessarily know that this is the World Trade Center. In her hands, a pervasively familiar yet traumatic event becomes strangely anonymous.

Reducing complex events to fleeting impressions can run the risk of trivializing them. Yet by memorializing images like these, which have been the focus of global media attention, Garnett makes them symbolic -- and gives them a history outside of current events.

Joy Garnett gets painterly with photographs culled from the Internet.

Sarah Trigg said…
thanks ;)
and Munch-like and that the scenes appear to be happening at the same moment--very true observations of your work i thought. congrats on your reviews---you rock!

David Vanorbeek said…
thank you for the add Joy
deev

Pall Thayer said…
Hi Joy, I'm mentioning your ArtForum review in a presentation I'm giving this Saturday at Pixelache in Helsinki. It's a presentation about software art. Go figure.

Daniel Milton said…
Hi, thanks for the invitation!

COMMERCE Gallery said…
Hi Joy,
Thanks for the request.
How's Chelsea treating you?
We were there for a few days in Dec.
Nasty weather but great galleries.
Levine's and Shaiman's are a couple of favorites.
I don't believe we went as far north as Winkleman.

Pedro Reis said…
Thanks for adding me, Joy! I loved your work.
Congratulations!