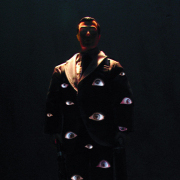 If you're an artist, what kind of art do you make?
Photography, Video

I am...
The non-place is the limbo, for photographers who do not fall within the current fashion, which does not partake of genres, landscape, portrait, nude, journalism. I think not being, I'm not working as photographer with reality. Maybe just be the geek of the action figures ... but that, I think you have to judge you.

About my artwork
It is clear self-interest, the human figure, the body expression is a constant in my work and that repeats on people and puppets.
The interest in being (Dasein), so human, social and spiritual man.
Spaces, of obvious drama and theater that give film another dimension of life and giving expression to the puppets in terms of lighting.
Objects and elements help to create several "sets" of surrealism own which generate several possible readings.

Centre of the artworld:
my studio

Michael Bowdidge said…
I'm enjoying your work very much. You have made a universe all of your own and I really like coming to visit it.

Luke Gilliam said…
Hi there . Thanks for the friends ad. You have some strong intellectual work. Please stay in touch! Best from L ::==)

Pennie Steel said…
Thank you for the addition Caytano I am very very interested in your work.
Cheers
Pennie