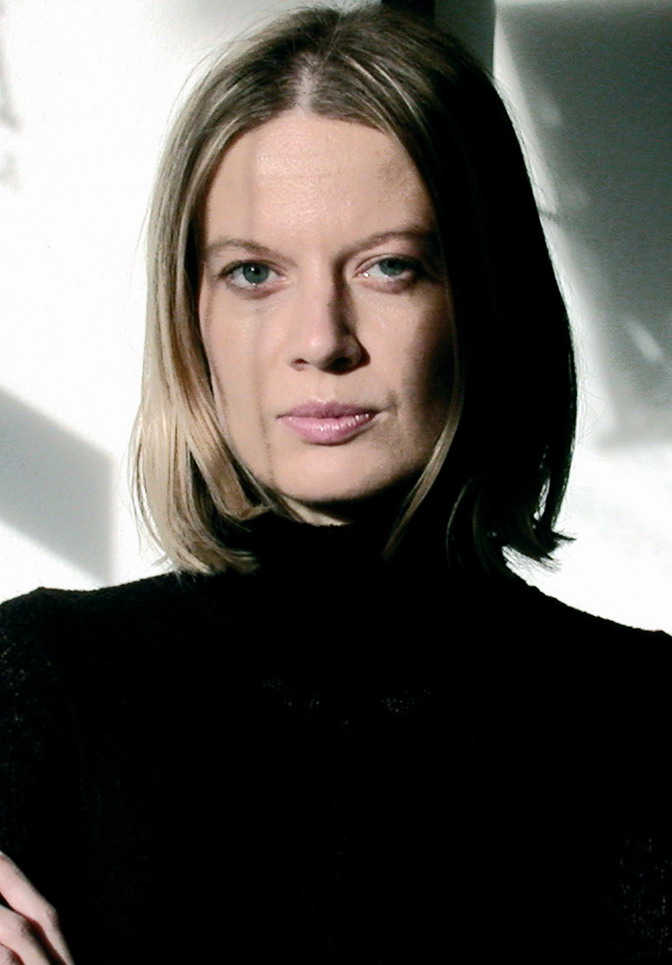 Cinemaniac 2008: Babette Mangolte / Ana Husman / Dora Katanic
curated by: Branka Bencic / Anke kempkes
MMC Luka / Pula Film Festival
Istarska 30. Pula, Croatia
20. 7 - 10. 8.
Cinemaniac is a sidebar program of the Pula Film Festival since 2002. The exhibition presents innovations and ideas concerning the presentation of works of film and video in the gallery context, where the infrastructure of the film festival provides a contextual and organizational platform as well as collaborative model. The exhibition works as an active context that enables the presentation of works of art. It is a meeting place that integrates social, cultural, technological, media, and aesthetic aspects, a meeting point for art, artists, institutions, and the audience. It investigates the relationship between film and visual arts by presenting recent Croatian and international production, as well as anthological videos, experimental films and multimedia installations.
Cinemaniac 2008 is presenting the works of Babette Mangolte at the Aneks Gallery and two emerging Croatian artists at the MMC Luka Gallery – Ana Hušman and Dora Katanić, by works that question certain relationships towards social norms and culture codes, as well as inclination to film references. One Song a Day Takes Mischief Away painting cycle by Dora Katanić parts from the famous Croatian film, a part of popular culture and film heritage. Ana Hušman’s installation includes some of the props used during the shooting of the film Lunch and creates an atmosphere of a bourgeois saloon. The use of humour and criticism for the interpretation of etiquette in the film ironizes rules for good manners.
Babette Mangolte was born and raised in France. As a cinematographer, director and photographer, she has been present in the contemporary art, film, dance, theatre and performance scene since the 1970s. In the course of her move to New York City Mangolte started directing films based on experimental narrative in her first features What Maisie Knew (1975), The Camera: Je, La Camera: I (1977) and short film (NOW) that will be screened at the gallery. From the beginning of her practice on, Babette Mangolte did groundbreaking camera work in her collaborations with film director Chantal Akerman and performance artist Yvonne Rainer. Her film work has been presented in numerous international film festivals and museum’s film programs, e.g. at the Whitney Museum of American Art. Her films are in the collections of The Museum of Modern Art, Centre Pompidou. A new film installation of the artist recently premiered at the Berlin Biennial 5.The Babette Mangolte presentation as part of the cinemania[c] exhibition organized within the 55th Pula Film Festival is the first presentation of the works of this artist in Croatia. The exhibition includes her early films and photographs from the mid-1970s in which she explores the relationship between photography and film, as well as space, film language and subjectivity construction.
Artists will be present at the opening. The exhibition is organized in cooperation with Anke Kempkes/ Broadway 1602, New York. 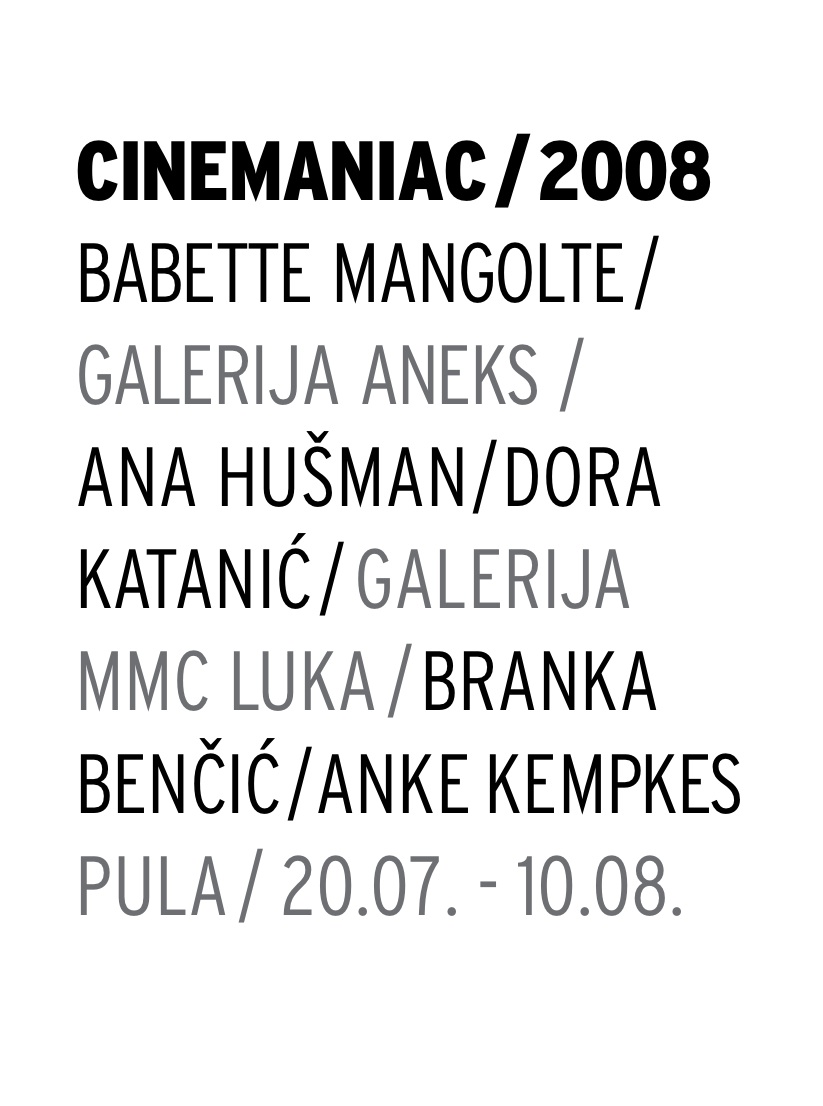 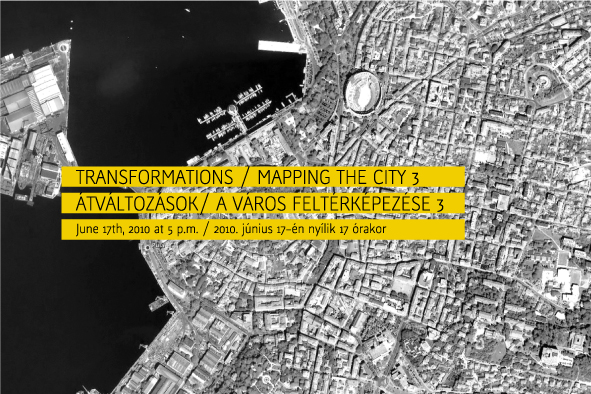 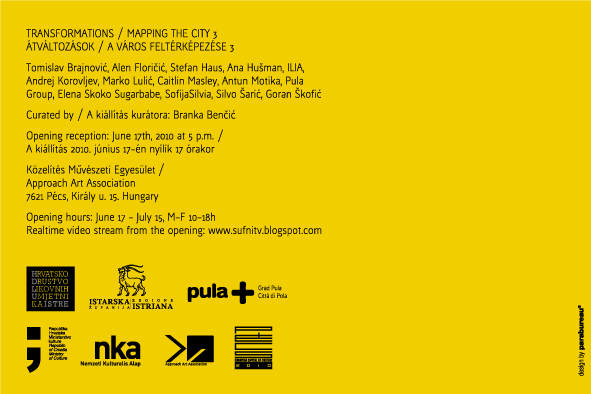 TRANSFORMATIONS (Mapping the city) _ a group exhibition that deals with ways contemporary artists reflect on different aspects of the concept and the experience of the city _ urban
matrix and human lives. Cities are in constant phisical and social change,…

Constructed by means of language and representation, identities are not a… Continue

Mik's Front Room said…
Hello Branka - good to see you are still busy - you have a new exhibition - excellent!

I'm fine - also busy, but having fun too.

I'll have a look at your new blog.

I hope you are well - are you still in Zagreb? My friend Paul Matosic was there for a project recently - we drank Croatian brandy the other day - I'd love to return to Zagreb one day :)

Yann Le Crouhennec said…
Pula was anice place to be

Risque d'attente is an exhibition conceived around the concept of the wait, a particular dimension of time, suspended between a real present and an indeterminate future event. In the history of literature and philosophy, as well as in theater and art, the wait has always fascinated for its projective feature as an indefinite time. Sant'Agostino conceived it as a “distensio animae”, and thinkers/philosphers such as Martin Heiddegger, Simone Weil, or Roland Barthes in Lover’s discourse; novelists such as Samuel Beckett, T. S. Eliot, Eugenio Montale or Dino Buzzati, related the wait to the dimension of the conscience. Also, according to Deleuze in Image - Time, the presentation of a dream represents a way of visualising the time which, through changing its physical states – becomes an almost liquid time, hovers between the past and the present, oscillates between waking and sleeping. This is the illusion that is made possible in the first place by moving images and the apparatus of their reproduction. As a condition of tension, the wait leads the subject into a mood in which the suspension is main feeling. During the wait the loss of ''centre'' appears as an optical, moral, symbolic or physical, material loss, that is manifested in expressing uncertainty, insecurity, de-centered subjectivity, alienation of modern individual, his moral atrophy, questioning collective identities or shifting social positions, as a consequence of the crisis of representation. Risque d'attente gathers international artists which are dealing with the time of waiting and exhibiting works that create a visual and narrative suspension.

Mik Godley said…
Mmmm, nice website - it looks to be a good festival!

Mik Godley said…
Hello Branka,
It looks like you have been busy - do you have any video clips from your film festival you could post on ArtReview to show people?
Cheers, Mik
PS. I'll look at the link