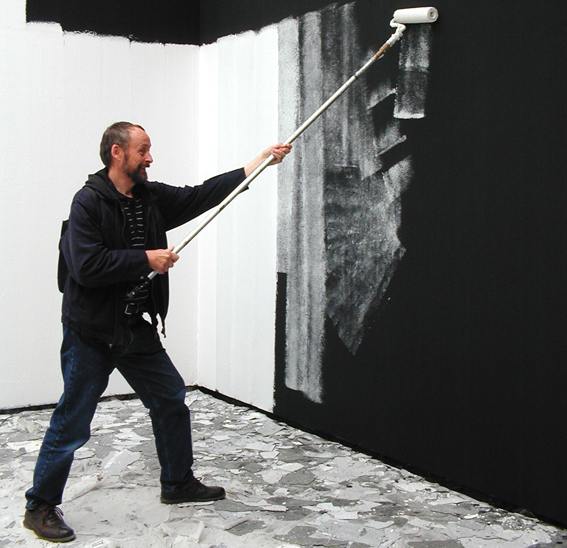 NO MEASURE NO LIMIT installations&sculpture&drawings

Program / Degree
-if an idea at first is not absurd, there is nothing to it. A. Einstein

If you're an artist, what kind of art do you make?
Conceptual, Digital, Drawing, Installation, Painting, Photography, Printmaking, Sculpture, Video

ART CRITIC TROND BORGEN WROTE AN ESSAY that you can read here:

"-What I cannot create
I do not understand."
Richard Feynman

ART DOESN'T KNOW IT IS ART

- Originally the ego includes everything, later it detaches from itself the external world. The ego-feeling we are aware of now is thus only a shrunken vestige of a far more extensive feeling - a feeling which embraced the universe and expressed an inseparable connection of the ego with the external world. (Sigmund Freud)

"The least important thing about an artwork,
is to know who actually made it."
Miltos Manetas

Certainly, you have to be an artist in order to make art.

But art itself doesn't know it is art, and the artist doesn't need to believe he is making art.

In fact, most of the time the artist works without other purpose than the pure pleasure of putting things together and see if it functions.

IT IS ALWAYS THE END OF ART
Ad Reinhardt

NORWEGIAN BIENNIAL OF DRAWINGS, 8.MAY 2010, MOSS
THE JUNE EXHIBIT AT KUNSTNERFORBUNDET, 10.JUNE 2010, OSLO

19.03.2009 - 03.05.2009
Kjell Varvin (born 1939) creates both drawings and paintings, but is best known for his sculptures and installations. This exhibition focuses on a large selection of sculptures made of welded steel and produced over the last fifteen years. Together with the sculptures, a number of drawings on veneer will be on show and the exhibition thereby comprises the largest presentation of Varvin's work so far.

Kjell Varvin's oeuvre has its roots in Minimalism and the artist himself emphasises how much artists such as Donald Judd, Brice Marden and Sol Lewitt have influenced him (Varvin also later worked as Lewitt's assistant). However, Varvin uses a method that has more in common with improvisation and playfulness than with stringent planning and perfection. He allows random chance, spontaneous ideas and accidents to be a part of his works, which he prefers to call "proposals" rather than "statements". This process results in drawings and sculptures that have retained elements of imperfection and therefore also their human quality.

At first sight, the sculptures may resemble classical, modernist works, but since their titles and other components refer to observations of everyday objects (as, for example, fire escapes in New York, a pinball machine or a dining table), they appear on closer examination as up-to-date works with a referential diversity that reminds us first and foremost of far younger, postmodernist artists. The exhibition has a fresh and topical quality, though consisting of works by an artist who made his debut in 1964.

Throughout his career, Kjell Varvin has exhibited extensively both in Norway and abroad. In recent years, he has participated at major exhibitions such as the Sculpture Biennial at the Vigeland Museum and the Drawing Biennial at the Artists' House in Oslo and also at joint exhibitions such as "Geometry as Image" at the Robert Miller Gallery in New York and "Go back to Start" and 0047 (all held in 2008). Varvin's last solo exhibition in Oslo was held at the Tegnerforbundet (Association of Drawers and Illustrators) in 2007.

For further information, please contact Erik Steen or Nina Paus on telephone 22 55 09 54, or visit our website on www. eriksteen.no

Duchamp said that works of art are full of secrets that are shared between artists. If you look at architecture or listen to music, there is much hidden stuff that most lay people cannot appreciate. Small details that give flavour and transmit energy and information to the adepts. The gothic cathedrals are full of mathematical science and masonic messages, and so were the paintings at that time filled with symbolic elements in forms and colours that gave the work a special direction and significance. All art through all ages contains hidden messages to the spectators; you only have to learn the language.

Rossello Damiano said…
INVITATION: http://rossellodamiano.ning.com/
A TRUE INTERNATIONAL SOCIAL-NETWORK RESERVED TO ARTISTS AND TO PROFESSIONAL OF CONTEMPORANY VISUAL ART- THE NETWORKAS ALMOST 10000 MEMBERS REGISTRED FROM ALL THE WORLD

YOU CAN PUBLISH EVENTS POSTS,VIDEOS AND WRITE PUBLIC OR PRIVATE MESSAGES TO OTHER MEMBERS


Visit A MEETING PLACE FOR ARTISTS AND GALLERIES

when you have a minute, have a look to "trivial events"and let me know what you think,
take care

Christopher Gulick said…
Escher and Kandinski would have been proud.

Sean Matthews said…
I am very interested in your use of space as well as the relationships between the objects. I was wondering what your work would look like in the round, but after seeing your many works, I realized the corner was as important of an element as the other objects. Great work.