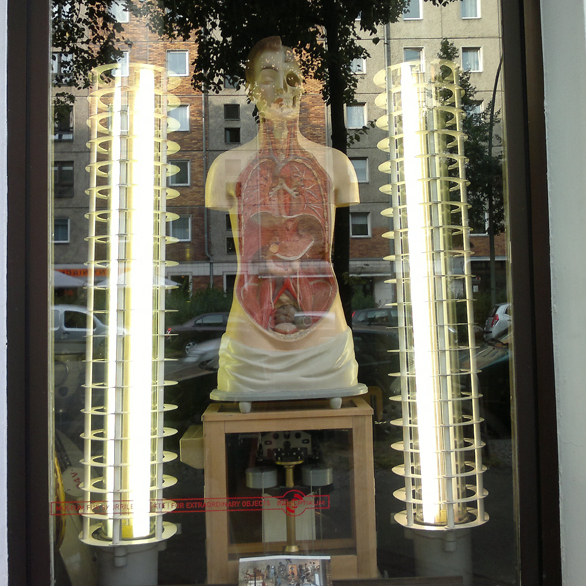 If you're an artist, what kind of art do you make?
Digital, Drawing, Event, Film, Installation, Painting, Photography, Printmaking, Sculpture, Video

I am...
Imagine you´re driving full speed against a wall only to find out that you have just crushed into a some kind of hyper nothingness, waking up in a dystopic scape of shades, in a place in which life has long been obliterated. Well, welcome to the psychic spin of Joas Sebastian Nebe´s "Philosophical Cartoons".
(Rebecca Schoensee, art historian, "Crushing Shadows", Humanize Magazine issue 8, 2010)

CV:
Nebe, who holds degrees in psychology and literature, is a self taught artist, born in Hamburg
but now located in Berlin. The different shades he conjures up haven’t gone unnoticed in the art
world, and seem to be on the rise. Paintings of his, touching on the topic of ritual sacrifice are
part of the Joop van den Ende Collection in Hamburg and “Philosophical Cartoons” is part of
the Collection of DIAF ( = Deutsches Institut für Animationsfilm). Important exhibitis include
Intrude Art and Life at the Museum of Modern Art in Shanghai in 2008, where Santiago
Capriccio, a short epilogue to the Philosophical Cartoon cycle, playing upon the “4th
Dimension” Video was chosen to be one out of 100 non-Chinese artists to be displayed on
public video screens in Shanghai. In the same year, the film was shown at the Edinburgh Art
Festival. The film "Climate Change Cartoons"was part of the exhibition "Letters from the Sky" which accopagned the Durban UN conference on Climate Change 2011 in South Africa and "Machine Fair"- a film about the mechanical site of a metropolis- has been shown at Museum of Modern Art, Moscow as part of "Now&After" screening in 2012.

The project´s idea is base on the encyclopedia, knowledge pool of the 18th century put together in a multi volume book project. The encyclopedia aimes making world´s phenomena understandable and put them into a larger context beyond religious explanations, which usually had been the first and only world interpretations in the middle ages provided by the catholic church. By this encyclopedia is the first try in modern time shaping the world.

In our time knowledge is provided by sciencists and changes everyday. Today it would be impossible to bring together the different concepts in order to understand the world from a unique position. Nevertheless the encyclopedia is still a distinct concept, which more than in the old days presents an utopia to us.

ENCYCLOPEDIC CARTOONS provides for each letter of the alphabet a more or less abstract word. Loosely connected to the word is a single film running from a few seconds to 4 minutes. There are 26 films, for every letter one film.

This are the words, representing the aphabet.

About my artwork
REBECCA SCHÖNSEE, ARTHISTORIAN, ABOUT THE WORK:
Imagine you´re driving full speed against a wall only to find out that you have just crushed into a some kind of hyper nothingness, waking up in a dystopic scape of shades, in a place in which life has long been obliterated. Well, welcome to the psychic spin of Joas Sebastian Nebe´s "Philosophical Cartoons".
(Rebecca Schoensee, art historian, "Crushing Shadows", Humanize Magazine issue 8, 2010)

Urban Candy is about the abyss of female/male interaction in metropolitan areas. Metropolitan areas dominate the contemporary life style of the majority of mankind, because biggest part of mankind lives in metropolites and urban life is dominating main communication formats, e.g. film and video. Metropolitan life coines expectations in a special way. Urban Candy investigates the clichés and reality of urban gender by using fiction, experimental and dance film format, assisted by experience and emerging artists like Alison Williams, Oliver Essigmann and Peter Kastner and assisted scientifically by Rebecca Schoensee. 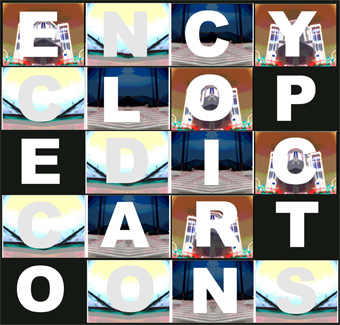 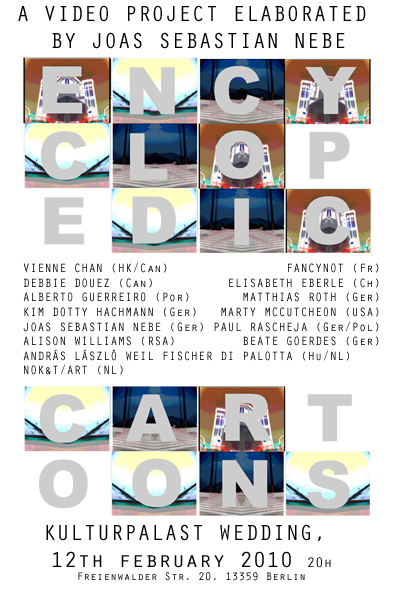 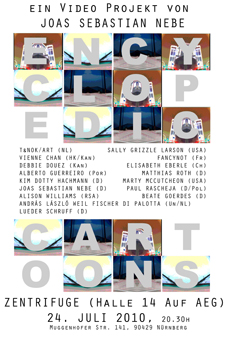 
The Vitruvian Woman
A video project elaborated and curated by Michael Chang.

The Vitruvian Woman is a multimedia sculpture created by 34 artists from around the world. Inspired by Leonardo da Vinci’s sketch; The Vitruvian Man, which idealises the classic proportions of the human body, in his case the male body, The Vetruvian Woman sets out to trace the multidimensionality of womanhood in a flow of five three-minute video sequences reflecting the nine bodily regions: the head, heart, stomach, sexual organ, right arm, left arm, left leg, right leg and feet.
This poetry of dismemberment screened on nine monitors draws on diverse chapters of female identity, from scenes of domestic life to the sensibilities of lingerie and lust. Allegories of the flesh and a male beaten to pulp add to the shaky image of female empowerment as it alternately pins its hope on Buddhist mantra and surrenders to the flux of collective consciousness.
(Kim Wyon)

From 15th to 22nd December 2009 “Vitruvian Woman” is shown at VIDEO DIA LOGHI 9th Edition at the space of Velan Centro d’Arte Contemporanea of Torino.

You can visit the survey online: www.videodialoghi.org

A group of creative authors from the most varied geographical and cultural ground outfitted with the infinite possibility of video art express the complex strength that identifies us as human beings: the emotions.

Provided by the exquisite extensive video collection of the Human Emotion Project, founded and directed by the South African artist Alison Williams, a roll of forty works selected by the Portuguese commissioner of the HEP group will compose an eclectic audiovisual program to be held at the José Malhoa Museum from 20 to 25th October, with a special gathering in the evening of 22nd of October of 2009.

The evening session of 22nd October will be lighten by the accredited Art Professor and Filmmaker Fernando Galrito as guest speaker and also by the inclusion in the screening program of student works from of the High School of Arts and Design of Caldas da Rainha (ESAD.CR) that this way are associated to the event.

The presentation evening hosted by the José Malhoa Museum of the Museums and Conservation Institute (MJM-IMC.IP), in partnership with the Human Emotion Project (HEP) and the High School of Arts and Design of Caldas da Rainha (IPL-ESAD.CR) will take place at 21h00h and will be extended up to the 24h00.

During the entire schedule of the Human Emotions Video Art event (from 20 to 25 October) all works selected (HEP and ESAD.CR) will be rolling in the Multimedia Room in a rotational format at the opening hours of the museum. 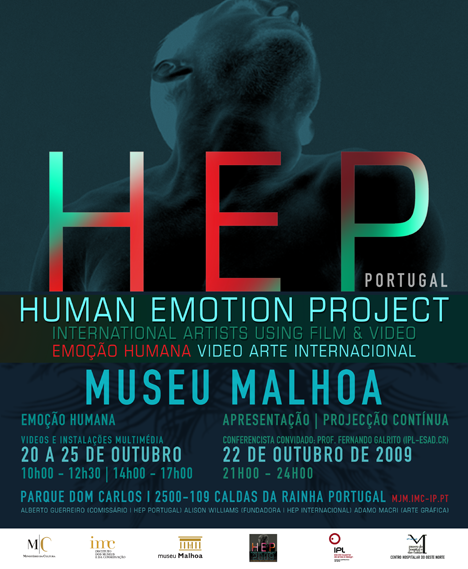 The Exquisite Corpse Video Project (ECVP) is a unique video collaboration among international artists, inspired by the Surrealist invention, the "Exquisite Corpse."

In the Surrealist 'game', a paper is folded such that each contributor sees only a small portion of the previous contributor's work, and begins his own work from that small portion. When the last participant is finished, the sheet is unfolded to reveal a strangely divergent, yet contiguous form or figure.

Using the semi-blind, sequential method of the surrealists' game, ECVP participants create video art in response to the final ten seconds of the previous member's work. Each member is asked to incorporate these seconds into their piece, creating transitions as they please, until everyone's vision is threaded together into an instigating final "corpse."

Coordinated by the Brazilian artist Kika Nicolela, the ECVP project started in April 2008 with artists who met online at the networking site artreview.com, and, over time, other artists were invited to join in. Only recently could such a fast-paced, pan-global, audiovisual variation of this exercise be produced. The inspiring process of exchange among 'strangers' from around the world illuminates the possibilities of globalized, collective creativity.

The second volume was made, which includes 12 new videos made by more than 50 artists from 20 different countries. Each of the 12 videos of the ECVP Vol.2 has a theme, so the artists responded to these themes as well as to the pieces they received from the previous artist.

My contribution to project´s Vol. 2 is the initial film to thread "LANGUAGE" and a middle part film to "ENCOUNTER".

The U.S. Premiere of The Exquisite Corpse Video Project Vol. 2 will be
Friday, October 30, 2009. 8PM at ARTIST´s TELEVISION ACCESS,

This evening's screening at Artist's Television Access, will screen the first six of 12 films, followed by a short videoconference Q&A with a panel of participating artists from around the world. Doors open at 8 PM, show is at 8:30 PM. 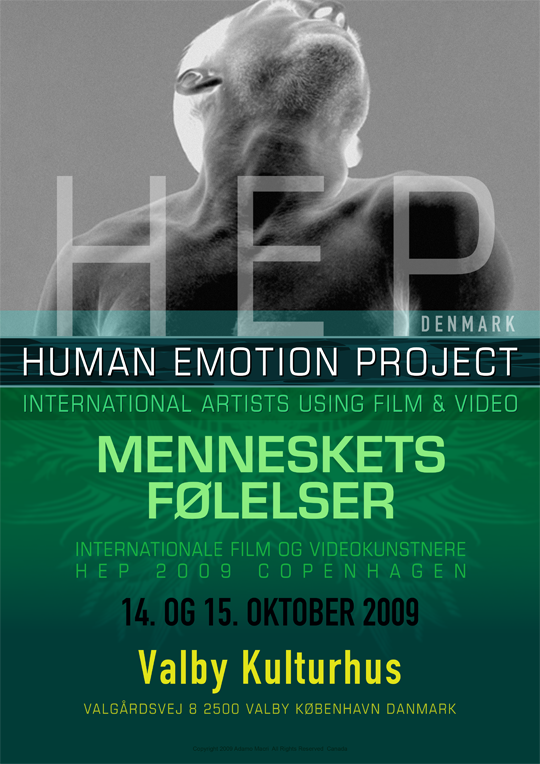 CIRQUE AUDIVISUEL is an art event, taking place at Kolbhalle, Cologne, Germany at 5th september 2009. Curator´s aim is bringing together film and music that are not made for each other in order to create something new. Eletronic music will be combined with film works of more than 20 video artist. There will be a video art showroom, live visuals, multimedia live act and DJs will create soundtracks for three fictional short films live.


Curators have chosen my video "THE VACATION" for this event, which is one of GERMAN CARTOONS a complete new production on recent German history and what is associated with German culture in general. The project is still under construction and Party Cirque Audiovisuel is the first place to show one of the films to the public. 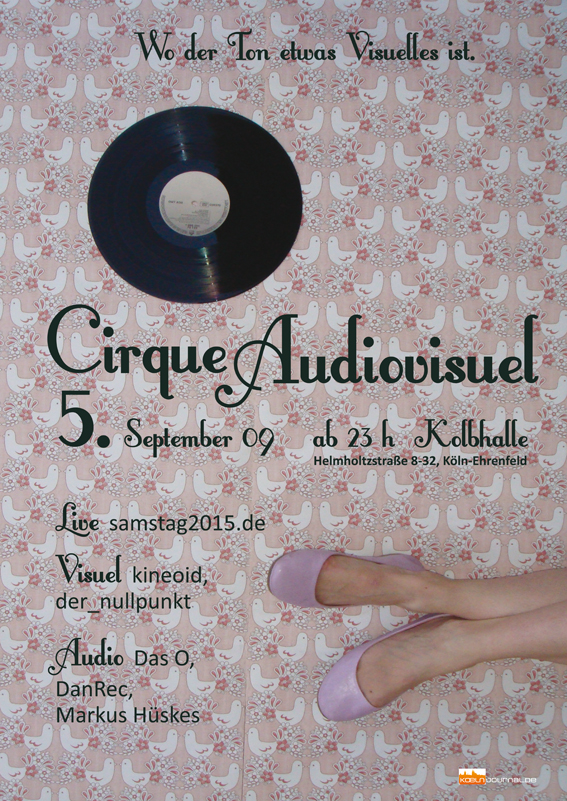 1. International Art Action Istanbul 2009 is presenting more than 100 artworks, performances and art video at three locations in Istanbul. The festival is organized and curated by Sevgi and Evrensel Urum and will take place from 26th september to 5th october 2009.

Curator Sevgi Urum has chosen LOST CITY for screening at Istanbul Photography Center at 5th, 6th and 10th october 2009. LOST CITY is the 4th PHILOSOPHICAL CARTOON, a collection of films translating general approaches to human condition - usually part of philosophical disciplines - into video film. The 4th PHILOSOPHICAL CARTOON is about how our perception system influences perception of our environment.


The "Foundation of Revival and Development of Cultural Heritage of Shida Kartli / Georgia" will launch this year a new Festival of Contemporary Art in the Art Villa Garikula / Ahkalkalaki (5th of August - 25th of October '09). The Chairman of the Foundation - Karaman Kutateladze - will host artists from Austria, Georgia, France, Netherlands and the United States of America. The artists are invited to realize individual projects in the frame of the given context "pavilion". The goal of each project is to create a specific platform in order to faciliate the exchange of artistic views as well as to stimulate different practises of contemporary art.

The first part of the International Art Festival "FEST I NOVA - Garikula '09" will start on August the 5th with the Austrian project "ici GARIKULA", followed by American, Dutch, French and Georgian presentations.

An exhibition - dedicated to Kirill and Ilia (ILIAZD) Zdanevitch - will take place at the National Museum of Georgia, in collaboration with the French Embassy in Georgia, the Centre Alexandre Dumas and ART VILLA GARIKULA.

By employing the largest palette of creative possibilities, film and video artists from around the world strive to externalize those complex driving forces that we all enjoy and endure and that bind us, as humanity, together despite our differences. 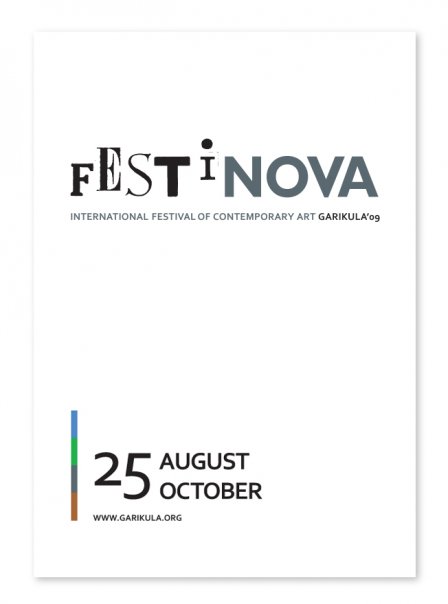 Kyra Munk Matustik said…
Dear Joas, thanks for invitation to the article, somehow I could not open the link...

International ArtExpo is selecting all interesting video/short.films to include in the next 2011 Exhibitions.

ArtPlatform said…
Hey, good to meet, I took a look at your site as you suggested and your work made me feel it was powerful and emotional, as if it has an edge. alison williams said…
thank you :)
u welcome
i just back

Efrain Eleazar Aguilar Jr. said…
Thanks for inviting me to the site..and i see you do a whooolllleeee lot!!! Lots of knowledge to acquire from you!!!
Il Keep in touch

Vienne said…
hi joas, i like what you do. email me and let's collaborate.

Your work is very organic. It's a pleasure to see it all & take it in. CD