Marek Tobolewski's exhibition is titled Sym, with individual paintings and drawings going under names such as 2LC DipSym Neg and 1LC SymM+R. The fact that such designations come across as suggestive of cryptic or downright impenetrable technical formulae to most of us might stress the artist's apparent reliance on precise systems of procedure, but this in no way distracts from the work's enduring enigmatic lure.

Tobolewski might skirt dangerously close to the kind of spaced-out geometric mannerisms that, in a less sensitive artist, would betray a paperback misreading of the cosmic implications of chaos theory. Yet his is a rare skill in being able to make such references at the same time as imbuing every one of his swirling lines with a highly personal lyrical grace.

This is art that comes over all joyous although it has obviously been achieved through sustained reflective struggle.

After the critical acclaim of last years Continuum in Symmetry solo

at the Djanogly Art Gallery, Marek Tobolewski follows up with Sym

his 1st intimate solo with the Tarpey Gallery.

2010 residency, with a common tread of the continuous line in rotated

from the ongoing Continuum series sit alongside small studies

made specifically for Sym.

albeit in a state of perpetual evolution. Tobolewski reveals an ongoing

preoccupation with the endless reinvention of his own compositions,

where he continually returns to existing works, adjusting structures

and refining each individual flow of a line.

The Continuum series has evolved over many years, formal abstractions

surfaces of pure colour and exposed under painting. In the outset,

the making process, spontaneity and intuition inevitably take over.

Long gone are the descriptive titles of the A-symmetrical works of the past,

2LC DipSym Neg or 1LC SymM+R cataloging the process of the line. 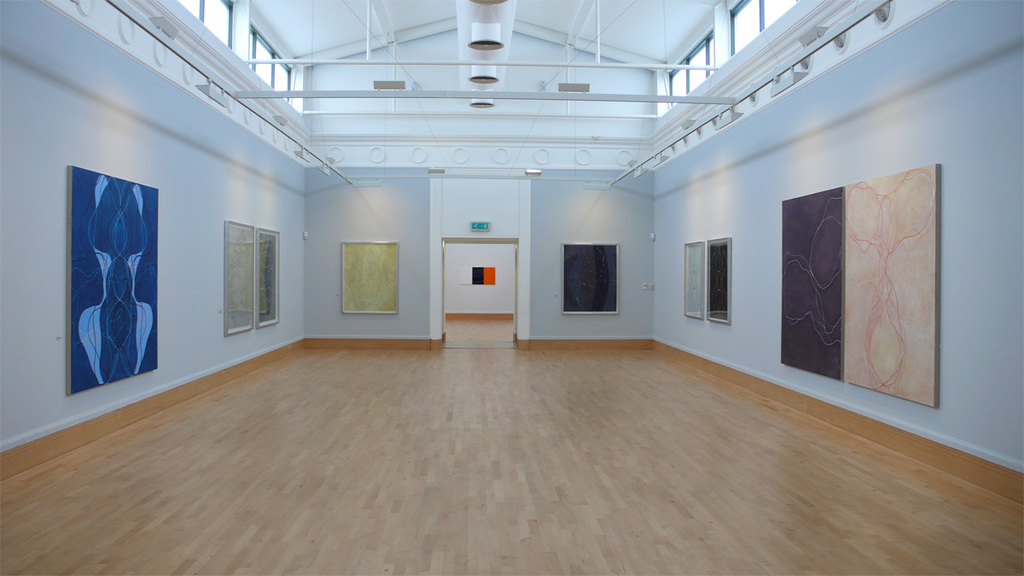 As the seasons go round and round, Nottingham artist Marek Tobolewski’s work continues to entrance and mystify. Continuum In Symmetry Djanogly Gallery,
is the most impressive show of Tobolewski’s I have ever seen. His work seems to have expanded to fill the crisp open spaces of the Djanogly Gallery and the audacity and ambition of his 20-year project are at last given a stage on which to express themselves. ... For me, this exhibition achieves a grandeur I had not previously expected to see in Tobolewski’s work. The painstaking repetition of the circles had in the past suggested something smaller, more precise, more intricate but without the sense of presence that the grandest art necessarily creates. In this big gallery the work comes into itself. 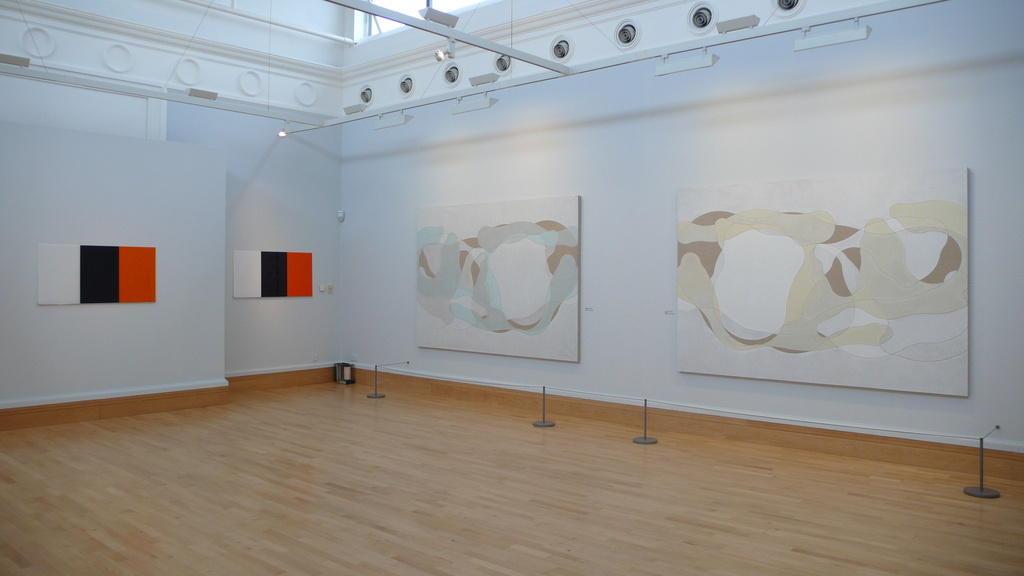 Marek's emphasis on drawing permeates the paintings, leaving traces of the decision-making process underlying each paintings' construction. Serial circular arcs imitate and perfect a natural curve of an artists' reach, with gestation periods between each decision point: like a time-line, accelerating and slowing. At times lines become dense: deliberated in twists and junctures. Restlessly fluctuating they give a feeling of lightness and air, a three-dimensional nest-space. Your eye dances with the changing directionality: parallel, divergent or convergent, implying perspective in silhouetted three-dimensional form. Your eye dances not just across the plane of the painting but also backwards and forwards in the three-dimensional area between you and the painting.

Ruth Solomons is an artist based in London 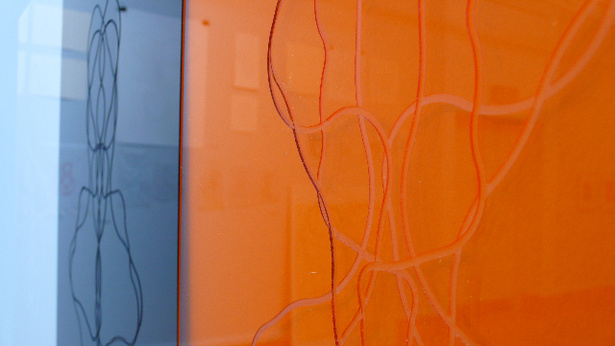 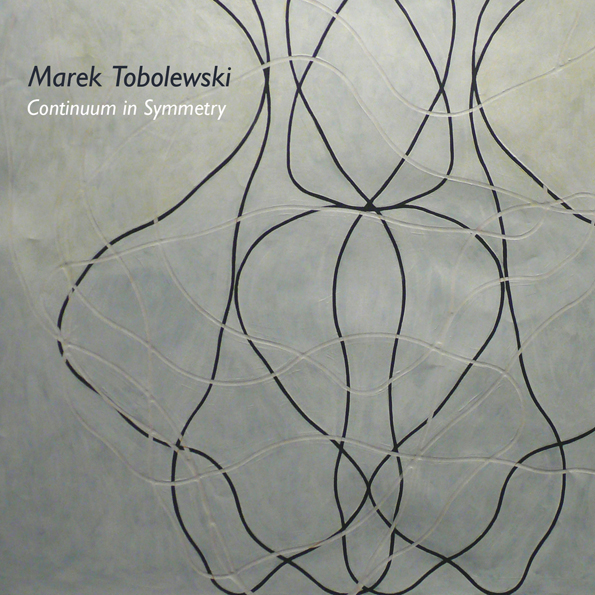 Robert Clark - Guardian - Pick of the week
Collectively titled Continuum In Symmetry, Marek Tobolewski's recent paintings and drawings present variations on taking a line for a distinctly worm-like walk. Subtle surfaces are worked and reworked to form a ground for linear improvisations that look like the rhythmic markings below the high tide line on a wet beach. Despite their apparent aesthetic gracefulness, there is something almost obsessive in these relentless organic abstractions. One cannot but wonder at the artist's patience as he works with no end in sight to these seemingly aimless graphic meanderings. It is this very slight sense of unease that establishes a kind of psychological undertow.

" .. These meticulously crafted lines meander across canvas and paper like the very best of choreographed snail trails. They appear deceptively simple, but are painstakingly layered and gently intertwined to create deep and penetrating visual field which draw you ever inwards. With all the works on show, intrigue, ambiguity, and understatement are combined with colour and form to generate an immersive warmth and calm evocative in part of a protected state of pre natal suspension. .. " 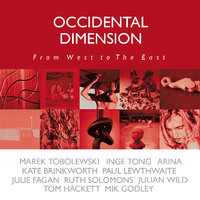 Occidental Dimension is an exhibition curated by Marek Tobolewski
in collaboration with Source the Planet and the Faculty of Arts, University of Brighton. It is the first of a touring show which is then to be staged in cities throughout China.

The show builds on the University of Brighton’s commitment to advance and debate new art in tandem with the theme of the Brighton Festival. This year Brian Eno, festival creative director, has positioned culture as an ecology of ideas, exploring how cycles and the recycling of ideas can sustain the vigour of the arts over time.

If you're an artist, what kind of art do you make?
Drawing, Painting, Printmaking

I am...
Visual Artist

What exhibitions are good at the moment?
Nottingham Contemporary

Steven Ingman said…
Hi Marek, I have to say that your latest work looks amazing, looking forward to seeing it in the flesh.