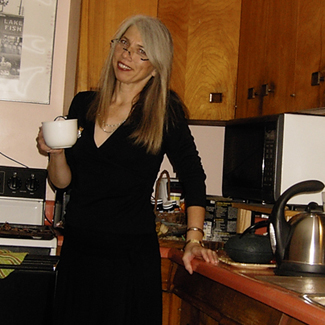 If you're an artist, what kind of art do you make?
Digital, Installation, Photography, Video

Is all that we see or seem
But a dream within a dream?
=Edgar Allan Poe

About my artwork
Video, photo

Centre of the artworld:
online, nowhere and everywhere

War is Peace
Freedom is Slavery
Ignorance is Strength

George Orwell’s famous words in his 1949 novel Nineteen Eighty-Four provide the framework for me to consider the state of today’s world. As predicted in the novel, we accept routine censorship by “doctored” information as a way of life. What better way for me to comment on this phenomenon than to protest the Iraqi war with “doctored” images of my own?

The digital images displayed here have been created since the attack on the World Trade Center on September 11, 2001 and the consequent American invasion of Iraq on March 19, 2003. Through image manipulation, I question the meaning of patriotism as well as the wisdom of settling disputes by sanctioning an ongoing massacre of people.

This collection of images has become an iconic protest of war, as well as a grave commemoration of all those who have suffered, including the U.S. military fatalities and their families who grieve, the thousands of wounded soldiers, the estimated 600,000-1,000,000 Iraqi dead, and the estimated 4.5 million Iraqis driven from their homes. I ask you to pause for a moment to remember those who have sacrificed their lives while engaged in this controversial, unpopular American war.

Hi Jan I just realised you are on this site and have not become friends yet also great work in the Round Table group.

niki hare said…
heh heh, i loose track also...good to have you in the collab group!!

Thanks for the connect.

John Criscitello said…
Great speaking with you @ SOAG the other night....please let me know when you have time for a studio visit

The Sandler Brothers said…
why how kind of you to offer Jan. Count us in, can't wait to see ya.
-zachary

The Sandler Brothers said…
thanks so much for you sweet and thoughtful words Jan, when are we gonna see you back in NYC?
p.s. - re the Bald video, we'll get to the bottom of it :)

Marty McCutcheon said…
Jan- Thanks for the quick sign-up at the Self-Portrait group. A group with only one member is a lonely thing. Warm wishes from the sunny Edge of the West.

Yury Toroptsov said…
Thanks, Jan. I am afraid the sleeping men are not sleeping in the right order. I have to figure out how to upload them in such a way so the first comes first :) Thanks for stopping by. Best, Y

Alex said…
Dear Jan,
Thank you so much for your kind comment. I worried a little it didn't fit in, but at the same time I don't think it has to be complicated and dark to have meaning. I'm glad you also feel there has to be balance :)
It is indeed my baby, now 16 months and this very min. crying his eyes out because he wants my attention. There was a nice moment in the final 10 secs which unfortunately you can't see anymore, his eyes blinking, also the first meeting with the world. It's a pretty tough journey.
I haven't had a chance to watch your bit yet, but look forwards to doing so. All the best for 2009! x Alex