I am...
A painter of figurative works in oils.

About my artwork
I'm a believer in the struggle to achieve the purely innocent eye. A "Cezannist". That is an impressionist constantly trying to measure his/her "impression" without prejudice and with accuracy. That is Cezanne's lesson and revelation.
I love Velazquez for his modernity. Vermeer for his sense of space and teaching us how and how not to use the camera. Cezanne of course, as the ultimate plodder of modern art who steadily climbed the mountain. Giacometti, innately more gifted who took up the challenge. And all the other heroes: Picasso when he and Braque were one person. Gris as the best of the lot. Lipschitz, the sculptor and Soutine for bending space. Bomberg and his followers. Bacon, the master trickster. Hopper, de Kooning and Diebenkorn and all my fellow loser artists on this site and elsewhere for dreaming and persisting and never giving up in the face of ridicule, envy and outright contempt.

Artists I like
Those mentioned above plus a hundred others.

What exhibitions are good at the moment?
None in my area at present.

Born in 1947 in Toronto, Hillel Kagan has been a professional artist since graduation from Central Technical School Art Institute in 1967. He began showing works in 1975 and has been a full time painter since 1985. He has had shows, both solo and group in private and public galleries. Hillel is currently self represented and if you're interested in more information please feel free to contact him directly.

I showed your watercolor on Facebook, saying: 'this guy is a painter', and the Danish art critic Ole Lindboe replied: 'indeed he is'...

All the best, Bjorn 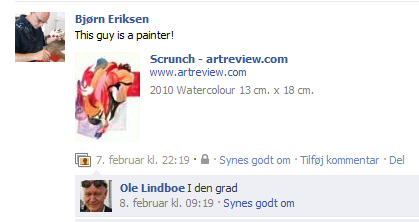 Cassandra Kyle said…
Really love how you get the texture of the colours right wonderful.

Janet Gathier-Coomber said…
just had an enjoyable run through all your work ..
thanks
am looking forward to seeing more

Nuff said…
your page is always a joy to run thru. -N-

Susan Singer said…
Thanks for the feedback. I think you're right about needing the sizes. Most of them are quite large - 1 meter x 2 meters or so. I'll try to put the sizes on in the next few days.