I am...
I have always found photography to be a highly inadequate medium for communicating ideas. However, it is this very anxiety with the medium that spurs me on to find a new visual language to work with and, I suppose, a new vocabulary from which to derive my glossary of life. So what motivates me are not the possibilities it opens up, but its inadequacies.
My work has an aesthetic quality that some define as being precise. However, the process by which the images are created is everything but precise – and this duality interests me. For so long photography has been about control: I like to relinquish some of this control and utilize the serendipitous aspects of the medium. Photographing in the dark, for instance, is a chancy business, and you never really know what you will end up with until you see it.
Photography offers me a structure, the structures of the world. Using these as a starting point I am then able to redefine the parameters of the medium (whatever these may be). I comment on the world around whilst at the same time trying to resolve my relationship with the medium. However, the process of resolving is always much more interesting than any resolution, which I never come to in any definitive sense. In process there is no real end product, just a set of propositions.
Paradoxically, the very language of Photography which I find restricting and inadequate, helps channel my thoughts and ideas.

About my artwork
There is an absence of life, a paucity of purpose, and a sense of the uncanny that permeates the silence of these photographs, whose scenes, like a black hole, seem to have consumed all traces and signs of life. The sun has been usurped, in its absence, by a mysterious source of lighting, that pushes back the blackness of the night and we are obliged to fill in the absences that it relentlessly exposes. All that represents the ambience of a holiday beach is missing. The pervasive tranquillity is paradoxical, not calming but disturbing, discordant, incongruous, the viewer longs for the signs and symptoms of life to pump up the visual volume and superimpose the social identity of this place.
Given the paucity of clues offered, our curiosity is inevitably aroused and the detective in us begins to prowl around these scenes. Which country are we being shown here, which season could it be, spring, summer or autumn? What time of night is this? We might reasonably guess the early hours of the morning, so why the copious floodlighting? Is this a redundant film set awaiting the actors’ return, or perhaps an inanimate model in the mode of the miniature mise en scene landscapes of the American artist Michael Ashkin? The possibilities proliferate but there are always more questions than answers, always more assumed reasons than reality could hold down.
This is the flip side of Massimo Vitali’s photographs of North Italian beaches which teem with life and action where our gaze becomes satiated by detail, our eyes and our minds held firmly within the frame, here in these images our mind begins to wander beyond the frame. In an attempt to reinforce the rickety ontology of this work we are tempted to rove beyond the confines of the frame, under the red-hot glare of analysis the frame begins to melt, imagination breaks through its thwarted threshold, the party’s over and we want to find out where the revellers have gone, denied access to the social raison d’ettre of this scene we inhabit it with our own imagined populations and their narratives.
The solid blackness in these images has an air of the supernatural reinforcing that intangible yet somehow persistent presence of the uncanny – an abyss whose threshold teeters on the edge of credibility, where the indexicality of the image can only be tentatively maintained by the viewers suspension of disbelief.
The dark skies seem to offer a conduit to that whelming black void of interstellar space that signals things eternal – time is not just frozen here but eternity-touched. These scenes take on their own existence whose stillness and silence can only be suggested, a suggestion decisive enough to strongly signify a gnawing absence, an overwhelming sense of the melancholic. The sober and solemn reflections that haunt us after the euphoria of the party has passed and worn off, as entropy picks at its remains, as conversations fade into memories that bridge the void, all imbue the mood of this work.”

Edgar Martins said…
This is not a House

It is true that the idea of objective truth may no longer hold in critical theory, but "This is not a House" has never been about asserting artistic authorship. Photography is a medium built around conceptual tensions and so it offers me a means to bring together irresolvable contradictions.This project sought to catalyse and reunite fresh experiences of a new form of American architecture by summoning a disquieting conjunction of realism and fiction.Fiction – as the essays in this book have hinted at – is elementary to understanding and unravelling the real. Over time we have accepted the fictions we have constructed as facts, making us the forgotten authors of our own narratives.The houses depicted in this series do not refer just to the particular. They are images of spatial assemblages, of kinds of stages on which a number of quite different (and perhaps incompatible) narratives might be enacted.These images, these buildings, these ruins, reflect back at us the human constructs that we project and impose on them.This Is Not A House emerges precisely at that juncture where clear words falter, where language is disturbed. It hurls us into the antinomies of perception and existence, the exploration of limits, the horizon, unstable boundaries. The work traps our visual literacy to the point where we no longer recognise ourselves in the referent. As if nothing were guaranteed.The meaning of the world is no longer carried on its surface, if indeed it ever was. Edgar Martins said…
Not one to take awards and accolades too seriously, but always good to know that my work resonates with people.
Happy to share with you that the project When Light Casts no Shadow has been awarded 1st place in the Fine Art (Abstract) category in the prestigious 2010 International Photography Awards. The details of this winning entry are available to view at www.photoawards.com under the 'Gallery' section. 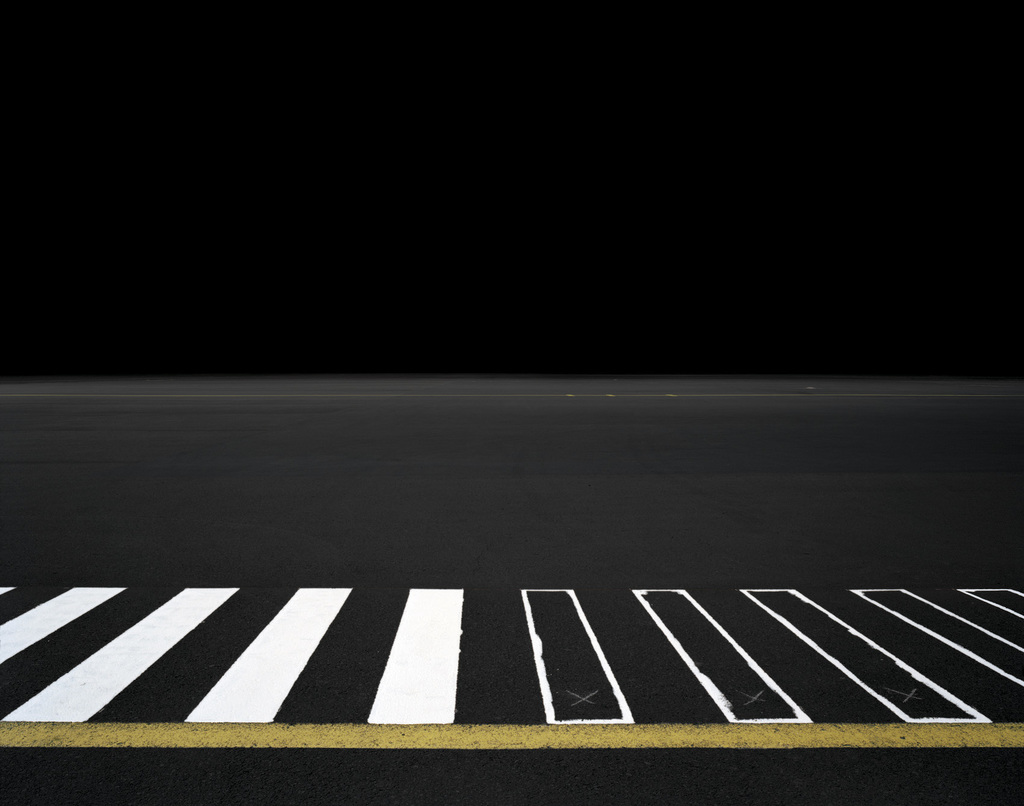 Edgar Martins said…
Look out for my forthcoming show, the largest one to date. This show will count with nearly 60 large format works and is curated by Sérgio Mah (Photo España).
The Centre Culturel Calouste Gulbenkian will also be publishing an anthology of the work. For more details please refer to enclosed press release. 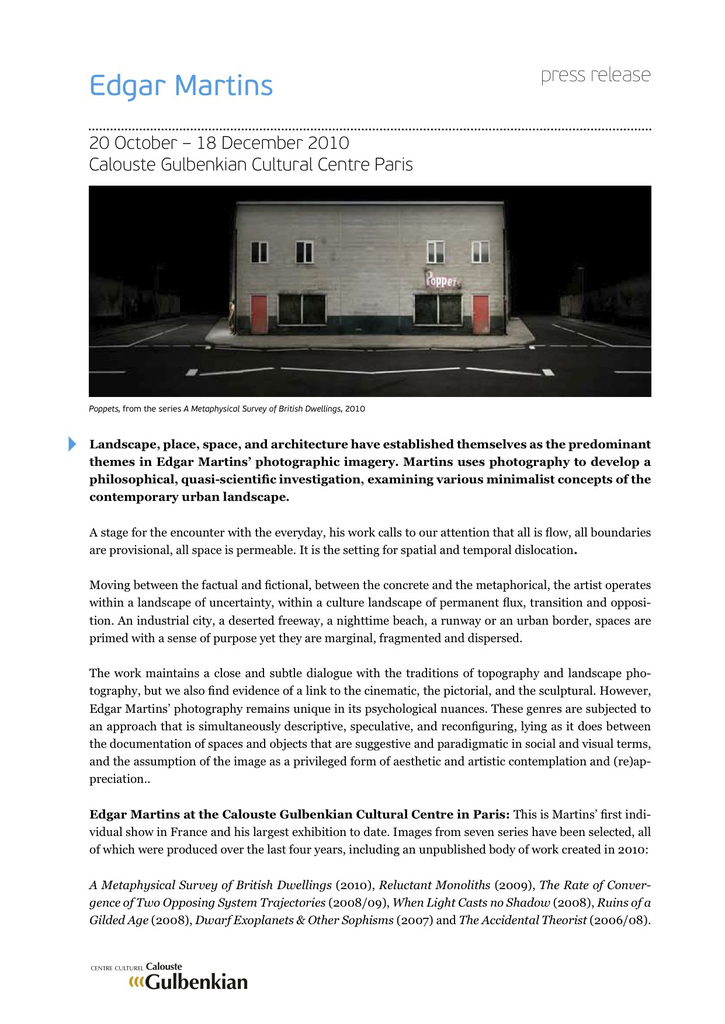 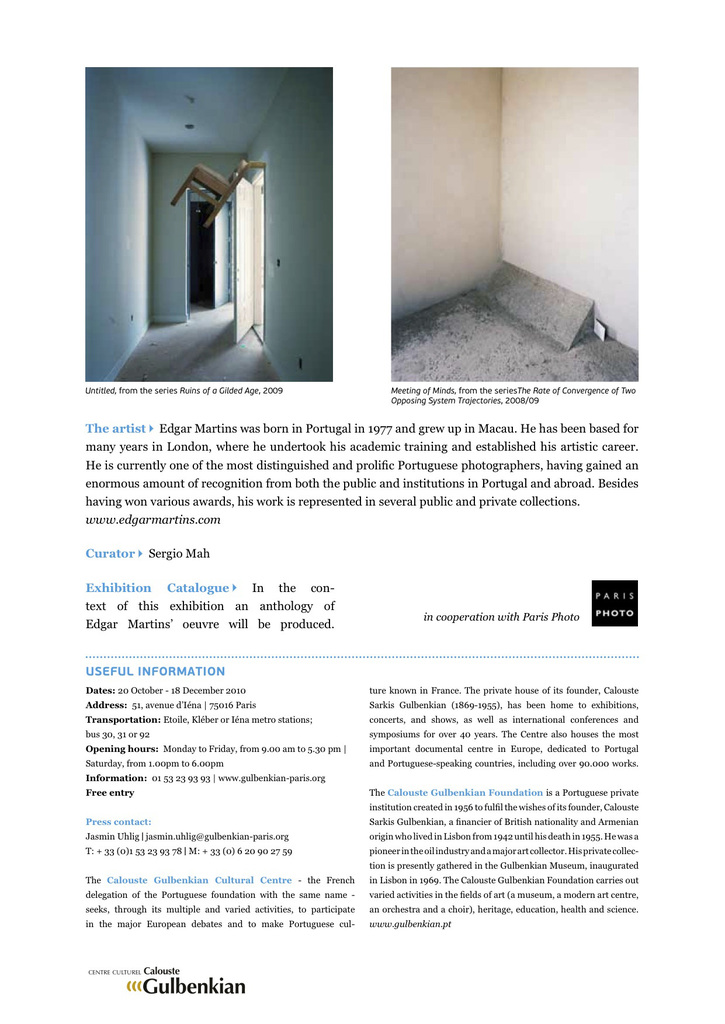 Edgar Martins said…
Look out for my forthcoming shows: Edgar Martins said…
Thanks for all your comments. I am unable to check my page on a regular basis but appreciate the feedback. Best, E Martins

Wina Jie said…
Love the reductive compositions and how each image seems to be enveloped by darkness. Can't wait to see where your next work will take you.

Lola B said…
Great pics yes, I like the strange atmosphere and the strong compositions.
Lola