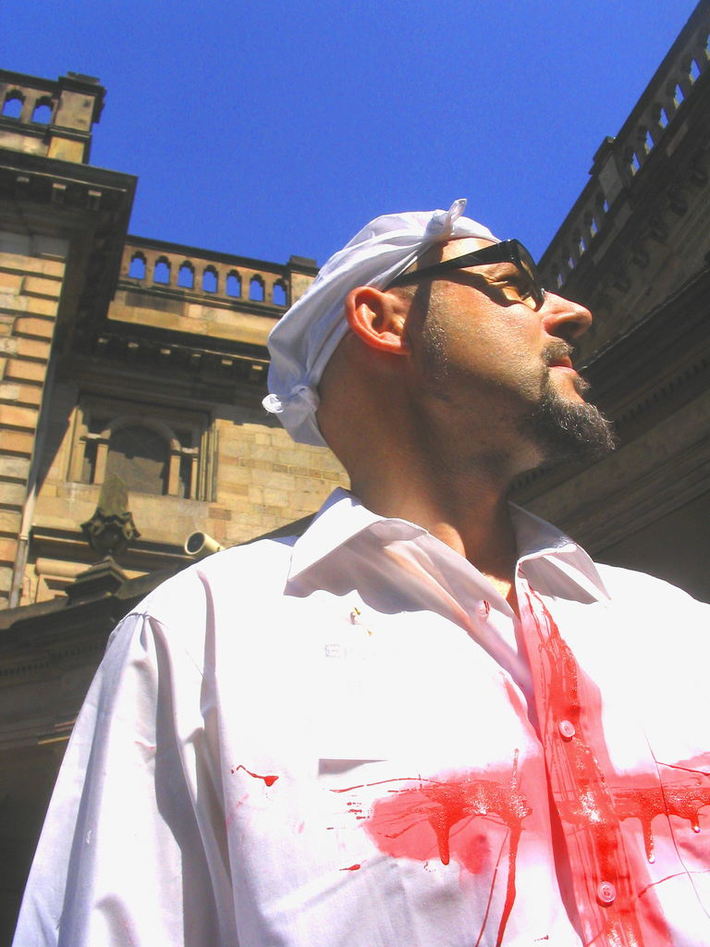 planning 'i can see your house from here' at CRUISER HQ, SAT 27TH fEB

If you're an artist, what kind of art do you make?
Conceptual, Drawing, Event, Film, Installation, Painting, Performance, Photography, Printmaking, Video

I am...
based at Nottingham's Oldknows Factory, I am an artist who explores what ever media seems appropriate (including sound, music and choreography). I'm a also a bit of a musician. I play with a drumming group (urban groove merchants), operatic diva Anegelin Waren (in Cafe con Brio) and folk punks Wholesome Fish. I also use music in live art perfomances with Cyril Seaton's Cycle Roots, which includes Simon Withers on drums and Gareth Jordan on film/audio visuals (I play squeezeboxes). I'm free lance but have recently been appointed (one of five) Associate Artists at Nottingham Contemporaray and I'm teaching every Wednesday at Derby University (Lecturer in Visual Studies). I'm enjoying teaching at Derby very much, and NottCon is fab! I'm so glad to be part of this special place, it's a passion (do come and experience it)!

About my artwork
until recently, most of my artwork was inspired by my exploration of cultural identity/ies. I was especially interested in that of 'The Englishman', because it's mine and because it's been so uncool for so long! More recently I have become immersed in new (more innovative) discourses. Together with fellow Oldknows Studio artists Simon Withers and Yelena Popova I established ‘Cruiser’, an international network of creative practitioners who travel hopefully across media, disciplines, boundaries and categories. We are inspired by Baudelaire’s Flaneur(1) and the Situationists, who, with their derives(2), sought an active engagement with the idea of the city, through which they strolled (hopefully). We are informed by the ‘dialogue as practice’ theories explored by the likes of Hannah Hurtzig, Rainer Ganahl and Nicolas Bouriaud, who travel hopefully across academic, communal, marginalized and expropriated space/s. And we are influenced by the multiples of Fluxus and its mail art, which was franked, stamped and embellished by the incidental mark making of mechanised travel as it journeyed hopefully around the globe.

I am more interested in the idea of art as speculative conversation than art as authoritative statement. Though I acknowledge and embrace the extent to which my own practice is informed by the discourse/s of the history/ies of art, I find the endless reproduction of art objects-as-commodities banal in the extreme; whilst the endless reproduction of craft-based techniques (such as painting or sculpture) seems anachronistic, especially in this digital age. I delight in the multiplicity of narrative interpretation that characterises contemporary approaches to art and associated philosophical discourses. I seek to make alliances with like-minded creative practitioners and thinkers around the globe. It’s a difficult journey, but someone’s got to do it! Hold on to your hats!

notes
(1) The term ‘flaneur’ was popularised by French Symbolist Charles Baudelaire. The flaneur was one who engaged with the city by strolling through it
(2) For Guy Debord (and the Situationists) the ‘derive’ was a means of engaging with the city in order to challenge its assumptions with regard to the organisation of time and space. To Joseph Hart, the derive is ‘just about anything that takes pedestrians off their predictable paths and jolts them into a new awareness of the urban landscape’ (A Newy of Thinking, 2004)

Interests
making sense of the absurdity of the human condition by living a creative life...this is what interests me most... and making use of other people's ideas: reading widely, talking...especially at the studio with friends and colleagues such as Yelena and Simon...and chewing the fat with my gentleman friends: Mat, Mathew, Pip, Richard, Simon...lingering and laughing over a meal with a decent glass of wine or six (and maybe a cigar with Mat)...and banging a drum with some sexy sambistas...and Big Nights In with my wife (which are better than any big night out)!...and going for wild walks in wild countryside with my wild family (Emma, Flora and Roo)...and gatherings at Lincoln with my Mum, brother, sister and their families...sharing thoughts and feelings on a book with Nick, Mathew, Roo...and...walking on the Malvern Hills with Elgar in my head...or drinking with Wholesome Fish after a shit-kicking gig...are these interests? Or are they passions...I don't have any hobbies (unless you count gardening)!

What exhibitions are good at the moment?
Space City
@ Nottingham Contemporary
Spring 2010

Michael Bowdidge said…
Good to hear that you're feeling positive about it all. I was surprised that NCAN went, I would have thought there was more need for an organisation like that in the current circumstances, rather than less, but 'horses to water', eh? (*sigh*)

I enjoyed having a flick through your slideshow, I particularly liked the shelf pieces - keep on truckin' :)

Michael Bowdidge said…
Hello sir, hope all is well given the current climate of uncertainty

sofia greff said…
thanks for request. I like your installations. The combination of materials and colours. Best wishes, sofia