A Glimpse Into The Forest

I am...
first and foremost a painter & champion of acrylic paint. I have been using and exploring this medium for nearly 35 years now and it continues to surprise and delight me! I am also privately involved with the paranormal. I have never lived a day of my 62 years without having, at least, one cat near me.

About my artwork
My work involves itself with the metaphysical aspect of all things. I also portray the world around me in a dream state - purposely omitting the obvious so that the viewer may see their story in my imagery.

Artists I like
Giorgio de Chirico and Ivan Albright (of Chicago, Illinois)

I would be remiss were I not to mention my mentor, the very person who "told me" I had the hands of a painter when I was just 24 years old and living in Provincetown, Mass. on the tip of Cape Cod in the U.S.A. Her name... Bonnie Whittingham.

In Search Of The Past... 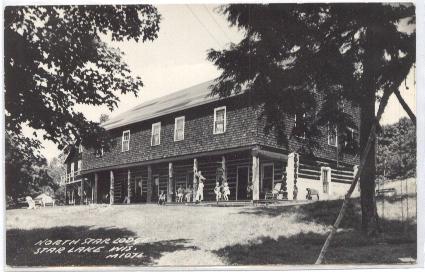 North Star Lodge in Star Lake Wisconsin....
The place where I spent my youthful summers from age 5 until I was 26 years old. They were splendid years for me - free from all responsibilities or concerns of any consequence. 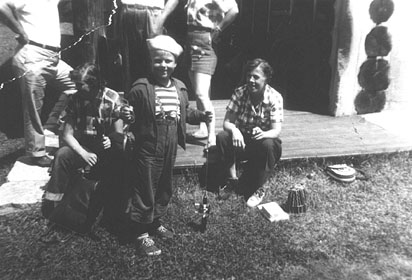 I'm the kid in the sailors hat

After we stopped spending summers at Star Lake most of my memories stayed with me, but each year I realized small bits of those memories were being lost to time past. Certain pieces no longer fit together. Names of other guests, friends and employees were now forgotten. Many events were misplaced in the wrong year of their actual occurrence. As the years past more and more of my happy memories of North Star Lodge all but vanished. By the time I was a grown man the memories of North Star Lodge had merged into a single non specific remembrance of a pleasant part of my childhood. Life marched on. Years turned into decades and all the decades merged together as I entered my sixty first year of life.

Not too long ago I began thinking back upon the years behind me; as I suspect many of us do at a certain point. It came as no real surprise that the long ago memories of Star Lake and North Star Lodge would return to me. When they did, they came in waves of specific names, years, adventures. It was like reading a book. The book of the "lost years" of my now long ago youth. An evening spent on the internet gave me all the information I needed. Of course the lake was still there but so was the lodge and from the photographs everything looked, almost, just as I remembered. The lake, which 90% was always owned by the state of Wisconsin, had been saved from the over development of summer homes and condominiums. The lodge, cottages and dining room of the resort had been restored by the family who now owned North Star Lodge. Each building was lovingly restored to how it had looked when I was a child and even long before then (The lodge was built around 1896). The only major change was the growth of the trees and some of the shoreline which had been altered by weather conditions over the 40 years I had been away. The next day I made reservations and three weeks later I returned to the site of my childhood summers. It was like time travel in many ways. The drive from Chicago was now an hour shorter than it had been in the 1940's through the very early 1960's - the reason being was interstate highway 51 was now a large freeway and bypassed the small towns whose "Main streets" were once used for stops which provided the motorist, food, gas & supplies and/or overnight lodging.

The two weeks I spent at North Star Lodge were pure magic. I did many of the things I had done as a kid - at least as many of those things I could still do at (now) 63 years old. The cottages and lodge rooms were all now housekeeping not the American Plan they used to be. The dining room was now a restaurant open to guests as well as non guests and there was a bar (!) - something that had never been at the resort "in my time"! When it was time for me to leave my mind was filled with thoughts and plans to return every year for the rest of my life; maybe even try to buy a little land, which was then available for sale, and have my own lodge built on the lake. I spent the hours of the long drive back to my sister's home, outside of Chicago, thinking of my plan to relocate to Star Lake. I was as excited as I had been as a kid when it was time to drive up to Star Lake for summer vacation. Then it hit me - came over me like a full bucket of ice cold water. What I thought I had found was my lost youth. True, North Star Lodge was as special as I now remembered.... but what I was seeing, in my thoughts, was the place I remembered. Even if it did look much the same... it wasn't the same place. My childhood at Star Lake had passed. I could always return (and do) but not to search for something lost... rather I now return looking for something new and not in any way associated with the innocent years of my childhood. 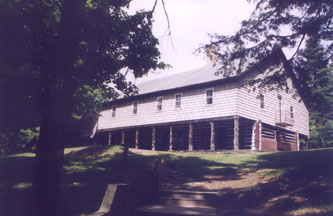 North Star Lodge as it is today
'

For All Those, Now Dead, Who Were Once Admired & Loved But Are Now Long Forgotten, Your Stories Awaite To Be Told Once Again - On The Otherside Of This Door. COMING SOON: The Gothic World Of Oak 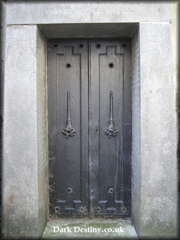 And so, with a well stocked supply of Ivory Black & Titanium White, stretched canvases of various odd sizes and an impressive amount of new brushes in my studio and my mind filled to the very brim with ideas, plans and visions, I begin my first completely new series of paintings in more than eight years!

Until the present time I had been working on THE APARTMENT series. First, for the show at Etherton Gallery. Then seven separate commissions for repaints of THE LIBRARY painting… Continue

One of my images will be included in the digital display at the SeeMe exclusive pro-member reception at the Louvre this coming July 13th.

What are you doing ?

Hugh Thomas said…
Your comments are very kind. But art is very difficult as it is about 'the being,' reasons of no reasons; that 'why'. Thanks. Kind regards, Hugh

dawn hilton said…
Hello my dear muse, how are we now?

I'm very rare on here these days, but I do try to get on when I can.

So many things going on right now, moving home and the start of the holidays with the boys.
I was planning a six week holiday in the Highlands, but I have taken another house on and it will need attention to the garden etc.
I have a new storeroom, so I don't have to sleep with my art, my room will be inviting and titless, apart from my tits of course, can't be chopping those off.

I'm glad to hear you full of life and up to speed.

Keep your art coming and peace in your heart.

I sense you are over it now and for that I thank god with all my heart.

Be well my friend.

I love you, big kiss to Armando.xxx

Pennie Steel said…
Hey Bradley, did you ever et to start that work based on my pic?
Pennie

dawn hilton said…
Yo Bradley, How are you my sweet angel of the desert?

We are all fine, just messing about a lot with paint and cat's.

I have built a global community site, it is running itself now, I kept it basic so not to confuse people.lol

I'm doing a lot on facebook now, getting the odd contact here and there, far more pleasing than most sites and you get to meet some fine artists.

As for MR CAT, well he is a fat cat now, never stops eating.

He comes to school with me to pick the boys up, even stops whilst the lollipop man crosses us over the road, I'm sure he just likes the attention of all the children! ( Like he don't get enough)

He even jumps on to the trampoline with the boys to have a bounce ( no forcement) I think he thinks he is human.

To say he was a wild cat, he is so beautiful and friendly, what a difference a little love can make to an animal.

Well I better go and up load my latest work, I am in a creative swing at the moment.

I have so far created 10 works this year and taken numerous photos, The energy just won't stop.xx

Love to 'A' and catch you soon.

My new email is babehilton@aol.com

i feel very priviledged that an artist of your achievements would take the time to write such a long letter with so many insights. it has been about 3 weeks now that I have had quite limited internet access and so many people that I have wanted to respond to.

I am very grateful for your letter. Let me take some time now to read it and I will be sure to send a reply by mon or tues - am working on a large 3 foot wide commission right now for a gallery in England called British Art Academy. One hopes that all these ideas and interactions one day reach the public and make a strong statement!! 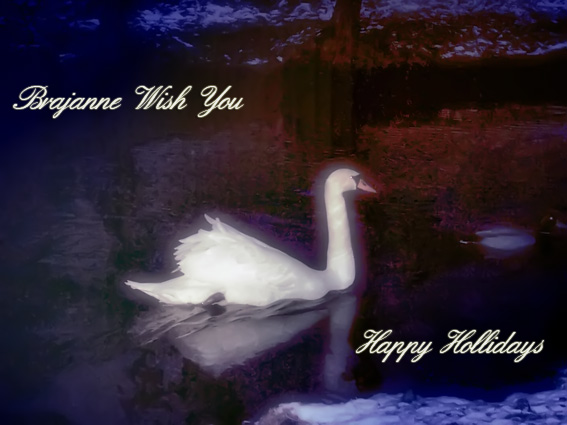