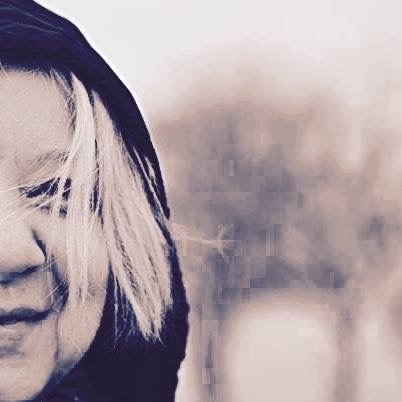 The title of the new exhibition of Berna Erkün also forms the title of my article. “ Flying Close Being Far, Being Far Passing Close”…a name containing a pretty lyric expression, primarily echoes with the emotional one. It also brings forward the inspiration that doing something from heart gives to the audience just like we see at the artist’s paintings.

The basic approach of the artist which has not changed since the beginning of her art life appears as a seeking for freedom. Especially on this last series of the artist who has different eras, freedom is no more a seeking or a basic approach but a concept with the forms that she uses. However when we focus on the paintings and their content, we realize that,  what happens is not limited with freedom but that, the artist wants to bring forward the fact of environment. To most apparent factor in this diversion is that, we are time to time facing with the increasing effects of landscaping at her paintings in terms of form and that she presents the flamingos in a attention grabbing approach, on windy as hurricane, dynamic and expressive surface in a two-dimensional approach all within this abstract expression...These two opposite approaches are also a way to make us close to the subject. Berna Erkün focuses on the flamingos which are one of the migrating birds and coming to Salt Lake in Turkey, upon news she saw in the newspaper concerning the disappearance of artemia which are the main food source of flamingos and found in Salt Lake. Along with this news, the fact that the birds are actually far while they are flying close to each other while migrating or their sudden gathering and starting to fly closely and their movements in s specific order provides the title of the exhibition. Furthermore the decreasing number of birds which migrate to the other places or die due to the decreasing food resources, rains and drought, the environmental disaster occurs as a consequence, is a subject which the artist has brought forward since 2005. However at this point, as much as we say that the bird form is reflected to the artist’s paintings  in 2005’s, we should actually add that they have been existed in her motives since the beginning of her art life. When we put a few steps backwards and look at her paintings, we realise that what happens in the painting brings some portion of drama to the paintings of the artist. However the presence of blue or pink shades in the compositions echoes an ironical attitude in the relation between the image and colour just like the artist’s wordplay in the title of the exhibition. The subject also plies between the ephemerality and also the continuity of this seasonal phenomenon. All these shows the artist as pushing the subject backwards in some portion and since she only placed one bird on the plane of the painting, our thoughts with this regards becomes stronger. Serenity in the dynamic structure, uncertainty in the dramatic structure comes to us as structure pointing out the lyric expression. Although the paintings of the artist are expressive and dynamic, references to the Zen-philosophy- Japanese culture which exists since the beginning of her art life can be seen on her precise approach and the traces of the serene and limpid expression spreading to the whole of her paintings. Erkün’s placing of different materials such as various writings selected or map images on the surface is proportional to the matter of taking the subject back in some portion as we mentioned above and a way of emphasizing the multi layered structure in her paintings by making references to her former paintings.

The effects of Lebanese philosopher, writer and painter Khalil Gibran on the Erkün’s works since 2005, become more apparent on this new series. Gibran is a philosopher who generally brings a different point of view to the social events in a poetic expression by combining the East thought system with Far East and Near East thoughts. Berna Erkün extends the frame of the human oriented expression in her paintings, by the individual synthesis she has developed by starting from the work of Gibran called” Sand and Foam”. Even though it is not in the forefront in this exhibition, we should refer to the intaglio which the artist made by cutting the papers, as an extension of the precise and pedant approach within the Far East and Near East effect and with this element echoing to the third dimension, Erkün shows us the races of another road by creating interactions with the geometric forms.

When we look at the works of Erkün, the splendent effect of the colours is seen as an effect that nearly blinds people and spreads to the entire surface. The impressionist era and especially the expression of the artist with the Monet effect are of the unchanging basic references of the paintings of the artist. Additionally, as the result of years of painting studies made with children, the connections related to the child paintings and the effects of lyric abstract expressionist Cy Twombly is inevitably reflected to her painting. The line element seen in Erkün’s paintings and its precession on the surface, the expressive drip paintings she sometimes uses and the slight thrill that is felt in the combination of the free brush marks show the positive effect spread to all paintings although the paintings of the artist are composed of the traces of different subjects.

The title of the exhibition resembles us Haiku what we can call shortly as “ the poem written as a prose. Haiku carries the marks of both poem and prose.” The artist met with Haiku in 1990’s after reading the book “ Haiku” written by Basho and translated by Oruç Aruoba and shows the wordplays that exists within nearly at all exhibitions thereafter. Erkün, who is coming up with a wordplay again in her new exhibition, comes to us with a wise approach in her era of discretion. She is whispering us various aphorisms or short texts with a philosophical expression. Now it is time to cock ears and think aloud....

may i deposit my fashion shop  www.hixwerybrey.com

Sophie Victoria Elliott said…
Thank you for the add, I really connect with your drawings. Sophie.

elka said…
Your artwork is very great, kept silent manage simply with colors and some forms to make cross your feelings!! Bravo!

yrealydad said…
Hi!, I´ve seen your work and I´ve loved it! I see also you are in the new fluxus group, I used to be there, but it was so quiet, I quit. Now I´ve seen you, I´ve joined again...hope we make it move somewhere! Your request made me glad for different reasons, First of all because of your work, and second because I love Istanbul and the whole turkey! I would be very glad to g on with some virtual/real cooperation!

Jalal Ariqat said…
Hi Berna .. I like your work . Thanks

pravin said…
hi,, Berna... sorry for late reply . i was away form computer for long time.... ur work is woow
i liked it...
best

Emily Clare said…
Very nice work! I was in Istanbul this past summer and loved it. Wish I had known about your work then. Check out my website and you can see some of my drawings. Last two years have been working on the Seeing From Within. www.emilyclarestudio.com
Thanks,
Emily