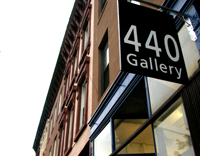 Centre of the artworld:
New York

440 Gallery is hosting its popular, annual small works show. This juried exhibition will feature any artwork which is small in…

Elements of Recall by Gail Flanery

Richard Eagan, one of 440's original founding members, is also a co-founder of the Coney island Hysterical Society, which became active in 1982. In this exhibit (October 18 through November 25), Richard is inviting his Hysterical Society co-founder Philomena Marano to join him in showing work they have done both individually and collaboratively through the years, including documentation of the Coney Island on-site projects for which they became well-known.

During the run of this…

featuring the work of:

Dont forget to create your own FREE Artists account and be in with the opportunity of getting your work featured in future issues :)

George Lund said…
Hi 440 Gallery and artists,
Pleased to meet you my anme is George Lund ( known as Funkadelic Chicken) colourist artist and performance artist from Liverpool UK.
Just joined the Artreview to forge friendships, links and contacts with artists and organizations. This is a good way to share experience through art and dialogue. Hope you don't mind my comments. There is a great indivualised diversity from fine art to conceptualised art within your gallery and artists.
A broad spectrum of textures, techniques and styles and probably the artists have great characters that feed into their ideas and artwork. Keep the spirit and energy going. I would be honoured to have your comments on my artwork. website: www.lundart.co.uk Thank you.
Peace, success, happiness and health. Take care... regards to all from George

Ottinger Christoph said…
You are welcome to have a look at my works.Greetings from Germany.

Welcome to artreview.com - We hope you will enjoy the site!
Do also check out ArtReview Online http://www.artreviewdigital.com, where
you can read the current and back issues of ArtReview online. :)

We look forward to learning more about your gallery and seeing some examples of your work!