The Least Powerful People in the Art World

A few rules. 1. Make your character fictitious. If your description is based on a real person, please fictionalize it to honor the anonymity of the unimportant person. 2. Aim for about 200 words. 3 1/4. Please include an image of this person.

You need to be a member of The Least Powerful People in the Art World to add comments!

Just a little dry hiumour but  I think I may qualify  as one of the unimportants..should I send

HI, NICE TO BE PART OF THE GROUP I ENJOYED WHAT YOUVE WRITTIN VERY MUCH AND I AM WORKING ON A PIECE OF ART TO CONTRIBUT TO THE GROUP 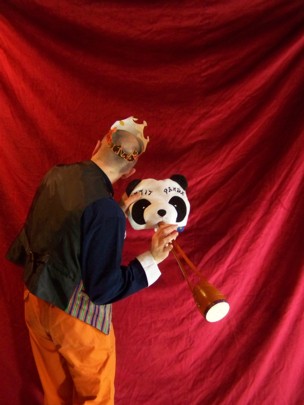 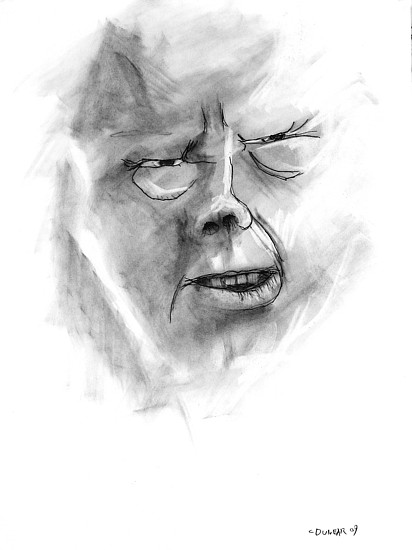 BORIS
Just Boris. No one knows his last name. No one is sure where Boris comes from. A few think he was born in the northeastern foothills of the Outer Eastern Carpathians Mountains near Pipirig. These few say the lead leaching into the drinking water there is the cause of Boris' behavior. A few others hypothesize he comes from farther east, a survivor from among Odessa's homeless children. Most folks are careful enough to avoid guessing anything at all about Boris.
His face is fat and a broken nose makes its unhappy home between two squinty eyes. His lower lip droops from a permanent scowl. What's left of his blond hair hangs in strings over his shirt collar. Boris is a thug. He would not hesitate to put his ham-sized fist or a 9mm bullet through any face. In the dark nether world of Europe's large cities, a creature with Boris's personality and skills are in demand. He is a prosperous subcontractor.
However, hidden deep somewhere in the mind that propels this brute is a green garden with a clear crystal stream. Boris has a - What can be said here? Interest, passion, obsession? He has an insatiable appetite for Paleolithic sculpture, late, middle or early. He is a persuasive and resourceful collector. Nothing, neither objecting archeologist nor fussy museum director, neither cement wall nor steel vault keeps Boris from his collecting. He particularly cherishes - as strange as that word may be - the fertility figures. “I only purloin them. I don‘t steal them,” he says. Among the ancient artifacts in the world’s great museums, nearly every one bears a smudged fragment of a Boris fingerprint. 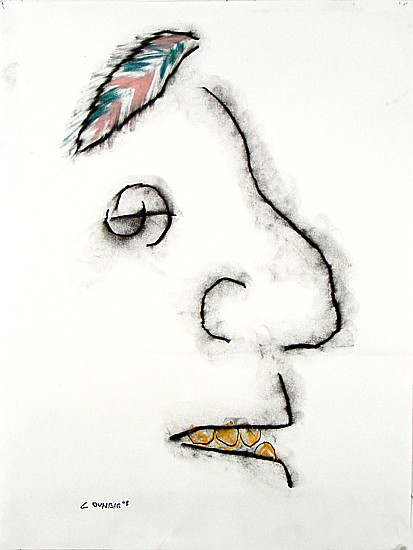 Jesus Garcia
Senor Jesus Garcia is director of the Central American Dashboard Ornament Association (América Central Salpicadero Ornamento Asociación, ACSOA,) attaining that post early in 2008. He has a long and distinguished career as a dashboard artist and as a dashboard art collector. He is known among dashboard ornament followers as "El Coleccionisto," the collector.
As a Bantam rooster fight promoter in Guatemala, the young Jesus first noticed the devotional objects found on the buses plying the mountain roads between towns in his native Guatemala. The ingenuity and creativity bus drivers showed in their dashboard displays inspired Senor Garcia to seek out master dashboardist, El Tallisto, in Puerto Barrios. A lengthy studio apprenticeship followed. His meteoric rise to artistic prominence astonished other dasboardists and dashboard art collectors from Laredo, Texas to Buenos Aires, Argentina. When El Tallisto died, the master's mantel fell on the shoulders of Jesus Garcia. The rest is history.
In an important essay in the Journal of the ACSOA, Senor Garcia affirmed his intention to maintain the rigor of a dashboard ornament creators’ education. Controversy swirls around his effort to introduce profane subject matter into Central American dashboard art. 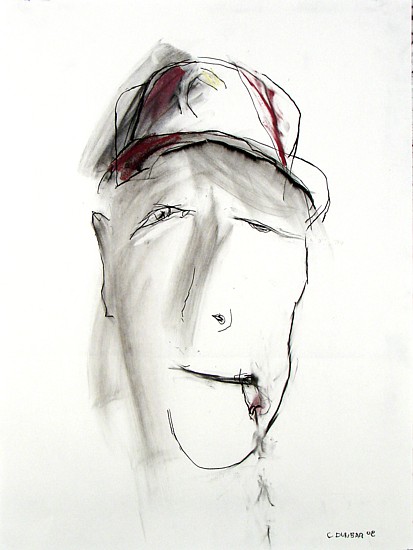 Vincent Duboscjeski
Vincent Dubscjeski has followed his passion as a dust collector for more than twenty years. He has spent most of that time as head janitor at the Mildred Paisley School for Girls in Balch Springs, Texas. He follows a complex sampling procedure to produce his “dirty” art. Daily, he takes samples from the floor sweepings of the girl’s restrooms. At the end of the week, he thoroughly mixes the daily floor sweeping samplings and takes a sampling from the mixture. In the school's boiler room, he has a large white painted Masonite panel, which he has divided into 4600 one-inch squares. He dusts the weekly sample onto a one-inch square, which he has first wet with his saliva. When this interviewer pointed out that Dubosjeski may not live another sixty years to finish his project, the maestro only grinned.
Little is known about Vincent Dubojescki's early dust collecting career, and he refuses to talk about the period in his life from 1984 to 1987. When pressed about this early period in his artistic formation, Dubascjeski only grinned. He claims Henry Darger, the solitary Chicago folk artist, as his inspiration.
Incidentally, Vincent Duboscjesky’s work may have scientific value as a unique DNA history of Mildred Paisley School for Girls. 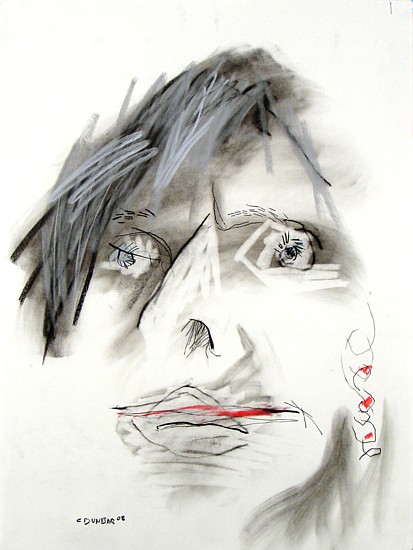 Martha Slain
Martha Slain began her artistic career as a cleaning woman for a now-defunct Indian owned chain of budget motels in the American Southwest. She began assembling discarded kitsch from motel rooms in 1956. In 1966 she moved to North Las Vegas, Nevada, where she gained employment cleaning rooms in the grand gaming palaces of Las Vegas. She stored her growing kitsch collection in a small building on her uncle’s junkyard a few short blocks from her home. With dedication and her artistic goal clearly in mind, Martha Slain saved every spare nickel, until she had the money for the down payment on an old Central Avenue motel in Albuquerque, New Mexico, whose owner went bankrupt in 1974. She installed her large, comprehensive kitsch collection in the motel rooms and outside the motel. In the same spirit as the monumental Dinner Party, which Judy Chicago was working on at the same time, Martha Slain enlisted the help of her long term motel tenants to create individual art pieces from her vast kitsch collection. The crowning centerpiece of this imaginative group effort is three mannequins arranged a la Rodin’s Gates of Hell on the roof facing Central Avenue. From them hang plastic leis and to either side prickly pear cactuses rise in bold oval forms from 1955 vintage Maytag wash tubs. Unlike Judy Chicago, Martha Slain received little notice for her lifetime achievement, except, perhaps, from the Albuquerque Health Department. Danny Johnson
The real art surprise this year is the emergence of young twelve-year-old Danny Johnson. Danny first made his enormous talent known in the Biennial Midwestern Pumpkin Carving Open in Kansas City. The young artist’s fresh take on an old genre startled the judges, among which was minimalist pumpkin carver, Chris Maloney. Chris predicts great things for Danny Johnson especially since pumpkin carving has expanded globally and includes other gourd types. From Kansas City Danny will next compete in the newly established Biennial Bushel Gourd Carving Contest in Lincoln, Nebraska.
The curators for next year’s Europeo Zucca Intaglio Concorso, to be held in the Italian boot heel seaside resort town of Monopoli in the Piazza Vittorio Emanuele, chose Danny to represent the United States. This is not the only foreign gourd carving recognition Danny has received. Rumor has it that Danny may appear in the China Quadrennial Master Gourd Carver Exhibition in Wuhan, Hubei. If true, Danny Johnson will be the youngest “master” to appear in that august exhibition in its eight centuries’ continued existence (except for the suspension of the exhibition during the reign of the Gang of Four.) Danny’s comment on all this attention? “Cool.” Sylvia Turtingas
Sylvia Turtingas, heir to the Turtingas Ticket fortune, has labored tirelessly on behalf of minor museums and obscure collections throughout the world. Her noble goal is insure the continuing existence of small, highly specialized collections like the House Key Collection in Lichtenau, Germany and the Wooden Thread Spool collection in Egmont Village, New Zealand She feels these kinds of collections are important contributors to global understanding and cooperation among the world’s people.
Her latest project is to find a permanent home for the Jacque Bourgeois Canadian Beer Pull Tab Collection. Sylvia Turtingas states that this collection is pivotally important in the development of the index finger in our species. Franklin Dread, retired archaeologist, supports her in this hypothesis. Sylvia Turtingas will attempt to unite this collection with the Nappa Wine Bottle Cork Collection now housed in a World War II Quonset hut near Heathrow Airport west of London, England.
For the time being Sylvia will be networking stylish balls in Calcutta, Indie, this social season seeking financial support for her many museum and collection projects. 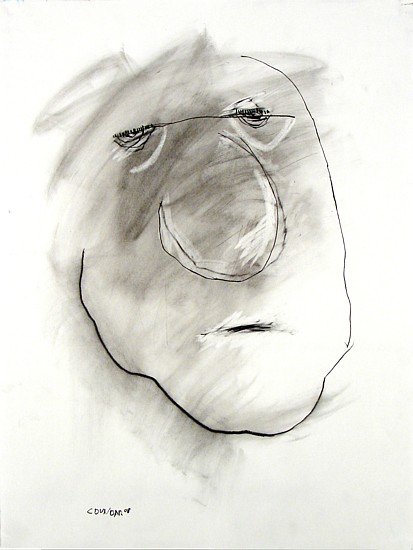 Damion Chitterwanabi
Recluse, Damion Chitterwanabi, is the world’s most important collector of carved student desktops. He follows in his father’s footstep. Inwambi Chitterwanabi started collecting carved student desktops from late 19th Century and early 20th Century Australian public schools. Damion Chitterwanabi took over his father’s collection when the elder Chitterwanabi died in a biplane race accident near Bishkek, Kyrgyzstan.
In the 1990’s Damion Chitterwanabi commissioned a Syrian architectural firm to create a large new museum in an undisclosed location to house The Memorial Chitterwanabi School Carved School Desktop Collection. Since then Damion has been an aggressive collector of carved school desktops. Just to mention a few of his recent collecting acitivities, he has added carved desktops from early 20th Century Kansas public schools, the towns of coastal Ukraine, the religious schools of Adan, Yemen, and private schools of urban Djakarta, Indonesia. He usually can be found fidgeting far to the rear of the crowds at the important antique auction houses. His prized carved desktop bears the deeply engraved name “Poncho Villa” from a school house near Durango, Durango, Mexico. (Some experts question the authenticity of this particular desktop.)