This group does not have any discussions yet.

You need to be a member of Spiritual and Religious Art to add comments!

ARTIST CALL!!!!!!!!
anyone wanting to exhibit with us at Showcase Cities on the 18th of april send me an email to blair@showcase-cites.com
for more info
www.showcase-cities.com
also like us on our fb page at
http://www.facebook.com/ShowcaseCities

With the Olympics almost here - London's Eastend has never been so vibrant and we expect our shows to get busier and busier :)  Exhibition spaces are very limited at the moment, however we've just had a space come available for our March 21st group exhibition, and we would like to give you priority - its a centrally located and beautifully lit (see attached) - would suit your work perfectly.

We suspect this spot will only be available for a short space of time - so get back to us as soon as possible if you would like to be part of the exhibition? - its going to be another good one ;) ... should you have any further questions about any aspect of how we run our shows, please do ask!

jan 2011, meanwhile my opinion on Alex Greys work has shifted towards psychedelic.I think the word spiritual does not apply.I now have more insight.It may be powerful, but also very unpleasant at times, especially on the 3rd eye,one feels an unnatural tension,and, NO LIGHT,NO PURITY.The images may be beautiful,with a pitchblack background, but I am searching for the sunflooded oceans of bliss, the ever ascending golden spiritual landscapes sri aurobindo describes..Communing with nature spirits is all very interesting but a very low level, if i understand Aurobindo correctly.

Shamanism failed miserably as the native americans, the mayans, etc. were overrun and slaughtered.And unless one has already extensive spiritual experience or is a lsd user or drugs of similar sorts, grey doesnt reach his ´´audience´´, it is just like preaching for his own parish.Fine. just leave me out of the loop.

grey wanted to convince me of something i already knew

I told him several times to stop but nothing happened until i mailed him.That is just not good enough for me.

His support for Wallstreet moneyprinters is just shocking.´´Never let Truth come in the way of salesnumbers...´´

grey wanted to convince me of something i already knew.

One shouldnt tamper with other people without their explicit permission.Suicides do happen.

I am not interested in being recruited into his ´´group soul´´, which is a totally irresponsible way of occult experiment with innocent seekers.

.
Grey with his occult power aquired through LSD, now projects his impurity (sexual, lower chakras) on nonsuspecting subjects who may be mightily impressed by his art and the sweet appearance of him and his wife.As was I.

Its not in the numbers, it is in the quality and purity that you influence evolution, life on earth.His view is very limited,so far, he seems to want to repair, fix, ´´fixate´´ life, thank God evolution goes about its own way.With him,there is no room for imperfection , and no understanding of the goal of evolution.Instead he repeats the same old mistakes of religion .Error is the gate through which Truth arrives.I try to show that in some of my work.

I admired his skill as a painter, but do not care for his worldview which is just a repetition of the same old mistakes of all kinds of religious movements.His violent action towards me only proves to me he is just another intolerant sectarian, despite all his rethoric about openness to all religions and movements.A simple comment by me, on Obama, was removed from his site.

''You are free to express your views ,as long as they are the same as mine'', seems to be the message.Dictatorship.

But then the movement I feel most comfortable with strives for a goal for earth which few understand, the full integration of soul and body, i.e. physical immortality, as Sri Aurobindo laid down in his teachings.

here´s a temple, pure and simple:

wonder why Grey never visited it...


Another, very disconcerting result of Greys invasion in me, (being initiated into his ´´groupsoul´´,was the loss of the Light that I had ,with careful discipline, begun to experience since a few months,, eyes wide open, the Transcendent,pure and beautiful.I suspect they ,he, stole it,tapped it, we call that psychic vampirism. .I inwardly asked Grey to stop, but he didnt,instead I got watered down versions of what was once a true and powerful light, sort of pretending he was the giver of that ''light''...well maybe he was, but I did not fall for it, an unexperienced seeker might have, as it is a clever,watered down copy of the real thing.

If I believed he could genuinely benefit from it instead of stealing it and use it for his own aggrandisement, i.e. if he did yoga, and werent so sexually impure, I would have helped him and his group.But his methods were clearly not benign..I want no part of his ''groupsoul'', as he calls it, a clever way of disguising egoistic motives ,draining others energy.

OCCULT RAPE, What he did to me is trying tro convince someone that sex is good,by raping the subject. ABSURD, incompetent.Especially when the subject already knows and experiences divine bliss without end or means,(which he tried to steal.).

The shamanic way (abuse of drugs) has proven inadequate-the mayans and native americans were overrun and slaughtered.

In this respect it may be of interest to the reader that Sri Aurobindo declared war on the British occupiers of his homeland India,1904, and later yielded his Divine power against the axis powers (hitler and japan) and that the official end of ww2 was on his 73rd birthday, and the official declaration of independence of India, on his 75 birthday.(15 aug 1947)....

anyone who has seriously studied the work of Aurobindo knows this is not a coincidence.

He was not into rituals, though his companion, The Mother, was extensively trained in the occult, before they left all that behind them as inadequate.

Grey promotes sex, but sex is an unnesecessary habit,a great hindrance even, if you go for physical immortality.Nothing to do with being prudish or morals, just very impractical.If you want to learn how to fly, you have to stop walking.Keep indulging and you'll never reach the power that has the possibility of physical transformation.But ,as I said, Grey HAS no vision of the future, other than ''fixing'' the present.That's been tried for 6000 years and we are on the brink of extinction.

what about amfibians?well...tring to become immortal through sex is like learning to live on light while you keep eating.Or like climbing a mountain backwards,feet first.If your aim is getting to the top it is just very impractical.Besides, sexual orgasm and divine bliss are just incomparable..It is a very impopular view, but sex was invented to procreate...the human race can do very well without me or other spiritual adventurers for its continuation, it has proven that abundantly.


every person,and child now born on the planet has a debt of 180.000 dollars,due to american momeyprinting and some other states with big debts

I learned from this Grey business that apparently one can be CC at some level(crown chakra, forehead chakra), and still be subject to the lower impure influences, distorting what was initially a pure and free vision.I used to think that once one was CC, one would be no longer subject to the pitfalls of ego, but apparently, if attained with the use of drugs at least, one can still abuse one's power.

Aliens who can travel through space/time are not necessarily benign, they too may have drugs, or may have genetically manipulated themselves or others.

a quote from aurobindo on this type of man

His sacrifice may be performed outwardly according to the Shastra, (holy law,scriptures.n)but its motive is ostentation, pride or a strong lust after the fruit of his action, a vehement demand for the reward of his works. All work therefore that proceeds from violent or egoistic personal desire or from an arrogant will intent to impose itself on the world for personal objects is of the rajasic nature, even if it masks itself with the insignia of the light, even if it be done outwardly as a sacrifice. Although it is ostensibly given to God or to the gods, it remains essentially an Asuric (evil,n.) action. It is the inner state, motive and direction which give their value to our works, and not merely the apparent outer direction, the divine names we may call to sanction them or even the sincere intellectual belief which seems to justify us in the performance.

Alex´s motive is to convince others.Such was my motive, but for spiritual progress all worldly ambition has to go.All is just service to the Divine.I am not convinced at all that Grey belongs to that category.I wish he did. 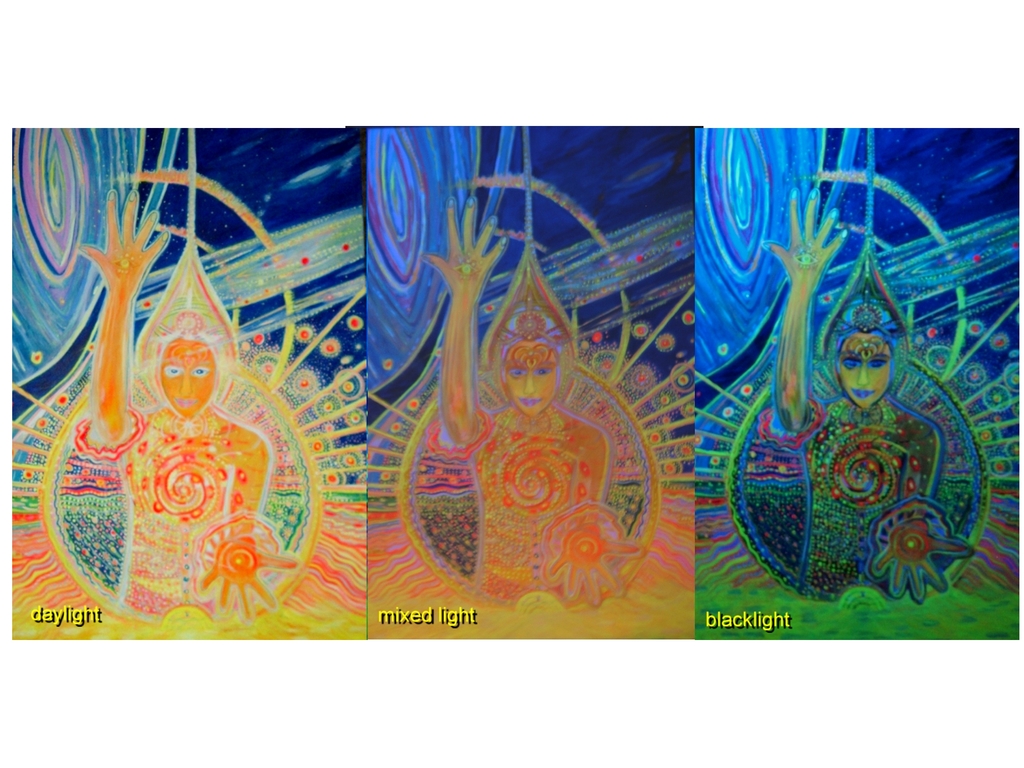 3x the same painting,in different lighting.Note the difference between the eyes in day and blacklight.I painted the blacklight part unknowingly,as I did 4 sessions in daylight, using UV colors.When i switched on the UV lamp,it was a big surprise, it shows a much deeper level of the girls personality.Magic...another proof that the best art arrives when the artists ego is not in the way..The mixed light shows resemblance to colors you see when using the 3rd eye,notably the blue-whitish lines...I found the photo (model) on the internet.she gave permission for me to use the pose, i tried to respect her compository edits on it..it looks a bit skewed here,its better on my page...

Comment by Mirko Sevic on November 30, 2010 at 19:43
I am proud, I received an invitation to attend the eighth International Biennale of Contemporary Art in Florence, Italy.
Biennial will be held from 12/3/2011 d012/11/2011, in the historical Fortezza da Basso in Florence.
www.florencebiennale.org 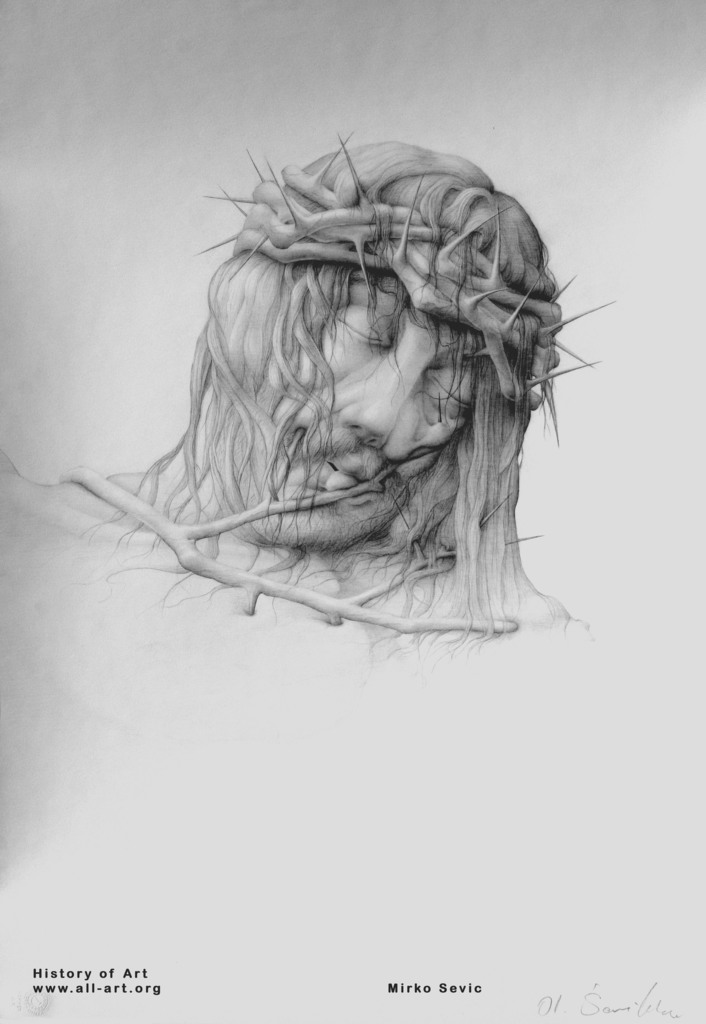 I help run a monthly exhibition called showcase
check out http://www.showcase-london.com/
We had been at cafe 1001 for over a year and we are now at the rich mix on bethnal green road in London its a great space and we have some great artists, but are always looking to expand and get new work in.
the next show is the 27th of oct, its a one night exhibition if your interested in it send me a email, also i wonder some people were interested in doing some live art or drawing for this? We are also looking to have some performances, whether art based or otherwise and live bands, nothing too overbearing light jazzy/jam type stuff, something that doesnt interrupt all the arty peoples chatter, the idea is to keep the people entertained!

send me an email or message if your interested
blair@showcase-london.com 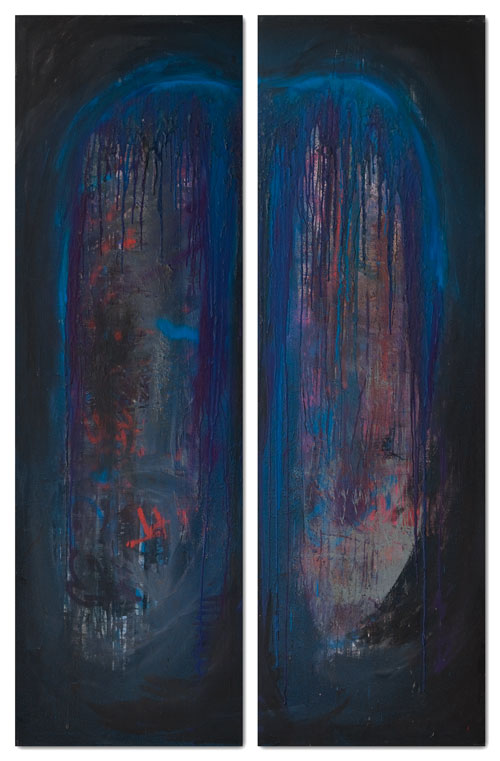 Dripped Window 1520x2440mm (each panel is 760x2440mm) Mixed Media, 2010
Vote for me in the Saatchi Gallery Online Showdown and i will be eternally grateful.
http://www.saatchi-gallery.co.uk/showdown/index.php?showpic=287634
goto the link and then
Click on a star to register your vote or choose another artwork
click on the last star on the right to give me 10 stars
Hope I can return the favour :) 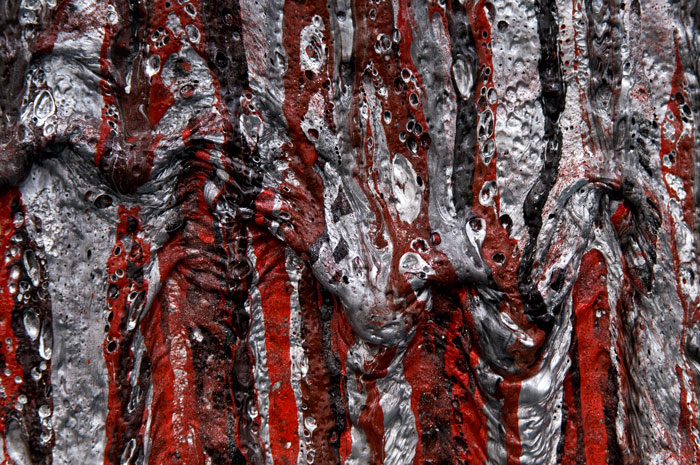 www.blairzaye.com
My name is Blair Zaye I am an artist from New Zealand, with a Bachelor of Visual Arts.
I have just finished creating and uploading to my brand new website www.blairzaye.com
Here you can keep up to date with my latest work, my upcoming exhibitions and get in contact with me.

I am now looking for exposure, representation, an agent, dealers, exhibitions,
residencies and to collaborate with others artists.

My website showcases (amongst others) my latest series of work

'DRIPS, SPLITS, TEARS AND RIPS' (click for a direct link)

professionalism and my current practice,so have a look and see if you feel the same.

I look forward to hearing from you and your opinion of my work.

If you require anything else please do not hesitate to ask.