The Postal-Collage Project No. 1 is the inaugural endeavor of Round Table [Collaboration].

The project involves fifty collaborators assembled in ten groups, ranging in age from 4 to 82, hailing from the USA, Ireland, the UK, Denmark, France, Germany, and Australia. It began in September 2011, and in February 2012, the completed collages will be exhibited in Berkeley, California.

There are two international groups, while eight are USA only; four of these are limited to California. Three groups are made up of children.

The map below shows the traveling pattern of collages-in-progress as they are mailed around the globe by one of the two international groups, an Internet-based group of collaborators working under the name, Praxis.

Yes Marty by all means...put the ashes and documentation up for sale but don't hold your breath. We could even issue A Certificate of Authenticity with the ashes. Or should we burn that too?

This really is how to look real smart and still shoot yourself in the foot. Something I've been doing a lot of lately.

GREAT COW !!! Whose is it? Which genius put it into the collage? I have a white cow too and its looking kinda lonesome right now.

I think you're right Kevin, if someone would like to purchase a piece, they can take delivery of it after the Ramon's Tailor show.

As far as the local market pricing is concerned, Dan, I do have an idea of a reasonable regional range, but I suppose I'd like to hear from everyone- a figure below which a sale would be disappointing.

Maybe I can sell your ashes by the spoonful, Mike, by the gram... By the way, I wouldn't worry about looking real smart with that banana in your mouth! Jajajaja!

Regarding the envelope mosaic, I want to tell you all that when I stood back and looked at this collection, I was overcome with gratitude for all of your efforts. It's really something! This project means a lot to me, and I can't thank you enough for the energy and spirit that you all put into it (not to mention the time and money!).

Some of my previous comments refer to a conversation elsewhere- sorry about that! Too many simultaneous discussions!

Marty, what is the 'reasonable regional range' ?

I ask 'cos selling art too cheap has been the bane of my art-life.  I know I know, we've got to sell etc., we've got to go in the real world and art to the market place is product just like jeans . . . so what is the objective here : To recoup costs, or sell at any price and value the work to the audiences' pocket book,  or to value the works as something quite special?  (which is what I see we've produced here as groups under Marty's ringcraft)

Splendid! I cut a lot of the envelopes up!

Ephemeral Peripheral- a mosaic of project envelopes, in progress 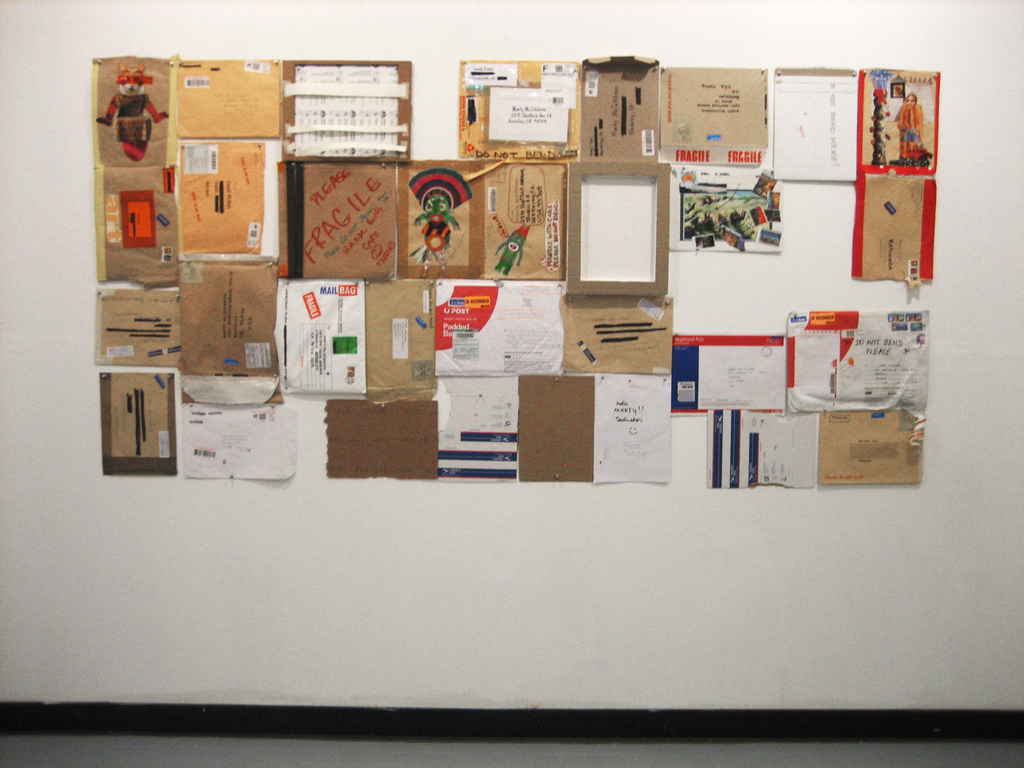 The exhibition reception went very well on Saturday evening, with 60-80 people in attendance, all full of praise and having fun. I got several collages on Saturday morning, just as soon as I had accepted the likelihood that they would not arrive. The last to arrive was Mike's Paint It Black and Burn It.

super great video ,  Mike you arrive save to the exhibition !

The exhibition reception went very well on Saturday evening, with 60-80 people in attendance, all full of praise and having fun. I got several collages on Saturday morning, just as soon as I had accepted the likelihood that they would not arrive. The last to arrive was Mike's Paint It Black and Burn It.

Pleased that they made it Mike!

This just keeps getting more and more interesting...

I so wish I could have been there it lokks like there was plenty of interest!

Does that mean Mike would be late for his own funeral??