Wayne Lloyd’s spoken-word performances recount the plots of well-known films and combine drawing, painting, photography and occasionally dance to produce a didactic retelling of the narrative. Previous works include Last Tango in Paris and A Clockwork Orange.

There is often a residual exhibition, and so it is here, at Kynastonmcshine, where he takes on Blow-Up. Lloyd knows that we’ve all seen Michelangelo Antonioni’s 1966 classic, and his masterstroke is to act like we haven’t. He affects a confidential air, bringing fresh news of what we already know, his camp charisma handily reminiscent of David Bailey, the template for the film’s central character. Though faithful to the original plot, Lloyd is at his best when straying from synopsis into skittish analysis. He’s a halting but voluble cineaste, pausing to raise an eyebrow at the countercultural underbelly of ‘Swinging London’. A good storyteller must have one foot in the elsewhere of his story and another in the present. Lloyd’s vivid description places us on the various locations of Blow-Up while acknowledging the cultural distance between then and now. Were it not a retelling, this might come across as lofty, but thanks to the narrative detail and comic timing, the viewpoint is more that of a stunned witness than a patronising critic. Where the critic often feigns familiarity with his subject, the standup must feign surprise. The standup element to Lloyd’s performance is seductive, but the work has higher ambitions: to materially ground the cinematic elsewhere of Blow-Upin the here and now of the gallery. On a plinth, a bunch of cameras await deployment, and behind the audience several women stand by to be photographed. Every so often, the artist wanders into our midst, snapping away at these women. The photographs are immediately printed, blown up and hung on the rear wall. The subjects of the photographs also serve as Lloyd’s technical assistants, printing and displaying them as he speaks – an activity that is meant to evoke the bustle of a 1960s photography studio. The blowups, in their varying degrees of magnification, echo the images that Thomas (played by David Hemmings) makes in the original film to determine whether that really was a corpse in the undergrowth, or a drug-induced hallucination. 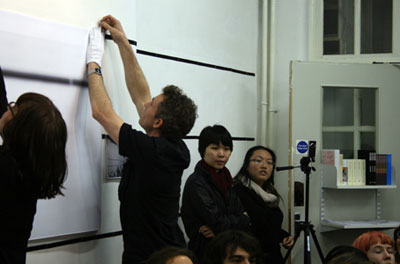 As a document of a live work, the photographs are clearly a vital component, but the hectic logistics of their production – the fetching and carrying of prints, the constant whir of the Hewlett-Packard – feels extraneous to its dramaturgy. The assistants are meant to be part of its artistic character, but they read as functional gofers, their actions procedural rather than integral. When, in its early days, performance art was seen as a temporal extension of sculpture, such procedural approaches served to distance it from theatre, but when – as here – it engages with the conventions of standup or cabaret, one might expect less arbitrary measures.

The question of when an assistant becomes a model, or a stagehand a performer, deserves greater consideration – especially given that Lloyd himself is a consummate impresario. Historically, performance art is resistant to dramaturgical readings, but the growing number of artists who appropriate theatrical tropes are testing that resistance. Their experiments should be seen not as the conservative relapse of an initially renegade artform, but as a reappraisal of its spatial mechanisms. In Lloyd’s case, the simpler those mechanisms, the better.

Wayne Lloyd: Blow Up is at Kynastonmcshine, London to 23 March.