Raymond Pettibon: Here's Your Irony Back (The Big Picture)

Raymond Pettibon is a product of Los Angeles's pop-culture mythology, making a career of dredging its history and salvaging the remains of sentimental mid-century Norman Rockwell clichés only to tarnish them. Unlike similar LA artist Ed Ruscha, Pettibon's work is not elegant. He prefers to translate the crisp, delineated aesthetic of graphic novels into expressive, more immediate figuration. Once employed as an artist for his brother’s outfit Black Flag, using dark punk rock influences to subvert gee-whiz Americana fetishism, Pettibon humorously contrasts countercultural and mainstream 'heroes' with paraphrased text from overtly highbrow sources, among them Proust and St Augustine. Morsels of winking allusions are left for the picking.

For this exhibition, monumental one-liners crawl across the walls and divide the gallery into sections. One reads 'Israel is mortal', another says 'Two cheers for the red white and blue'. The irony of these phrases is trite and expected, taking away from the nuance of the illustrations on paper that are clustered salon-style beneath and around the text.

The illustrations are the real highlight of the exhibition. Detailed figures hyperactively overlap and crowd. Paraphrased text cascades around the scenes, utilising any untouched surface. Illustrated in dark shades of blue and black, a crowd of hooded figures surrounding a burning cross forms the drawing No Title (We Have Applied…) (all works 2007). A concise paragraph in the top left corner reads, 'We have applied it ourselves to the current problems of American society. We have endeavored to light up with it the American sky.'

The adjoining illustration, No Title (10 Minutes of…), tackles torture as a form of power fetish. It is adorned with variously interspersed graphic pen and ink depictions; a flaccid penis is accompanied by the caption 'What a shock to see them circumcised! We thought we'd gotten the wrong ones'; a man sucks the nipple of a hooded prisoner; two gentlemen simultaneously perform fellatio on each other; a quotation details the need to 'take things into their own hands'. A Byzantine Christ figure hovers to the right, barely a sketch, underlining the hypocrisy of a nation both zealously Christian yet flagrantly immoral. Who is the monster now?

Some critics will certainly contend that these inflaming images merely preach to the choir. While it is true that there is little likelihood that a bus of Southern Baptists will unload its homosexual-fearing passengers at the gates of David Zwirner, Pettibon's drawings offer much for the liberal spectator to ingest. Rarely contrived, Pettibon wins at crafting blatantly political work that is unsettling, regardless of audience. 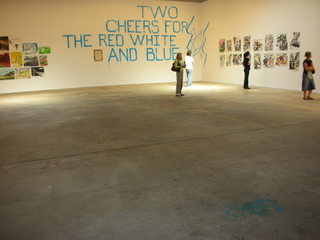 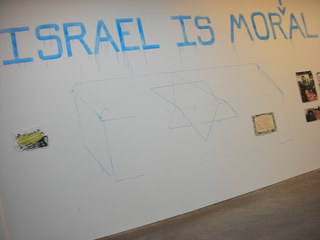 (no southern baptists walking in, I'm afraid, although it might had made it more interesting if they did)