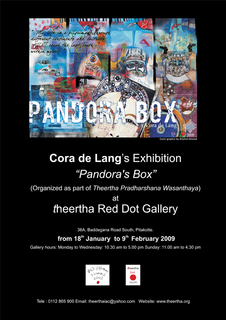 Cora de Lang has a way of weaving stories within her art incorporating memories, experiences, and pangs of nostalgia creating a visual text that oscillate between reality and the dream world. The labyrinth of scenes made with clusters of images within one painting, sometimes intertwined without full stops or clear progression from one to the other, challenges the viewer to venture deep into the pictorial language of each art work, and crack the code that would unveil the whole story. On the first glance, de Lang’s work can be seen as beautiful tapestries of images that offer an exoticized iconic representation of artifacts and ritual art from Africa, South America and Australasia, referring to continents but not really pinpointing to an exact geographic location or referring to one particular historical/cultural genealogy. They remind me of stories by Isabel Allende and Gabriel Garcia Marquez and their version of storytelling in the genre of magic realism where the mundane is mingled with the fantastic, where readers constantly cross from one altered state of consciousness to another, and imagination is portrayed as real, vividly and phenomenally. If de Lang narrates simple stories in her work, then she does so with a kind of playful complexity where boundaries of myths, fantasies, dreams and reality are never intended to be clear.

For her series of works titled Flight Bags and the Unexpected, de Lang has used air-sickness disposal bags appropriated from a variety of airlines as art material. She contextualizes this series of works in the following words: “If you are a passenger on any flight you'll find them in front of you close to the flight magazine. Uniform and unattractive. To be used in emergency cases, to cover up the expectoration - just in case. The case is tending towards nil nowadays: the bags, however, are there and often their only adornment is the name of the airline. This was intriguing for me… I'm looking into “neglected” items of our everyday life, pull them out of their corners and cohesion and re-arrange them into an art environment inspired by nature and projected into a new art space contextualizing the created art installation with its former environment, with creative processes, with a suggested sustainability formed and guarded by the artist”[1].

We try to decipher the world through ‘referring’ and ‘counter referring’, understanding that everything exists within a maze of histories. In this context, Franz Roh gives us a point of reference through his articulation of Magic Realism that would allow us to understand and locate de Lang’s work in a historical trajectory and connect it to an artistic lineage: “We recognize the world, although now--not only because we have emerged from a dream--we look on it with new eyes. We are offered a new style that is thoroughly of this world that celebrates the mundane. This new world of objects is still alien to the current idea of Realism. It employs various techniques that endow all things with a deeper meaning and reveal mysteries that always threaten the secure tranquility of simple and ingenuous things.”[2]

De Lang’s personal history is irrevocably bound with her work: growing up in the background of a political dictatorship and amidst Beatle mania, electric guitars and imagining of a world without boundaries, the woman from Argentina who has nurtured roots in Germany, a frequent flyer within and between continents, living with a notion of impermanence in other people’s countries and cultures. This is the reality of de Lang’s life; this is the topography of her work. All these factual markers let us process our perceptions of de Lang’s work allowing us to read them within a broad canvas. They also make her intensely cosmopolitan in her ideological approach to life and art. The conception of cosmopolitanism seen in her work ‘brings a self reflexive openness to cultural difference and …experiences ‘multiple citizenships’ [3], a notion of being a citizen of the world which opens up a universe of multiple cultural landscapes where her appropriations, inclusions, fusions and inlays of cultural iconography somehow seems more legitimate and more ethical. This also makes personal and artistic sense as de Lang relays a highly iconographic and somewhat autobiographic narrative referring to places and events from her life, carrying memories and placing them in the backdrop of this nomadic universe of the cosmopolitan. They are personalized real time events relayed in a Dream Time[4] story format. De Lang elaborates this state of affairs further: “As a modern nomad, I’ve been travelling in all directions with plenty of airlines and have collected these bags (given by airlines to be used in case of air sickness) one by one together with the stories told by my neighbours which provides an even closer relationship to each of my bags on display covering an entire wall. I have normally integrated the airlines name – already printed on the bag – into the created new artistic space.” [5]

In many ways, de Lang’s work and art practice questions the ‘authenticity notions’ of art based on geographic and cultural exclusivity. An interesting observation by Dele Jedede of de Lang’s work needs to be stated here: “Cora de Lang is a migrant spirit whose work raises fundamental questions about proprietary claims. Is contemporary African art person- or content – driven? Can you claim to be an African artist simply because you have African ancestry? Or can you sustain such a claim through your work, and not by accident of birth? Cora de Lang’s work supports this last claim.”[6] As an artist who was born in Argentina and lived in Germany, Spain, India, Nigeria, Mexico and Sri Lanka for extended periods of time, and with her particular interest in the ‘discarded, throw-a-ways and the waste material’ found in varied environments she happens to live in, her work tend to act like a prism of cultural hybridism reflecting glimpses of cultural eclecticism. This further reiterates her identity as a cosmopolitan. While her short transient episodes in each place do not give her an opportunity for long term or life time intense engagement in their social and historical evolution, her emotional attachments, relative rootedness and celebration of each cultural landscape are memorialised and maintained in memory. They become part of her cosmopolitan vocabulary manifested in her whole existence and remains as layers in her art surfacing at different moments. While this allows a constant presence of these varied cultural iconographies in her work, this also have a tendency to disconnect them from the original struggles and anxieties they represent in the home cultures they belong to and be part of a larger and more flexible landscape whose boundaries remain undefined. They address us as vivid elements of a transnational visual language. A certain kind of universality prevails in this artistic eclecticism as a way of maintaining neutrality and reconciling a cosmopolitan and nomadic identity on its own terms.

Her series of works titled, Pandora’s Box cannot distance itself from the ideas of women as keepers of memory. The works use a series of boxes made by de Lang’s father’s packaging factory in Argentina. These boxes turned into little storage chests where nostalgic memories, personal tit bits and secret desire rest. Each box invokes a particular memory and desire of the artist, a desire to remember and record through the transformation of a simple box into a unique time capsule. This series of works creatively and sensitively presents the dilemma of the nomad who is caught between the desire for rootedness and the demands of transiency. One wonders if the artist’s purpose in Pandora’s Box is to tell us that the only thing permanent in such a predicament are the memories and the nostalgia that one harbours. Is the Pandora’s Box a wrapping for memorialising of such memories? The following words by de Lang places these queries as well as much of her artistic quest in context:

“…I myself grew up in the world of boxes and cardboards.

My grandfather had set up a factory of pliable packages;

My father took over. And some wrapping material, cardboards

and boxes became part of my life – my first “canvases”,

my playground for drawings and paintings.

A reminder for me are the three “B”s:

They have accompanied my life, have been my

confidants, my solace, my enticement, my playmates,

my inspiration and my creative projection…”[7]

[4] ‘The Dream Time’ refers to stories articulating the origin myths of Australian aborigines and their own mythical universe.

Replies are closed for this discussion.