In the UK release of 'Antichrist', signs that film is coming of age

Censorship and moral uproar in response to onscreen violence, nudity and sexual imagery has a long and predictable history. Could there be an argument, however, that we have entered the endgame, now that film director Lars von Trier’s latest offering has been allowed onto our screens, edit-free, by the British Board of Film Classification? 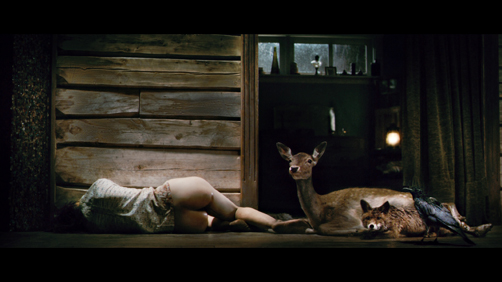 For the first 40 minutes of Antichrist, released in the UK on 24 July, there is very little that is shocking per se. The opening sequence is shot in such an ‘artful’, monochrome aesthetic that the viewer is left wondering whether this perfume advertisement could really be the work of the Dogme 95 director. Bill Viola at his most indulgent, perhaps, but not von Trier. The drama’s catalyst comes when, during a bout of (admittedly pretty-real-looking) sex between a couple played by Willem Dafoe and Charlotte Gainsbourg, a young boy – their unattended son – falls to his death from a first floor window. The unfolding drama of the funeral, the woman’s grief and her partner’s methodical attempts to get her through it, is flipped back into a stylised realism, a swaying camera mirroring the delirium of grief. The controversy lies in the film’s second half, for here – and without giving too much away – the audience is lured into a world of nightmarish horror psychology that manifests itself in graphic vaginal self-mutilation and other instances of explicit, wince-inducing violence, angry sex, erect, blood-spurting cocks and woodland orgies. And it’s all wrapped up in what looks like a terrifying misogyny. It is a film that, despite occasionally risking becoming a pastiche of itself, leaves one shaken. 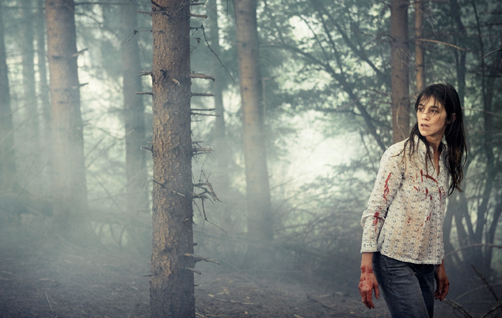 This catalogue of extreme imagery is nothing new to a contemporary art audience, however. The violence of Antichrist is comparable to that in John Bock’s or Paul McCarthy’s work. Historically, art has been allowed to go further. Even, for example, as Wes Craven’s horror flick The Last House on the Left (1972) was banned in the UK, the Viennese Actionists were pissing and shitting on each other in Austrian performances. Admittedly the Viennese Actionists were prosecuted at the time, but they have since largely been accepted as important and respected fine artists. The Last House on the Left, on the other hand, was repeatedly submitted for classification in the UK, and repeatedly turned down, only finally getting a certificate in 2002. Filmmakers are routinely asked to make cuts so that their films can gain the lower, more commercially viable age-restriction certificates. Normally a polite warning notice will suffice at exhibitions, as evidenced in the Hayward’s current installation of Jason Rhoades’s The Creation Myth (1998), which contains a couple of porn videos among its many sculptural elements. There is no legal obligation to do this, and although such signs may state that the work is unsuitable for children, it seems unlikely that under-18s would be challenged on entry, such decisions left instead to an accompanying adult. A friend of mine had no problem walking into Martin Creed’s 2007 show at Hauser & Wirth’s old Coppermill site with her young nephew, for instance, though the gallery assistant on the door was presumably aware the exhibition contained Work No. 730, black and white 35mm film transferred to DVD (2007), a huge projection depicting a slowed-down close-up of sexual organs in the act of doing what they do naturally.

There have of course been instances of artists and curators feeling the law’s moral wrath, most recently in the case against Henry-Claude Cousseau, director of the School of Beaux-Arts of Paris and formerly of Bordeaux museums, curator Marie-Laure Bernadac, who now works at the Louvre, and curator Stéphanie Moisdon, now an art critic. The controversy centres on the exhibition Presumed Innocent: Contemporary Art and Childhood, featuring work by artists including Cindy Sherman and Nan Goldin, held at the Centre d’Art Plastique Contemporain in Bordeaux in 2000. Following an original prosecution attempt nine years ago, the three are facing reopened charges of distributing pornographic images of a minor. Goldin’s work also got the Baltic in Newcastle in trouble with the law in 2007; no charges were brought, but the publicity resulted in the lender withdrawing his loans. And then there was the 2002 case in which gallerist Fred Mann (now of Fred Gallery, then of Rhodes + Mann) was splashed across the press for an exhibition that included artist Annelies Strba's nude bathing shots of her daughter. More media furore last year erupted over Australian artist Bill Henson’s show at Roslyn Oxley9 Gallery in Sydney, which also involved pictures of children, but again ended with no charges or censorship.

These cases remain relatively rare in art; in fact, the only time galleries seem to attract this unwanted attention is specifically when child nudity is involved. Yet every film director has to reckon not only with the censor but also the commercial self-censor. So could Antichrist, left alone by the censor’s scissors, mark some kind of final coming of age for film? A fall from innocence, to be poetic?

Antichrist is released in the UK on 24 July, by Curzon

Permalink Reply by John Greenland on July 13, 2009 at 22:38
A pile of shit is shocking (or was once) and anything that shocks has to be worthy of being called Art, right?
How can real artists (I mean real versus fraud) compete when all they can offer is skill, talent honed by experience with composition, color, line, edge etc., and something to say that doesn't depend on shock or revulsion?
Leonardo and his simpleton derivative ilk would be justly banned from our more sophisticated audience, eh? We left them behind long ago.
Thank God for our evolved and enlightened post-everything society that worships celebrity without accomplishment.
Yeah, I know - and I call myself an artist??!!

Permalink Reply by Matt on July 20, 2009 at 15:28
Willem Dafoe's a$$ always seems to get put on display in all the movies he's in. But I can understand that, he has a nice a$$ (even if this is coming from a str8 guy). Besides, we can all tell who will be the primary viewer of this film: women. This film has all the earmarks of a horror-film-made-for-women. First, there is the a$$ shots of Willem Defoe. Second, there is the sex scenes-mixed-with-violence-and-horror. [I don't know ANY man who likes these kinds of scenes in horror films. Male horror film viewers like raw fear and blood & gore. I know of no men who like the sex + violence motif. I do know female horror film fans who do, though.] Then, there is the 1-on-1 nature of the relationship theme rather than the group-of-people-getting-killed-one-by-one thing that typifies most horror films and appeals mostly to male viewers. There is also the fact that the primary source of horror comes from the two characters inflicting it on each other. Definitely a female-appealing theme since it is relationship-centered more than situationally-centered. There is also the fact the couple is married. Slasher-killer horror films made for general audiences do not have married couples or if they do, they are among several such couples. In any case male viewers don't care about married couples being in the films and probably prefer they not be. Male horror film viewers are usually single and like it that way and don't really want to see married couples on film, since marriage is so... not them. Finally, the P/R around it is "gynocentric".
Take a look: http://www.guardian.co.uk/film/2009/jul/16/antichrist-lars-von-trie...
You don't see other horror movies getting reviewed by a whole spate of feminists, do you? And these reviews are far from condemning. In fact they are practically one ad after another for it.

My analysis here is that the director/author had a stroke of marketing genius as well as inspiration, whether it arose from a serious bout of depression or not. This looks very much like it was made for a female audience characterized by women who like the horror genre (but don't want to admit it), and/or who like to watch situations that demonize men while seeing women in powerful but vulnerable (ie, victim) positions. It's perfect. "Antichrist" (with the 't' in the form of a female-sex symbol) is a postmodernpostfeministwymynswetdream-- literally. It will make tons of money and probably cost very little to make. This guy will retire on it.

Permalink Reply by John Greenland on July 20, 2009 at 15:54
I think you're right on the money here. It has all the hallmarks of filthy lucre using the art card to gain entry into the respectable lobby. That's what I hate the most about it and things like it - they push the more intelligent, discerning public away from the arts and open the door to every and any hack with a marketing plan.
Freakin' genius? Maybe. Freakin' fraud - definitely.