“Welcome to the Casino!” the South American collector bellowed as he slapped ArtReview on the back. “The lights are on, the sunlight is blocked out, all the chips are on the table and the wheels are spinning.” And before ArtReview had time to pick itself up off the Art Basel Miami Beach steps and splutteringly tell the collector how impressive it was that he managed to hold down a job working nights as a doorman at the ‘establishment’ ArtReview had been gracing with its ‘custom’ earlier that morning and be first (behind ArtReview, of course) at the fair, the collector had bounded off past security and into the virgin halls.

The point is that ArtReview is something of a guru to collectors attending these events. Indeed, it had only just made it past the security guard (who studied its entry pass for several suspicion-laden minutes before finally agreeing that humans are indeed capable of growing beards) when a European collector slipped her arm into ArtReview’s and lovingly barked into its ear, “So! What are the five best things in here?” But before ArtReview had managed to recover its senses and explain that perhaps one metre past the entrance was a bit too soon to make such pronouncements, she too had sashayed off somewhere else. Art fairs! People always see something better on the next booth. But now that ArtReview has had approximately 45 minutes to take in the fair, everyone can get ahold of its very early top tips. Democracy – that’s what ArtReview’s all about.

ONE
Peter Liversidge, & (2012) at Sean Kelly
Liversidge is all about cause and effect. Typical of this is &, which consists of a typewritten proposal for a work to be created on Sean Kelly’s Miami booth, plus the realised work itself – a luminous ampersand made up of a double string of screw-in lightbulbs. After a long, hard night on the caipirinhas, there is something uplifting about the artist’s optimistic expectation that his intention will somehow transform itself into action. Sadly that never happens to ArtReview. 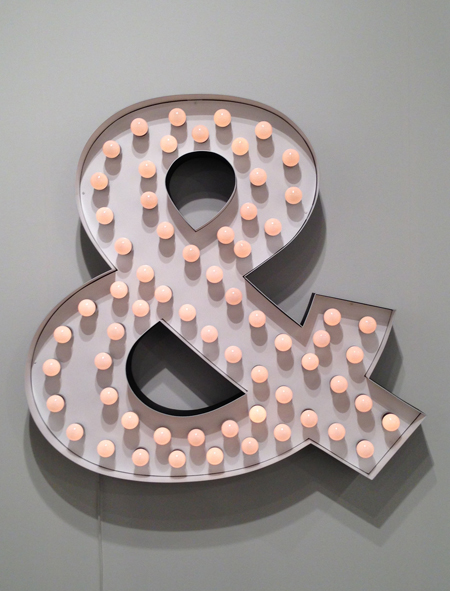 TWO
Banks Violette, Untitled (Stage with Salt Casts) (2007/12) at Team Gallery
Splattered across a black stage are the bleached remains of speaker components and traces of salt, a work containing enough references to ill-remembered indulgencies and the last night of Sodom to satisfy even the two ‘art critics’ ArtReview saw heading straight to the fair’s vernissage from an all-nighter at Miami Beach’s ever-popular Deuce Bar. But more than that, this work is, as one of ArtReview’s friends is fond of saying, simply a damn good sculpture. 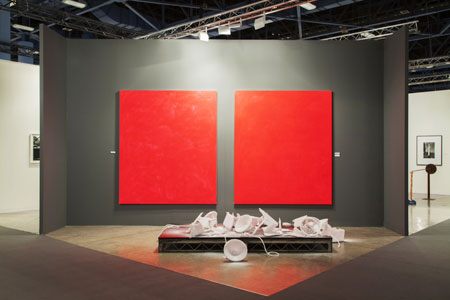 THREE
KRIWET, Campaign Tableau (1972/2007) at BQ
As far as ArtReview is concerned, Dresden-based multimedia artist Ferdinand Kriwet is one of the most forward-thinking (via investigations of the intermingling of media, politics and commerce begun during the 1960s) and underrated artists of his generation. Campaign Tableau, comprising multiple images photographed off the television on a visit to the US during the 1972 presidential elections, opens up comparisons between humankind’s exploration of outer space and its simultaneous transformation of its immediate surroundings into a commercialised media space. Pop with depth.

FOUR
Jon Pylypchuk, I Won’t Give Up on You (2012) at Fredric Snitzer Gallery

'Y’all can suck my balls.' No, that’s not ArtReview talking. It’s written on one of the placards carried by a bunch of protesting cigarette butts at Fredric Snitzer’s stand. No, ArtReview is not still on ‘the sauce’. ArtReview is just reading stuff out. Honestly! What ArtReview is drawing your attention to is the fact that Pylypchuk’s installation humorously yet disturbingly cuts through (Jerry Springerised) society at large (other slogans include, ‘I want a million dollars and a divorce’ and ‘My husband’s a pussy’). No one loves cigarettes more than ArtReview, but after this it’s really weighing up whether they’re more trouble than they’re worth. Oh… er… by the way… if you really did want to suck them, ArtReview’s staying at the South Seas… 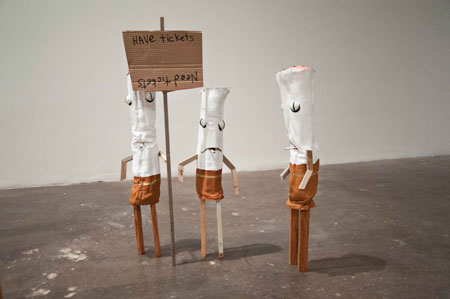