Ryan Mosley, at 28, is a young upstart of painting, creating scenes that cross cultures whilst seemingly telling some specific tale. Such connotations of narrative, depicted in assemblages of basic form and shape, belie a heavy, tightly handled brushwork that pays debt to the medium’s material and history, simultaneously inverting normal modes of perspective. Here, Moseley takes ArtReview on a tour of his current solo exhibition at Alison Jacques, London. 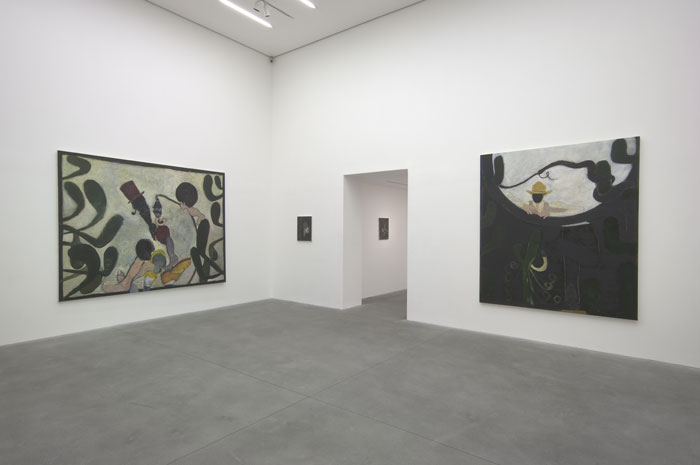 AR: In your work the viewer is commonly presented with a scene that seems almost literary in its composition, but is this to say the work is subject led? Is there some great narrative, which one should know, to the scene – or is it a much more painterly, aesthetic process?

RM: I suppose it’s a bit of both. Whilst working on this show I became very aware that my previous subject was just figures in space. I was really interested in that idea initially, but I grew too comfortable doing those, it became too easy to solve them. I used to make quite a lot of drawings prior to starting on a work, 10 – 15 sketches which I worked and reworked but I found they were starting to become like blueprints, destroying the immediacy of the work. I now like that a work might turn out far from my initial intention - there’s this Chinese whisper effect that happens in the process now. Sometimes after a day in the studio I’m not happy with a work or whatever, but I come in the next day and it seems to have shifted round, the limb now looks like a cactus or something and I think that’s interesting. I start to make associations with my own work that I never at first intended to be there. 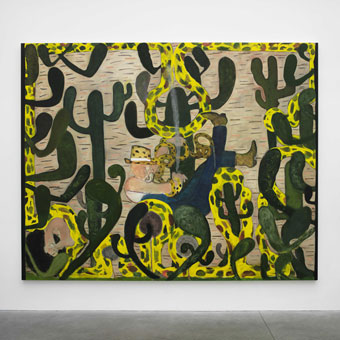 AR: There is a play of perspective within your works depending on how close or far away the viewer stands. The forms you use are very basic, almost collage-like, but up close it becomes obvious the brush handling is so detailed and tightly controlled.

RM: I think a lot of recent painting over the last couple of years has had a very shallow depth of field. With these I’ve tried to give a much more varied sense of scale, there’s a good 6 inches before you hit the horizon on many of these works. I’ve tried to get rid of any sense of painterly rules that you traditionally set yourself. When you are a child you literally paint anything, it’s shit but you have that freedom: it still goes on the fridge. Then when you go through art school you go through this learning process of being told what a painting should look like and how you should go about it. It is not that I’m anti-learning, but I just wanted to play with forms, mixing still life, landscape and portraiture together within one work. Just stripping away formats. There something operating within the weighting of the works too, they all feel they are heavier to a particular side of the canvas. With Vanitas (The Ruins of Gin) (2009) I think it’s quite clearly a skull, one of the most recognisable motifs in painting surely, but someone saw it recently and asked why I had painted pots and pans from an aerial viewpoint! I love that there is that room for the subject to shift so dramatically within the works, and I think it stems from the distance perspective you asked about. 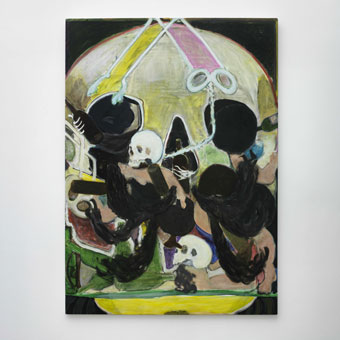 AR: That inversion of rules seems also to be played out in the subject matter. A sense of carnival seems to be being played out, does this link with carnival’s temporary banishment of the rules and hierarchies of society?

RM: I wrote my thesis on the lack of carnival in Britain. During that time I worked as a security guard at the National Gallery, and from there I could see that on every weekend in Trafalgar Square there would be some kind of public celebration of a national holiday: Australia Day, Russian Winter Festival and so on, but there’s was never any kind of parade of the like for something British. The opportunity for this type of burlesque, anarchic celebration seems to be missing. This bled into the narratives of my painting. It’s quite an easy story to tell with the sense of costume, but its one you can mine richly. My scenes are hopefully not antiquated but ones that morph through times and cultures. It’s a way of painting a fictional place, but borrowing heavily from history, art history or narratives from popular culture and the motifs that they proliferate.

AR: Your use of art historical references must be influenced by your time at the National? Are they deliberate or just informed by the very nature of painting as a medium?

RM: Some references are deliberate definitely, but some are just a sense of taking on board the world around, that could be a historical painting or it could be a piece of chewing gum on the pavement that might look like a face! A lot of the references come retrospectively, I’ll make a work and then recognise its lineage afterwards. I find that fascinating. The references don’t doth their cap, they’re not tokenistic, but they do recognise painting’s lineage. Take Allegory of Prudence, The Family Bullrush (2009 – 2010), it’s based on the Titian’s An Allegory of Prudence (1550 – 65). I liked the work because it’s the only of work his with text in it, but I’ve taken the motif on only to change it’s three basic form to three anthropomorphic bulrush heads.

AR: A lot of the time it seem less that inanimate objects have gone through the anthropomorphication that, for instance The Happy Cactus (2009) has experienced, but that living subjects have turned to objects. The disembodied head in Snow Shaker (2009) or the packed legs in Limbs in transit (2008 – 2009) for example. The process almost seems reversed. 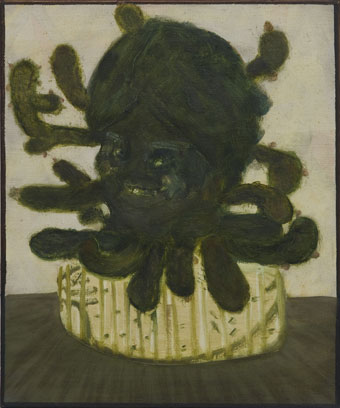 RM: On a practical level it certainly happens both ways, maybe it’s a facet of that frustration of when you set out to paint something and it doesn’t quite turn out how you want it. That’s not to advocate lazy painting, but when it doesn’t turn out as you imagined, but takes on its own sensibilities that can be really interesting. Born of a fuck up, X can turn to Y, and Y can turn to Z.