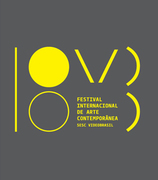 The International Contemporary Art Festival SESC_Videobrasil is the main artistic meeting of the geopolitical South, held every two years in Brazil. It aims to map, disseminate and discuss the emerging production in that circuit. Among its main segments are Southern Panoramas exhibition and related curatorships -  initiatives from which it has created an active world wide network of exchange and cooperation.

As it celebrates its 30th anniversary, the Festival once again places itself under the sign of change in its 18th edition, a stance which has characterized its trajectory from the 1980s until now.

Besides a curated historical segment (featuring works from Videobrasil Collection) that organizes and throws themes adressed in the exhibitions, this 18th Festival's Southern Panoramas show includes both works selected via open cll and works by guest artists. While the entry-based selection always brings an important element of surprise, risk, and renewal, the input of guest artists adds vigorous tensing-up relationships to the show’s curatorial construction, deeming its proposal denser.

+ Meet the artists shorlisted through the open call and the curatorial committee.

+ Soon, further information about this very special edition will me published. Subscribe to our newsletterand stay up-to-date.