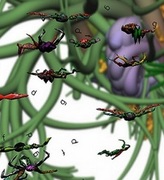 Call for entries for the VIDA 15.0 Art and Artificial Life International Awards. Launched in 1999 by Fundación Telefónica, VIDA was founded to promote creation in this unique field through a recognition of the pioneering work of the artists.

Over these fourteen years, VIDA has become one of the most prestigious awards in the art world, and the only one in the world dedicated to the study of life. With each new event, the awards have seen great progress made in the work to promote and stimulate an environment in which art, science and technology converge.

We are pleased to announce the launch of VIDA 15.0, an edition featuring several novelties. This year we have introduced the Telefónica I+D Incentive award. The winner of this new prize will receive assistance from a Telefónica team of experts in research, development and innovation and will be invited to the Telefónica I+D Research Centre in Barcelona. Moreover, in this year’s edition the general public will also be able to participate via our website with the People’s Choice Award. One of the honorary mentions will go to the project that receives the most votes after the jury makes its preliminary selection. The voting process will be open to all online users.

Each participant may only submit one project to each category.

This category awards projects which must have been developed and produced after 2011.  Winners of previous editions are welcome to participate again, and projects that received “Incentives for Production” in past years and have since been completed are also eligible to participate. There will be three winning projects selected by the jury: First Prize: 18,000 euros (*), Second Prize: 14.000 euros (*), Third Prize: 8,000 euros (*).

In addition to the winners of the three main prizes, we will also choose seven participants to receive honourable mentions and compete for the special People’s Choice Award. Of these mentions, only the People’s Choice Award is endowed with a cash prize, the amount of which will be 2,500 euros.

The People’s Choice Award will go to the project that receives the most votes from the public in the seven days immediately following the announcement of the official award winners. Votes will be cast electronically on the VIDA website and social networks.