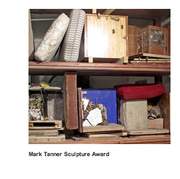 Time: September 30, 2013 at 6pm to May 31, 2014 at 7pm
Location: UK
Website or Map: http://www.standpointlondon.c…
Event Type: competition
Organized By: The Mark Tanner Sculpture Award and Standpoint Gallery
Latest Activity: May 21, 2013

The Mark Tanner Sculpture Award relaunched as a National Award in 2013.

The Mark Tanner Sculpture Award is unique in its combination of offering both financial support towards the production of new work and a solo exhibition to an exceptional emerging sculptor.

The Tanner award is a partnership project by Standpoint Gallery and the charitable trust set up in memory of the sculptor Mark Tanner, who trained at St Martins and was one of the first artists to show at Standpoint. He died in 1998 after a long illness.

Standpoint Gallery is an independent, artist run project and exhibition space with charitable status. The Tanner award forms an important constituent part of our core aims - to act as a platform for emerging artists outside the commercial gallery system, to support the diversity and vibrancy of artistic production, to promote excellence and commitment in the artist as maker, and to provide an arena for artists’ networks and professional development.

The award is aimed at sculptors who are making ambitious, outstanding work within fine art practice, and we are particularly interested in work that demonstrates a commitment to process and material.

There is no age limit. We seek to give the award to an artist who demonstrates the development of a mature practice, but to whom the prize would make a considerable difference.

The deadline for 2013 applications has now passed.

A book showcasing the work of the ten winners to date, and situating the award within contemporary and recent sculptural practice, will be published by Black Dog in March 2013. Making is Thinking is to be edited by Standpoint director Michael Taylor, and will include essays by critic Martin Herbert, artist and curator Fiona MacDonald and curator Matilda Strang.

An exhibition of the ten winners of the award to date will take place at Standpoint Gallery in May-June 2013.

RSVP for The Mark Tanner Sculpture Award to add comments!