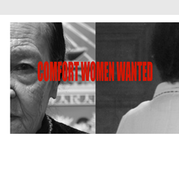 HVCCA is pleased to collaborate with Hauser & Wirth Gallery to stage this special event and screening in New York City.

Chang-Jin Lee’s “COMFORT WOMEN WANTED", which was originally presented at The Incheon Women Artists’ Biennale (Korea, 2009), brings to light the memory of 200,000 young women, referred to as “comfort women,” who were systematically exploited as sex slaves in Asia during World War II and increases awareness of sexual violence against women during wartime.

The text "COMFORT WOMEN WANTED" is a reference to the actual advertisements which appeared in newspapers during the war. When advertising failed, young women were gathered from Korea, Taiwan, China, Indonesia, the Philippines, Thailand, Vietnam, Malaysia, and the Netherlands, and forced into sexual slavery. Based on her interviews with Korean, Chinese, Taiwanese, Indonesian, Filipino, and Dutch "comfort women" survivors, as well as a former Japanese soldier from W.W.II., the video stands now as the narrative of the power of the time and place. Despite growing awareness of the issue of trafficking of women and of sexual slavery as a crime against humanity, this particular history has gone largely unacknowledged.

This project attempts to expose this instance of organized violence against women, and to create a constructive dialogue for the future by acknowledging their place in history.