It is not only fitting but something of a delight that, just over a century since Ruth Borchard’s birth, her stunning collection of self-portraits, by leading British 20th Century artists, should be marked by a new National Self-Portrait Competition. Her own collection was a labour of love growing out of her interest in diaries and other autobiographical material and her method of acquiring it, by offering the artists concerned the modest sum of 20 guineas was both shrewd and cheeky. However, she was rarely refused.

Today, in the age of instantaneous digital image-making, it might be assumed that self-portraiture has fallen from favour. Not so; it is as vigorous and as popular as ever. Whatever approach is taken to this apparently circumscribed activity (the response to one’s reflection in a mirror) Celia Paul’s prize-winning entry is characterised by a merciless, almost forensic scrutiny that transcends mere appearance. 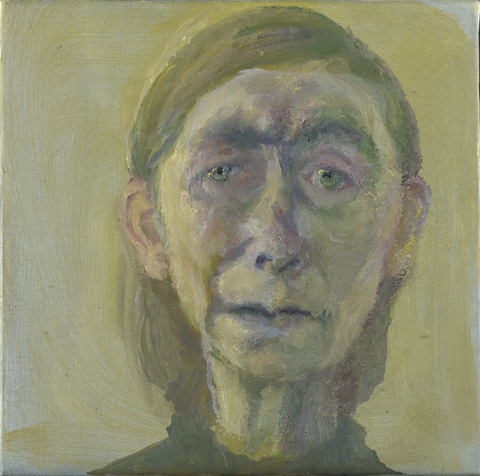 Celia Paul was born in 1959 in Trivandrum, India and attended the Slade School of Art, London from 1976 – 1981. She has exhibited widely and has works in many public collections including the British Museum, the V & A and the Metropolitan Museum, New York. Lucian Freud was of great influence to Paul during her student years and she appeared in many of his paintings.

In the last 20 years Celia Paul has emerged as one of the most remarkable and original painters working in the figurative tradition. Her paintings and drawings are intimate portraits of people she knows well and invariably depict a single model or group. "My work is about people and their emotions", she has said. Her dark toned paintings are reminiscent of old masters and share an interest in the effect of light. Her paintings often have a monumental quality, but she is equally adept at capturing emotion in a small soft-ground etching.

The Ruth Borchard Collection with its new acquisitions will be shown at Kings Place Gallery in the autumn of 2012.