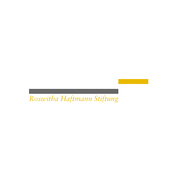 In the late 1980s Roswitha Haftmann was already planning to set up a foundation to which she could leave the greater part of her fortune. The relevant documentation was drawn up on 28 January 1998 and the Foundation was recorded in the Register of Companies in autumn 1999 after the death of Roswitha Haftmann.

The aim of the Foundation is to recognise outstanding achievements in the visual arts. To this end, the Foundation regularly awards the valuable Roswitha Haftmann Prize to a living artist. Prizewinners are selected solely on the basis of the artistic significance of their work, without regard to their personal circumstances (nationality, age, gender, etc.). The Prize is awarded in Zurich, as far as possible during a public event in the Kunsthaus. The Foundation can also instigate, support or present exhibitions representing the work of the prizewinner.

The value of the Roswitha Haftmann Prize, the timing of the award and the selection of the prizewinner are all under the jurisdiction of the Board of the Foundation.

Previous prizewinners can be viewed HERE.

The BOARD and the JURY.

Roswitha Haftmann was born on 11 January 1924 in St. Gallen (Switzerland). After attending the Cantonal School in St. Gallen, in 1944 she graduated from the Eidgenössisch Technische Hochschule Zürich with a teaching diploma in sports. In 1948 she also qualified to teach German, French and English. Between 1949 and 1955 she combined teaching and learning, earning her living in the USA in a variety of posts; in 1949 she met her French husband-to-be, Claude Violett, whom she married in 1950. She worked as a model for American newspapers and agencies until 1955.

On her return to Switzerland, between 1956 and 1959 she had a number of teaching posts in Zurich. Then began her lifelong involvement in art: Director of the Galerie Internationale d’Art Contemporain, Paris (1960); on the staff of the Galerie Krugier, Geneva (from 1963); Director of the Galerie Marlborough, Zurich (1971); in 1973 she opened her own Galerie Modern Art. Here she showed artists whom she knew and/or liked, such as Hans Arp, Max Ernst, Hans Hartung, Oskar Kokoschka and Georges Mathieu.