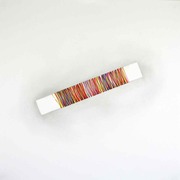 A solo show of drawings and sculpture by the artist Alan Franklin, is the focus of a new exhibition, Precession, by fine art gallery ‘One Church Street’, opening on 14th February 2014.  The drawings originate from simple, familiar processes and repetitive mark making, but result in works that are temptingly intriguing, delightfully unexpected and profoundly meditative.  The idea of a wobble suggests an unpredictable, or perhaps an accidental divergence from a dynamic system.  Franklin’s works play subtly with the fault in a rule, or a slip from the expected.

By combining a playful use of ordinary materials (such as elastic bands, birdseed, salt or sugar) with simple, pre-determined processes, Franklin embarks upon a drawing.  Certain initial or ongoing conditions (such as the availability or cost of a material, the ambient temperature that will affect the flow of ink from a biro, or the random choice of colours from a box of paints) begin to cause events (wobbles), which create surprise and visual interest.  Franklin is mindful of such determinants, allowing the unexpected, and even conspiring to invite a particular cause to create a startling effect.  This inventive and whimsical approach is the hallmark of all his work.

‘I want my work to stray or wander away from what we think we know in order to be surprised - not by something new, but by something which is already there.’

Similar to a wobbling spinning-top, precession means a gravity-induced, slow, and continuous change in the orientation of an astronomical body's rotational axis.  In particular, it refers to the gradual shift in the orientation of the Earth's axis of rotation.  The exhibition title Precession comes from Franklin’s interest in the physics of the universe and the interconnection of all things - sometimes referred to as the butterfly effect.

A Talk will be held later in the exhibition programme

Alan Franklin is Senior Lecturer on the BA Fine Art programme at Bucks New University.  He was awarded an MA in Fine Art from Goldsmiths College in 1983 and has since exhibited his work, mainly his sculpture, on an international arena from London to Japan.  He has completed residences in remote locations such as Iceland, Poland and the Grizedale Forest in Cumbria.  This is one of the first occasions that Franklin has exhibited his drawings.

RSVP for Precession to add comments!