Paradise is the New Hell

"...The circus is a type of art of action with concrete images. Everything in  the circus happens in "real". The dancer is dancing with "real danger" on a real rope, and the tamer with the bear presents only the spectacle of the wild animals tame. To "be real" means that the image is a "precise point" or a "thing". The face of the actor and his "garment" is an image.

If the actor interprets himself, if he remains an actor, then is a "precise point". But, if  he became equal with the personage who interprets, the image that  produces is "mimetic symbol". The passage between the real time  and the theatrical time, the imaginary space to the real one,  is possible to described it with an image, using this image  like a  "precise point". It s necessary to create a flexible mask, to dress your face and  to get a new face at any time, to liberate your senses, although that means to construct a lie from a truth, which is your own face, and with this new "face - lie" to start, by telling the truth".

My aim as an artist is to substitute concepts that belongs to the theatre, traditional theatre, modern theatre applying them to visual arts and observe the effects that these concepts could affect the plasticity of the images, constructing a parallel equivalent of each one of these concepts.

The main subject of the exhibition are fragments on video performance based on the theatrical  play Marat Sade of Peter Weiss, who performed first time in Athens, Greece in the National theatre in 1982. The protagonist De Sade was performed by artist s father Giorgos Tsitsopoulos. Director Korais Damatis. Filippos very young by that time, was taking part in the play as watching the rehearsals of his father.

After his father death, Filippos included parts of the dialogues and the monologues , his father did in the play, combine it, with several and strange elements that the artist likes, fragments of other plays, invented texts, actions and poetry among others of Peter Weiss, Beckett, Harold Pinter, Peter Murphy, Filippos Tsitsopoulos, Jannis Kounelis, Jimmie Durham,  , John Keats, Tennessee Williams, Giorgos Tsitsopoulos, Juan Carlos Mestre, Dylan Thomas, Peter Handke,  Ángel Alcalá Malavé, T. S. Elliot, John Dowland, W. Shakespeare, William Tallis, (Die Räuber) and fragments of the letters of Friedrich Schiller, Maria Rilke....in one monologue-dialogue with himself creating an independent video play and work at a time. 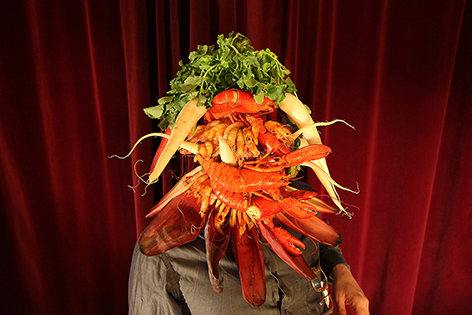 RSVP for Paradise is the New Hell to add comments!