January 2017 exhibitions: Enigmatic Realms and Kaleidoscope of the Mind 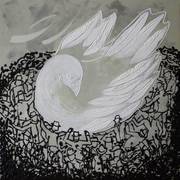 Agora Gallery welcomes the new year with two exhibitions that dive into the most inventive corners of contemporary art. Enigmatic Realms is a collective featuring eight artists who together truly touch every part of modern society. There are inquiries into technology alongside placid images from the seashore. There are highly allegorical narratives, and there are jolting images of objects in motion. What ties each artist together is the unifying determination to see everyday people, places, and things in a new way. Similarly, Kaleidoscope of the Mind is a collective exhibition in which everything ordinary becomes new again. These artists push the technical boundaries as well as the visual ones; there is slashed canvas, painted writing, and thrown paint. These works do not shy away from images and juxtapositions that are confusing and enticing for their unfamiliarity. Between the two exhibits, Agora Gallery is ushering the new year with both techniques and aesthetics that have never been seen before.

Kaleidoscope of the Mind

RSVP for January 2017 exhibitions: Enigmatic Realms and Kaleidoscope of the Mind to add comments!