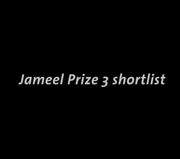 The Jameel Prize at the V&A and the international touring exhibition are in partnership with Abdul Latif Jameel Community Initiatives. The prize was conceived after the redesign and redisplay of the V&A's Jameel Gallery of Islamic Art, which opened in July 2006.

There were almost 270 nominations for the Jameel Prize 3 from countries as diverse as Algeria, Brazil, Kosovo, Norway and Russia. A panel of judges, chaired by V&A Director, Martin Roth, selected the shortlist of ten artists and designers. Martin Roth said:

'This, the third Jameel Prize, has continued to attract nominations from around the world, and for the first time the shortlist features work from Saudi Arabia, Azerbaijan and India. The Jameel Prize 2011 touring exhibition has also attracted a wide audience, showing in America, Spain and France to more than 20,000 visitors. We are delighted to continue our work on the Jameel Prize with Abdul Latif Jameel Community Initiatives (ALJCI).'

The work of the shortlisted artists and designers will be shown at the V&A from 11 December 2013 until 21 April 2014. Although the shortlist is diverse, all the artists and designers are directly inspired by sources rooted in the Islamic tradition. The works on show will range from Arabic typography and calligraphy to fashion inspired by the Hagia Sofia in Istanbul and from social design and video installation to delicate and precise miniature drawings.