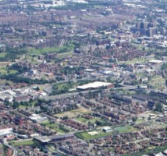 Future City, a Pop-Up Mathaf project initiated by Mathaf: Arab Museum of Modern Art, Doha, Qatar in partnership with the Liverpool Biennial and in collaboration with Tate Liverpool, and Liverpool John Moores University, will take place in various locations in Liverpool, as part of Qatar UK 2013 Year of Culture, on Friday 27 and Saturday 28 September 2013.

Future City investigates the connections and asymmetries between cities and considers the optimistic agendas for urban transformation surrounding the partner institutions. It is also an exploration of the ability of contemporary art and cultural knowledge production to imagine urban and social development in a global context.

The programme includes a day-long forum with contributions from distinguished thinkers and practitioners in the fields of art, architecture, urbanism, visual culture and sociology on Friday 27 September at Liverpool John Moores University. A series of expeditions exploring the city of Liverpool will take place the following day, including a boat tour of Stanley Dock, an excursion to the Homebaked bakery in Anfield with Dutch artist Jeanne van Heeswijk, and a field trip led by artist Bouchra Khaliliand writer and curator Omar Kholeif. There will also be a Futurist Library produced by London-based designer Bahbak Hashemi-Nezhad at Liverpool John Moores University for the duration of the event.